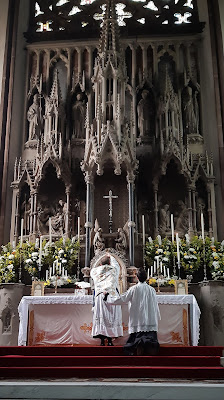 In his passages composed for today, as found in the Liturgical Year, Dom Gueranger draws attention to the glories of Christian civilisation. He describes the great beauties which exist as a result of Christianity and recalls that it is through the inheritance of faith that civilisation springs. When Western civilisation seems to all but have abandoned God and the practice of religion, it can be hard to imagine scenes described by the holy abbott, where great pagan nations converted to the practice of the true faith. Yet these great events did indeed happen and the inheritance of faith has been passed down in each successive generation.
However, whilst sitting in front of a computer screen, following along virtually with the Holy Mass from a distance, it is hard to see what exactly the inheritance of faith is today. For we do not live in an age of great Catholic empires or rulers, nor is the practice of religion even smiled upon let alone promoted. What then is left us in this age - what is our inheritance from those glorious centuries past? Is it really nothing at all? Such a thought can very easily spring to mind.
But no, stay these thoughts for just a few moments and recall what was said a few lines earlier, namely the (albeit virtual) ‘attendance’ at Mass. Our inheritance is not the visible dominion of an earthly ruler, devoted to the practice of the faith, but instead is the real presence of Christ in the tabernacles around the world. Our inheritance is also found in the inestimable sacrifice of the Mass, the Mass of ages, passed down to us by saints and great popes, which teaches the most profound theological truths about God Himself. The presence of Christ upon our altars, Whom we worship in the Mass, is indeed the greatest inheritance that we could ask for.
If this Divine presence and the greatest act of worship compose the inheritance which has been bestowed upon us, then how ought we to take the utmost care and protection of these gifts. A precious jewel or heirloom, left to the children of a family and handed down through the generations, is treated as a prized possession of great value and with many sentimental memories attached to it. Or again, a magnificent estate granted to the children of some lordly family, demands to be treated with the proper respect and care due. How much do these worldly gifts of inheritance pale in comparison to the incomprehensible value of the sacrifice of the Mass, whereby God is made present before our eyes! How much more ought the Mass to be treated with the greatest respect than the precious jewels or family estate and what supreme dignity should each Mass be offered with! Furthermore, this inheritance should be made readily available to all the children of God, so that the inheritance which He so lovingly instituted for all ages, might be bestowed upon all His faithful flock.
The splendour of the traditional liturgy.

The glory of the inheritance of faith is most evident in the traditional liturgy of the Church, which by its many rubrics, gestures and prayers contains a synthesis of the faith. Every word and action has been so stipulated as to convey spiritual and theological truths. Indeed many beautiful works have been composed explaining the meaning of the words and gestures of the Mass. Dom Gueranger himself penned one such work called, on the Holy Mass. For example, he mentions the reasoning behind the confiteor, by which the priest and server (on behalf of the congregation) confess their faults to God before ascending to the altar and entering into the holy celebration of Mass. No word is allowed to be changed of those which have been prescribed by the Church for the celebration of Mass. Having ascended the steps of the altar, the celebrant kisses the altar stone. The stone is emblazoned with five crosses to recall the face wounds of Christ; the kiss is full of the “twofold certainty that we shall find life by consenting to lose it, and that He involves us in His death only to make us share His resurrection”. (1)
The beautiful texts of the Offertory prayers express the sacrifice of Christ and contains prayers which in themselves could be the subject of great treatises.(2) Such richness of teaching cannot be found elsewhere other than in the sacrifice of the Mass. Indeed, in the sacrifice of the Mass, we have the very source and summit of our spiritual lives, for through the Mass and reception of Holy Communion we encounter Christ in a completely unique manner. It is the sacrament whereby we are united most intimately with God as He is immolated upon the altar. The spiritual life is centred upon sacrifice of oneself to God and in the sacrifice of the Mass, God sacrifices Himself in order that He might give Himself to us.
In reading the many pages explaining this supreme act of worship, one cannot fail to be filled with awe and wonder at the great mystery before him. There can be no greater inheritance than the Holy Mass! St. Leonard of Port Maurice tells us that the principal excellence of the Mass “consists in being essentially, and in the very highest degree, identical with that which was offered on the cross of Calvary”.(3)  As such, the effects of the Mass are unlimited, since it is the sacrifice of Christ offering Himself to God. The effects of Mass are directed first to God and thence to us, and these effects are always perfectly and wholly produced due to the principle priest, who is Christ. Indeed, those effects which pertain to us are bestowed according to the manner in which we are disposed to receive them and hence it is only our personal lack of devotion and sin which limits the effects which each Mass has for us.
What glorious inheritance is this that offers such a perfect offering to God and bestows upon His children countless graces!

How then ought we to avail of our inheritance, when the world seems so opposed to the practice of faith? In what way can we preserve the wondrous gift of faith and pass it on to the next generation of the faithful?
The saints constantly recommend that we strive to increase our devotion at every Mass which we attend, considering that each might be our last. Indeed, the more we understand the infinite worth of each Mass, then the more we are drawn into a deeper union with Christ in the intimacy of the sacrifice. Perhaps, then, one very effective way of protecting our inheritance is by attending Mass more regularly and with greater devotion - offering humble adoration to God and uniting ourselves ever more with the sacrifice of Calvary which is re-produced before our eyes. Whilst the choirs of angels descend to worship their Lord at the consecration, it is not uncommon for the pews to be relatively empty, as we treat our inheritance with less care and attentionthan the more earthly inheritance left us by our parents.
The great truths and beautiful mysteries are thus not availed of, and more often than not we have only ourselves to blame as we enter a decline in the spiritual life. Indeed, as many prelates have recently stated, why should we be surprised at the divine punishment of being deprived of the sacraments, when He has been treated so shamefully for decades. We can take these words of Bishop Schneider as an explanation for the current crisis whereby we are unable to access the great gift of our inheritance:

The situation of the public cessation of Holy Mass and sacramental Holy Communion is so unique and serious that one can discover behind all of this a deeper meaning. This event has come almost fifty years after the introduction of Communion in the hand (in 1969) and a radical reform of the rite of Mass (in 1969/1970) with its protestantizing elements (Offertory prayers) and its horizontal and instructional style of celebration (freestyle moments, celebration in a closed circle and towards the people). The praxis of Communion in the hand over the fast fifty years has led to an unintentional and intentional desecration the Eucharistic Body of Christ on an unprecedented scale. For over fifty years, the Body of Christ had been (mostly unintentionally) trampled by the feet of clergy and laity in Catholic churches around the world. The stealing of sacred Hosts has also been increasing at an alarming rate. The praxis of taking Holy Communion directly with one’s own hands and fingers resembles ever more the gesture of taking common food. In not a few Catholics, the practice of receiving Communion in the hand has weakened faith in the Real Presence, in trans-substantiation and in the divine and sublime character of the sacred Host. The Eucharistic presence of Christ has, over time, unconsciously become for these faithful a kind of holy bread or symbol. Now the Lord has intervened and deprived almost all the faithful of assisting at Holy Mass and sacramentally receiving Holy Communion.(4)

Just as we ought to attend to it with the greatest devotion, so we ought also the protect the Mass jealously, lest we be separated from it. Each Mass is an infinite act of adoration to God, and should be given the highest place in society along with the greatest reverence and the utmost dignity in its celebration and all that pertains to it. Our inheritance is not valued by financiers or seen in the many acres of some great estate. Instead it is the greatest act on earth: an act by which we approach God in a way unimaginable as transubstantiation occurs before our eyes.
Leaving aside for a moment, the external acts which must be done in order to safeguard the celebration of Mass, it is time to examine ourselves, according to the advice of the saints. As Bishop Schneider reminds us, the Holy Mass has been grievously mistreated and taken for granted. Perhaps our greatest means of protecting the Mass is by increasing the devotion with which we attend it and seeking to develop such a love of it that we cannot bear to be separated from it. If the Church in general, namely all of us who have been granted this inheritance, were to treat it thus, then perhaps the current deprivation might not be occurring.

Suggested reading regarding the explanation of the Mass:
Rev. Von Cochem, The Holy Sacrifice of the Mass explained.
Don Pietro Leone, The Destruction of the Roman Rite.
Dom Gueranger, On the Holy Mass.
St. Leonard, The Hidden Treasure - Holy Mass.