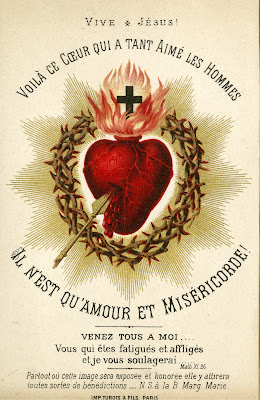 In what manner then, is this devotion so important? Pius XII mentions that firstly, Christ’s heart is the noblest part of human nature and is hypostatically united to the Person of the Word. Thus we must pay due reverence to His heart as we would the Son of God Himself. But more than this, the pope mentions that “His Heart, more than all the other members of His body, is the natural sign and symbol of his boundless love for the human race”.(1) Just as with any man, the heart is considered the symbol of love for another, the pope teaches that it is so with Christ. Thus the chief sign of the love of Christ for His Father and for man is His Sacred Heart. It is with this beating heart, the symbol of the deepest and most perfect love, that Christ loves wayward man and loves His Father. He was endowed with a true body and real emotions, just as is any man, yet His love exceeded all of mankind’s love throughout history. It is a boundless love which cannot be contained nor hidden. His most Sacred Heart is thus the symbol of this love, as Pius XII teaches. In reverencing this Heart we reverence Christ and become more united to Him.

Indeed, it is a devotion based upon humility, which is placed in stark contrast to the proud vulgarities which dominate this month in modern society. Through reverencing the Sacred Heart, we reverence the purest and most perfect act of true love, based not on selfishness or sensuality, but on selfless sacrifice. In loving the Sacred Heart, we love that “source of expiating blood which effaced the sins of the world”.(2) We have thus a devotion not only to the corporeal but to the spiritual - to the beating heart which was pierced on the cross and which pours out His blessings upon us each day.

In loving the Sacred Heart, we are responding in precisely the manner which is fitting to do, since is this not the reason that Christ revealed that we should love Him thus? In fact we can relate this to any devotion to Christ, particularly a devotion to the Crucified Saviour. For in proffering Himself to us, and enabling us to know and love Him more through such devotions, He requires of us that we return such love through availing of these devotions. The devotion to the Sacred Heart is the offering from Christ to win the cold hearts of modern man. Love moved God to create man, to become incarnate and die on the cross. Love moved God to give to us the Holy Spirit and the great gift of the Holy Eucharist. Love has now moved God to reveal such a devotion to Him through His Sacred Heart, that we might atone for the coldness with which we have treated Him and return His love. He longs for us to return His love to Him.

Indeed, in an age when material and sensual pursuits are foremost, the devotion to the Sacred Heart is particularly poignant, since it is a devotion to true and lasting Love. Instead of focussing on distortions of love, such a devotion allows us to turn to God as the proper end of all our endeavours and the highest good. Such devotion to the Sacred Heart, alongside the Immaculate Heart, can be the remedy for modern society that hardens its heart to the point of blaspheming God and killing the innocent unborn. We need this devotion more than ever, and the world desperately needs it in order to have any hope of turning back to God.

Consequently, it is not merely advisory but almost a duty of filial love, to reverence and honour the Sacred Heart, in order that we might partake more fully of the goodness of His love which He wishes to impart to us. There are so many graces and blessings which God wishes to bestow upon us if we only ask Him and turn to Him in this devotion. The very heart that we adore in this devotion is the heart that cannot stop loving and calling us to Him. He is not content with giving us this devotion as a means to unite ourselves with Him, for Christ then further blesses those who avail of this means. It is an opportunity to console His suffering Heart through the sorrows and pains which He has endured as a result of our sins; so also it is an opportunity to rejoice with Him in the glories which He has won through His salvific redemption. But chiefly it is an opportunity to grow in love and adoration of the sweet Saviour, who so ardently wishes that we might come to know and love God ever more perfectly.

Here below are the twelve promises of the Sacred Heart to those who practice a devotion to His Sacred Heart:

Here also is the Litany of the Sacred Heart.