The problem of Two Masters. 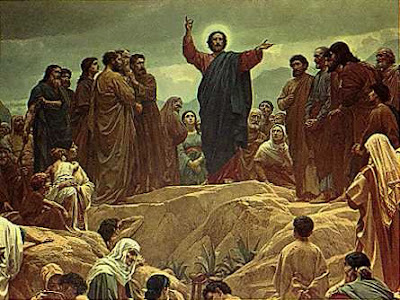 “No man can serve two masters; for either he will hate the one and love the other, or he will sustain the one and despise the other. You cannot serve God and Mammon.”

With these words, the Gospel of this Fourteenth Sunday after Pentecost begins. It is a passage so well known and one could easily proffer his own simple thoughts on the meaning of the text - ie. don’t be a money grabbing Scrooge. This basic type of understanding can be gained by just perusing through the lines of text and is often the only message taught. Yet by doing so, so much is missed in this Gospel. Indeed the entirety of the passage has a special resonance today, in a world which is so solicitous with preserving only physical health to the point of insanity. Such is of course foolishness, for later in the Gospel we read: “be not solicitous for your life, what you shall eat, nor for your body, what you shall put on. Is not the life more than the meat: and the body more than the raiment?”(Matt 6:25)

Indeed, there are so many themes in this Gospel that much could be written on each, but if they had to be summarised it can be termed thus - serve God only and trust in Him. For those of the world and those who do not choose God as their master, life becomes instantly twisted and centred upon humanity instead of upon God. This we see in the present global situation, in which Communism is implemented across nations and states, all apparently for the sake of preserving human life. It is this serving of mammon and self that leads men to view fellow men, particularly those without a mask, as being as dangerous as a nuclear explosion. Because when God is rejected in favour of man and mammon, the focus of life instantly moves towards oneself and the goods of the body. The ultimate good of the body is life and health, and hence society becomes increasingly concerned with the preservation of physical health at all costs. No matter the insanity of the demands made upon society, modern man will always cave, since if he serves mammon and self then he will always be chiefly concerned with himself. The spiritual health of the soul is of course left by the wayside.

One must choose between two masters, either God or the devil, for such is what the choice truly is. If one follows modern society and chooses the devil, then he will be constantly concerned for his every physical desire, since he cannot see beyond this. His heaven will be found in the lusts of the flesh described in today’s epistle: “the works of the flesh are manifest, which are, fornication, uncleanness, immodesty, luxury, idolatry, witchcrafts, enmities, contentions, emulations, wraths, quarrels, dissensions, sects, envies, murders, drunken­ness, revellings, and such like”.(Gal 5:19-21) Is this not a description of current society? Indeed and sadly so, but is this not also a description of much of the modern Church: the Church is so widely dominated by modernism that dogma and doctrine are sidelined in favour of idolatry, sacrilege, immorality and general subversion of the faith?

Yet those who concern themselves with these earthly thoughts and pleasures, serving their infernal master in such a way, have had their reward on earth, for St. Paul states that “they who do such things shall not obtain the kingdom of God”. Such is the path for those who place their trust in man instead of God. When so much is given to even the lilies of the field and the birds of the air, and so much more is promised to the children of God, (cf Matt 6:28-30), why is it that modern man cannot put his faith in the providence of God? Is it perhaps because he does not wish to, preferring to enjoy the delights of this life rather than to “seek ye therefore first the kingdom of God”? (Matt 6:33). If this call to eternal beatitude is rejected, then so is God rejected and thus one de facto becomes a servant of mammon, of self and the devil. These masters cannot save the soul, but that is no matter to modernity since the soul is completely disregarded. Consequently, modern society becomes exactly that which God condemns, full of those who cry out “what shall we eat, or what shall we drink”, what vaccine shall we have, what steps must we take to preserve our miserable lives? How do such petitions serve the final end of man, when they are directed simply to the service of mammon? Truly “after all these things do the heathens seek”.(Matt 6:32)

However, if one chooses to serve the Divine Master, the thoughts and concerns of earthly life pass into nothingness when compared to the greatness of heavenly eternity. The service of God leads ultimately to happiness, no matter the apparent hardships which are endured on this earth. When the Church truly serves God, She places the salvation of souls foremost and takes every measure necessary to proclaim the truth. A soul engaged in the service of God comes necessarily to detest the service of himself and of mammon: “either he will hate the one and love the other: or he will sustain the one and despise the other”. (Matt 6:24) By answering the call of God to serve Him, life is thus ordered accordingly and more properly. Every event is understood to be under the providence of God, and nothing ought to unsettle such a soul who is under the care of God. As a result, love of God and properly ordered reason are the guide whereby one’s actions are determined. Physical health is not seen as the end of man, but as a means to the end which is heaven. Unlike the agenda pushed by current governments and international bodies, the service of God is one which leads to union with Him and to life of the soul.

It is a life lived in accordance with the will of God, turning to Him as the pinnacle as well as the centre of life. Such a life is that life of union with Him, practicing the spiritual life and the virtues. When one is so devoted to this Divine Master then the trials of life, which so confound the servants of mammon, are able to be endured with happy and virtuous resolve. In fact, it is a life of generous self-sacrifice whilst having faith in the generosity and largess of God. Hence, Christ teaches “seek ye therefore first the kingdom of God, and his justice, and all these things shall be added unto you”. (Matt 6:33)

The marks of a true servant of God are presented by St. Paul in the epistle, when he mentions the fruits of the Holy Spirit: “charity, joy, peace, patience, benignity, goodness, longanimity, mild­ness, faith, modesty, continency, chastity”. (Gal 5:22-23) They are in direct opposition to the marks of the servants of mammon and are signs whereby the children of God are distinguished from the children of the world.

In essence then, this Gospel is a summary of the New Law, commanding us to serve God and trust in Him, rather than to serve ourselves and trust ourselves. It is a call to judge all things according to the Gospel and in so far as they are in line with Christ. Against this heavenly counsel, we have the recent orders of modern governments and organisations such as the W.H.O and the U.N, advocating for the implementation of Communism as an apparent means to take the place of God. We must also use this Gospel to examine the words of those even in the Church - groups such as the Catholic Bishops Conference of England and Wales who call for the use of vaccines made using the cells of murdered innocents. So again must we examine the actions of those leaders, clerical and secular, who have used the guise of concern for health as a means to prohibit worship of God. These crimes by those who are called to lead the faithful are instantly explained when we realise that such people have chosen mammon, self and the devil as their master.

If one chooses to serve a master other than God, then one cannot also follow the teaching of the Gospel. The two are incompatible. What we see before our eyes in the world today is a society which is nearly completely at the service of self and the devil, whether this is an explicit or implicit decision. Secular leaders have abandoned their duty of leading the people to the attainment of the common good, which is ultimately the attainment of God through virtuous living. Ecclesial leaders have scorned the dignity and responsibility of their lofty vocation by softly undermining and corrupting the faith. For the faithful who seek to follow the Divine Master, the doors of the churches are shut and the sacraments denied. Power is abused as the reception of Holy Communion on the tongue is illicitly prohibited. Fear is spread whilst God is further disregarded and offended. The servants of the devil have thrown themselves headlong into his service and it remains to the faithful few to stay loyal to the true Divine King.

But - “seek ye therefore first the kingdom of God, and his justice”. The service of God has no equals and its reward is God Himself. It calls for two forms of service, interior and exterior. The inner service of course relates to the practice of the spiritual life, the virtues and the ordering of one’s daily life so that God is at the centre. The exterior is the partaking in the liturgical life of the Church but, especially nowadays, includes Her public defence, as well as strong, active action against the forces of evil which seek to overthrow the Church. If we seek first the kingdom of God, then we can have no fear of the forces which oppose Him.