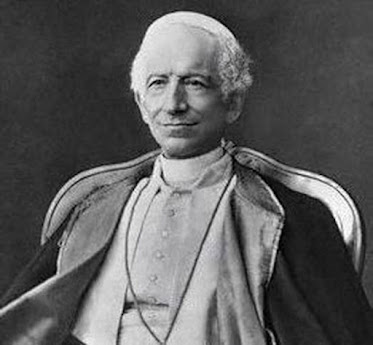 In the month dedicated to the Holy Family, Pope Leo XIII has more to offer the Church, when Her members dwell upon the family which is the model for all families. While the pontiff composed many sections for the Divine Office for the feast itself, portions of Pope Leo’s 1892 Apostolic Letter “Breve neminem fugit” are used in Matins for the feast of the Holy Family, and it is from this text that one can draw when looking for guidance on reading during the month of February.
Part of that beautiful text is reproduced below:

When God in his mercy determined to accomplish the work of man’s renewal, which same had so many long ages awaited, he appointed and ordained this work on such wise that its very beginning might shew to the world the august spectacle of a Family which was known to be divinely constituted; that therein all men might behold a perfect model, as well of domestic life as of every virtue and pattern of holiness: for such indeed was the Holy Family of Nazareth.
There in secret dwelt the Sun of Righteousness, until the time when he should shine out in full splendour in the sight of all nations. There Christ, our God and Saviour, lived with his Virgin Mother, and with that most holy man Joseph, who held to him the place of father. No one can doubt that in this Holy Family was displayed every virtue which can be called forth by an ordinary home life, with its mutual services of charity, its holy intercourse, and its practices of godly piety, since the Holy Family was destined to be a pattern to all others.
For that very reason was it established by the merciful designs of Providence, namely, that every Christian, in every walk of life and in every place, might easily, if he would but give heed to it, have before him a motive and a pattern for the good life.
To all fathers of families, Joseph is verily the best model of paternal vigilance and care. In the most holy Virgin Mother of God, mothers may find an excellent example of love, modesty, resignation of spirit, and the perfecting of faith. And in Jesus, who was subject to his parents, the children of the family have a divine pattern of obedience which they can admire, reverence, and imitate. Those who are of noble birth may learn, from this Family of royal blood, how to live simply in times of prosperity, and how to retain their dignity in times of distress. The rich may learn that moral worth is to be more highly esteemed than wealth.
Artisans, and all such as are bitterly grieved by the narrow and slender means of their families, if they would but consider the sublime holiness of the members of this domestic fellowship, cannot fail to find some cause for rejoicing in their lot, rather than for being merely dissatisfied with it. In common with the Holy Family, they have to work, and to provide for the daily wants of life. Joseph had to engage in trade, in order to live ; even the divine hands laboured at an artisan’s calling. It is not to be wondered at, that the wealthiest men, if truly wise, have been willing to cast away their riches, and to embrace a life of poverty with Jesus, Mary, and Joseph.
From the foregoing it is evident how natural and fitting it was that devotion to the Holy Family should in due time have grown up amongst Catholics; and once begun, that it should spread far and wide. Proof of this lieth first in the sodalities instituted under the invocation of the Holy Family; then in the unique honours bestowed upon it; and above all, by the privileges and favours granted to this devotion by our predecessors to stimulate fervour and piety in its regard.
This devotion was already held in great esteem in the seventeenth century. Widely propagated in Italy, France, and Belgium, it spread over almost the whole of Europe ; thence, crossing the wide ocean, through Canada it made is way in the Americas, and finding favour there, became very flourishing. Indeed, among Christian families, nothing more salutary nor efficacious can be imagined than the example of the Holy Family, where are to be found all domestic virtues in perfection and completeness.
When Jesus, Mary, and Joseph are invoked in the home, charity is likely to be maintained in the family through their example and heavenly entreaty ; a good influence is thus exerted over conduct ; the practice of virtue is thus incited ; and thus the hardships which are everywhere wont to harass mankind, are both mitigated and made easier to bear.