The transitus of St. Benedict 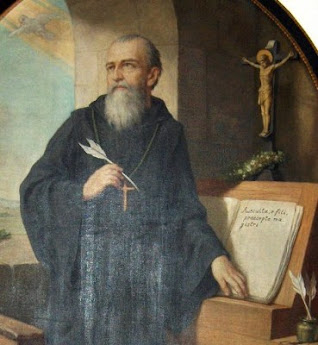 Posts have been absent on this blog of late, although soon to be remedied. A beautiful account of St. Benedict’s life is given by Pope St. Gregory the Great, in his discourses, from which the following description of St. Benedict is drawn, for this feast of his transitus:

“There was a man of venerable life, blessed by grace, and blessed in name, for he was called “Benedictus” or Bennet: who, from his younger years, carried always the mind of an old man; for his age was inferior to his virtue: all vain pleasure he contemned, and though he were in the world, and might freely have enjoyed such commodities as it yieldeth, yet did he nothing esteem it, nor the vanities thereof.

He was born in the province of Nursia, of honourable parentage, and brought up at Rome in the study of humanity. But for as much as he saw many by reason of such learning to fall to dissolute and lewd life, he drew back his foot, which he had as it were now set forth into the world, lest, entering too far in acquaintance therewith, he likewise might have fallen into that dangerous and godless gulf: wherefore, giving over his book, and forsaking his father’s house and wealth, with a resolute mind only to serve God, he sought for some place, where he might attain to the desire of his holy purpose: and in this sort he departed, instructed with learned ignorance, and furnished with unlearned wisdom.

But to celebrate the feast of St. Benedict of Norcia properly, it seems fitting to dwell also on the words of the good abbot of the Benedictine monastery of Our Lady of Fontgombault, Dom Jean Pateau.

“St. Benedict’s undertaking has by far gone beyond the limits of the houses that he founded and of the times in which he lived. By the network of monasteries that were sown on our Old World countries, St. Benedict has made a major contribution to the foundation of Europe on the rock of Christian values. Come hell or high water, the Old World has stood fast and has even spread this civilisation, especially in the African and American worlds…

How can we explain such an influence? The sequence of the Mass calls him magni ducis, a great chief. Monks call him their Blessed Father. More than a chief, St. Benedict has been a Father. If he is the Father of Europe, it is because he has been first Father of his monks.

What is then this fatherhood that is not derived from the bonds of the flesh, and yet seems to hold fruitfulness, as can be seen in the monastic Order? The Apostles have forsaken all to follow Jesus. The same applies to monks. Monastic fatherhood is a living relationship, which conversely entails a living “sonship.” If St. Benedict has become the Father of Europe, it is because he had sons who passed on the heritage that they had received from their Father.

Listen in order to follow, and to come into possession of the heritage, so that you too pass it on, listen in order to serve. The monastery is a school of listening, schola servitii Dei, the school where you learn to listen to God, the school where you learn to serve God. To serve God means to make one’s own the design of God, a design of happiness for each person.

Monasteries have converted Europe not by dint of laws that were revolutionary or going against nature, but merely because they existed and were attractive, because they were striving for man’s happiness. Monks would first arrive in some place, they would clear the land and settle in this place. The neighbours would wonder, consider, become interested, and eventually become steeped in the values of charity, self-sacrifice, peace, that would emanate from the monastic society. The face of Europe has thus changed in fifteen centuries.

Let us apply to nations the words that St. Benedict addresses to his disciple: Where is the nation that desires life and loves to see good days? Listen, O Europe, as thou once didst, to the precepts of thy master, and “incline the ear of thy heart”, and cheerfully receive and faithfully execute the admonitions of thy loving Father… And then thou shalt with God’s help attain at last to the greater heights of knowledge and virtue which we have mentioned above.