Fourth Sunday of Lent - children of the free woman. 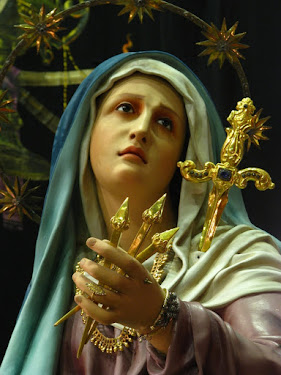 Today’s Epistle presents the account of Abraham having two sons, one by a bondwoman and another by a free woman. The child of the free woman is described by St. Paul as being an allegory of those in the Church. Those who are born of the freewoman, are pointed to salvation, since Christ has freed mankind from the slavery of sin by the death on the cross, which was promised. The Old Covenant, signified by the bondwoman, has been replaced by the New, signified by the free woman. Christ teaches and brings about the New Covenant, sealing it with His blood on the cross and thus liberating man from oppression.

But traditionally this passage has also been used to point to Our Lady, as exegetes have described how the children of Mary are like those of the freewoman - being children of promise who are directed in the paths of salvation by the heavenly mother. She joins her Son in the sacrifice of the New Covenant, paying the price for sinful man. She becomes the Co-Redemptrix alongside, but subordinate to, the Redeemer. The text also marries with the warning God gave to the devil in Genesis. He declared that the seed of "the woman" will "crush thy head" and that there shall be enmities between the devil and Mary. In the Epistle, St. Paul echoes this, and repeats this Mariological theme: "Cast out the bondwoman and her son; for the son of the bondwoman shall not be heir with the son of the free woman."

Before beginning the final few weeks of Lent, when one’s thoughts will turn increasingly to dwelling on the mystery of the passion, and Mary’s co-operation in it, today’s Mass texts provide an opportunity to examine some of the Scriptural passages pertaining to Mary as Co-Redemptrix.

The first reference to Mary in Sacred Scripture contains a wealth of Mariological truths, but especially presents Our Lady as Co-Redemptrix. Genesis 3:15 reads, “I will put enmities between thee and the woman, and thy seed and her seed: she shall crush thy head, and thou shalt lie in wait for her heel”. This passage places Mary in direct opposition to the devil and not merely in a passive manner. It specifically states that she will crush the head of the devil, that she and her seed will be united in their fight against satan. This passage is the basis for all consequent Marian study and presents Mary not only as the Mother of God but also as intimately linked with Him in the process of redemption. Indeed, the Fathers of the Church draw greatly upon this passage in their teaching on Mary as the New Eve. The use of the word ‘woman’ here is crucial, for it is used to tie together the other appearances of Mary in the New Testament: at the wedding of Cana, at the foot of the Cross and as the woman clothed with the sun in the Apocalypse.

By referring to Mary under the appellation ‘woman’, Christ does not act in a derogatory manner, but rather is speaking thus “in the exercise of His divine dignity and mission”. When Mary is styled as ‘woman’ it is in the most beautiful and crucial passages relating to salvation, particularly in the protoevangelium and at the foot of the cross. ‘Woman’ denotes the passages of Marian Co-Redemption in Scripture. This is the case at the wedding feast of Cana, where Mary is responsible for calling to her Son’s attention the need for wine at the celebration and Christ addresses her under the title “Woman”. It is truly fitting that she should be so linked to Him in this very first of His public miracles, for it teaches man about the proper relation which exists between the Mother and her Son. John 2:5 recounts Mary advising the servants that “Whatsoever he shall say to you, do ye”. This act is very much part of Mary’s Co-Redemptive mission as enacted throughout her life: she sees the problem and then brings those servants to Christ. In like manner she brings her sinful children to Christ, aware that only His death on the cross can save man from sin. But she is always united to Him in this saving act, in a subordinate role.

In the Gospel of St. Luke, one dwells upon the account of the Annunciation. At the very moment of her word of acceptance, ‘fiat’, Mary united her will completely to the Divine, consenting and willing “all that her Son’s mission will include”. Mary studied the scriptures and knew the words of Isaiah, “Behold a virgin shall conceive, and bear a son, and his name shall be called Emmanuel”. Mary replied in humble acceptance of the angel’s greeting, (Luke 1:38) aware of the true weight of her fiat. Indeed, from this moment “that she pronounced her fiat, Mary was already in truth the co-operatrix of Christ in the work of our Redemption”. This acceptance of the Mother of God is whole and entire, it is necessarily an acceptance of the motherly mission to be Co-Redemptrix. It is a joyful cry of obedient unison to the will of God.

Of course the most poignant appearance of the Blessed Mother in the New Testament is at the foot of the cross. John describes Calvary thus: “There stood by the cross of Jesus, his mother, and his mother's sister, Mary of Cleophas, and Mary Magdalen. When Jesus therefore had seen his mother and the disciple standing whom he loved, he saith to his mother: ‘Woman, behold thy son’ ”. Her position beside the cross is one of suffering and offering. Christ styles her as ‘woman’, evoking the words of Genesis 3:15; here she is crushing the devil’s head and her seed is performing the salvific and redemptive death. This use of ‘woman’ denotes Our Lady in her role as Co-Redemtrix, fulfilling the words by which she and her Son were promised in Genesis. Mary’s position at the foot of the cross is the climax of her Motherly role, for she unites herself so completely to the Divine will that she abnegates her natural desire for Christ’s life and wills His salvific death. Thus she has the dual sorrow of witnessing Him in death, whilst lovingly willing Him to die in order that He might conquer sin.