Palm Sunday - from palms to the cross. 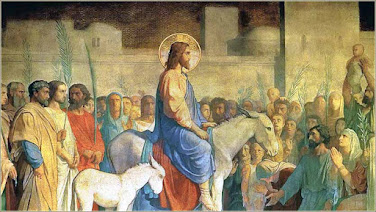 Already Lent is racing towards its conclusion and towards Mount Calvary, but first Christ is to be welcomed by the crowds in Jerusalem on this Palm Sunday. “When the people heard that Jesus was coming to Jerusalem, they went forth to meet Him:With palm branches, cried out: Hosanna in the highest.”

Dom Gueranger explains the events of this day in his Liturgical Year, noting the triumph of Christ in that very city where He was to lose his life for our salvation:

“Thus did God, in His power over men’s hearts, procure a triumph for His Son, and in the very city which, a few days later, was to clamour for His Blood. This day was one of glory to our Jesus, and the holy Church would have us renew, each year, the memory of this triumph of the Man-God. Shortly after the birth of our Emmanuel, we saw the Magi coming from the extreme east, and looking in Jerusalem for the King of the Jews, to whom they intended offering their gifts and their adorations: but it is Jerusalem herself that now goes forth to meet this King. Each of these events is an acknowledgment of the kingship of Jesus; the first, from the Gentiles; the second, from the Jews. Both were to pay Him this regal homage, before He suffered His Passion.”

“The inscription to be put upon the cross, by Pilate’s order, will express the kingly character of the Crucified: Jesus of Nazareth, King of the Jews. Pilate, the Roman governor, the pagan, the base coward, has been unwittingly the fulfiller of a prophecy; and when the enemies of Jesus insist on the inscription being altered, Pilate will not deign to give them any answer but this: ‘What I have written, I have written.’ To-day, it is the Jews themselves that proclaim Jesus to be their King: they will soon be dispersed, in punishment for their revolt against the Son of David; but Jesus is King, and will be so for ever.”

“Thus were literally verified the words spoken by the Archangel to Mary, when he announced to her the glories of the Child that was to be born of her: ‘The Lord God shall give unto Him the throne of David, His father; and He shall reign in the house of Jacob for ever.’ [St. Luke i. 32]. Jesus begins His reign upon the earth this very day; and though the first Israel is soon to disclaim His rule, a new Israel, formed from the faithful few of the old, shall rise up in every nation of the earth, and become the kingdom of Christ, a kingdom such as no mere earthly monarch ever coveted in his wildest fancies of ambition.”

Yet the cry of welcome is already hollow. Gueranger writes that “an enthusiastic reception is given to Him in the morning, He is proclaimed by the people as their King; but when the evening of that day comes on, there is not one of all those thousands to offer Him food or lodging.”

The Man whom the people acclaim with shouts of joy and praise is soon to be the Man whom they condemn with shouts of anger and hatred. Their exaltation soon turns to rejection and scorn, their welcoming of Christ in such a kingly manner is to be dashed by their rejection of Him as if a common criminal. This is reflected in the liturgy of the day, as the chants and sacred texts which occur during the liturgical procession of palms are swiftly replaced by the solemn and sombre tones of those in the Mass, including of course, St. Matthew’s Passion.

Yet whilst His enemies sought to thwart Him, to kill Him and thus scatter His followers, in their hatred of Truth they became servants of the father of lies. The father of lies cannot lead to victory nor truth. Thus, the death they inflicted upon Christ became in fact the path to life, as St. Paul notes in his Epistle: “Brethren: Have this in mind in you which was also in Christ Jesus, Who, though He was by nature God, did not consider being equal to God a thing to be clung to, but emptied Himself, taking the nature of a slave and being made like unto men.”

St. Paul reminds us of how Christ desired to humble Himself and die for man, so that man might return to God through Him: “And appearing in the form of man, He humbled Himself, becoming obedient to death, even to death on a cross. Therefore God also has exalted Him and has bestowed upon Him the Name that is above every name, so that at the Name of Jesus every knee should bend of those in heaven, on earth and under the earth and every tongue should confess that the Lord Jesus Christ is in the glory of God the Father.”

The crowds in Jerusalem hailed Christ as king, but already by evening their devotion had grown weak. By Friday, their devotion will have turned to hatred and lust for blood. The palms they lay down before Him today, offering a royal welcome, are turned to spitting and insults as they jeer Him along the way to the cross. But they, and many in the world still today, are unable to understand the truth of the Divine Kingship. The Jews offered palms, hoping for some earthly wonders, liberation from physical oppression, and when they did not find these things, they made Christ fall on His knees to them with their beatings, instead of kneeling before the King of Kings. The world today does likewise, seeking only comforts, luxury and freedom from all hardships: when they find not these things, then their anger towards God grows and they soon deny Him altogether.

The ignorance, their hatred and their sin, all of which moved them to clamour “crucify Him,” were meant to be their ultimate rejection of the one Whom they had rejected as King. Yet the cross became the throne of glory, whereon Christ performed a victory more glorious than any around Him could have dreamt of.

The cross, that terrible instrument of the passion, became the noble instrument of salvation, and those faithful souls who follow Christ are thus more ready to bend their knee towards the crucified Lord, than were the Jews when welcoming Him with palms into the city.

The worldly concept of glory cannot comprehend the mystery of the cross, and yet St. Paul tells us that it is precisely through the cross that glory comes. “He humbled Himself, becoming obedient to death, even to death on a cross. Therefore God also has exalted Him.”

This week of sorrows is one where we are called to enter deep into the mystery of the Redemption, contemplating on the passion and death of our Saviour. Still today, the cross is seen as something offensive, something which is to be removed from the public sphere, and is used as an insult against those who love the crucified Lord. So as the world continues its constant rejection of Christ on the cross, let the liturgy of this week serve to highlight the glory of the cross, and the beauty of Heaven which is only found through walking in the footsteps of Christ, along the royal road of the cross.