Fourth Sunday after Easter - St. Joseph leads to Mary and the Christ child. 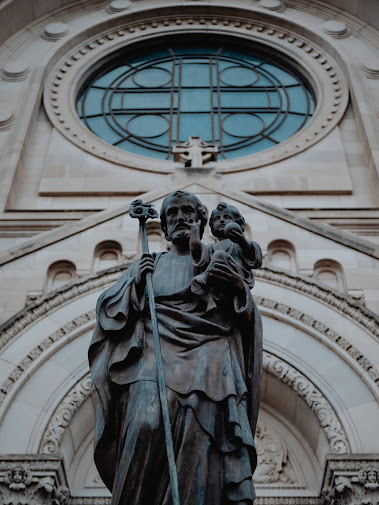 (Photo by Sergei Sushchik on Unsplash)

The month of May, which is dedicated to Our Lady, began with the feast of St. Joseph the worker, a fitting way to commence the month devoted to the Mother of God, since none was more devoted to her than her gentle spouse. Traditionally the Church celebrated a feast of St. Joseph during Easter time, dedicating the third Sunday after Easter to be under his patronage. Whilst today is the fourth such Sunday after Easter, the below reflection drawn entirely from Dom Gueranger’s commentary on the traditional commemoration of the foster-father of Our Lord, is still particularly poignant and profound.

“The Easter mysteries are superseded today by a special subject, which is offered for our consideration. The holy Church invites us to spend this Sunday in honouring the Spouse of Mary, the Foster-Father of the Son of God. And yet, as we offered him the yearly tribute of our devotion on the 19th of March, it is not, properly speaking, his Feast that we are to celebrate today. It is a solemn expression of gratitude offered to Joseph, the Protector of the Faithful, the refuge and support of all that invoke him with confidence. The innumerable favours he has bestowed upon the world entitle him to this additional homage. With a view to her children’s interests, the Church would, on this day, excite their confidence in this powerful and ever ready helper.

Devotion to St. Joseph was reserved for these latter times. Though based on the Gospel, it was not to be developed in the early ages of the Church. It is not that the Faithful were, in any way, checked from showing honour to him who had been called to take so important a part in the mystery of the Incarnation; but Divine Providence had its hidden reasons for retarding the Liturgical homage to be paid, each year, to the Spouse of Mary.

The goodness of God and our Redeemer’s fidelity to his promises have ever kept pace with the necessities of the world; so that, in every age, appropriate and special aid has been given to the world for its maintaining the supernatural life. An uninterrupted succession of seasonable grace has been the result of this merciful dispensation, and each generation has had given to it a special motive for confidence in its Redeemer.

Now, devotion to Mary could never go on increasing as it has done, without bringing with it a fervent devotion to St. Joseph. We cannot separate Mary and Joseph, were it only for their having such a close connection with the mystery of the Incarnation: Mary, as being the Mother of the Son of God; and Joseph, as being guardian of the Virgin’s spotless honour, and Foster-Father of the Divine Babe. A special veneration for St. Joseph was the result of increased devotion to Mary. Nor is this reverence for Mary’s Spouse to be considered only as a just homage paid to his admirable prerogatives: it is, moreover, a fresh and exhaustless source of help to the world, for Joseph has been made our Protector by the Son of God himself.

Hearken to the inspired words of the Church’s Liturgy: ‘Thou, O Joseph! art the delight of the Blessed, the sure hope of our life, and the pillar of the world!’ (Hymn for the Lauds of the Feast of the Patronage of St. Joseph)  Extraordinary as is this power, need we be surprised at its being given to a man like Joseph, whose connections with the Son of God on earth were so far above those of all other men? Jesus deigned to be subject to Joseph here below; now that He is in heaven, He would glorify the creature, to whom He consigned the guardianship of His own childhood and His Mother’s honour. He has given him a power, which is above our calculations.

Hence it is, that the Church invites us, on this day, to have recourse, with unreserved confidence, to this all-powerful Protector. The world we live in is filled with miseries which would make stronger hearts than ours quake with fear: but, let us invoke St. Joseph with faith, and we shall be protected. In all our necessities, whether of soul or body — in all the trials and anxieties we may have to go through — let us have recourse to St. Joseph, and we shall not be disappointed. The king of Egypt said to his people, when they were suffering from famine: go to Joseph! (Genesis 41:55) the King of Heaven says the same to us: the faithful guardian of Mary has greater influence with God, than Jacob’s son had with Pharaoh.

As usual, God revealed this new spiritual aid to a privileged soul, that she might be the instrument of its propagation. It was thus that were instituted several Feasts, such as those of Corpus Christi, and of the Sacred Heart of Jesus. In the 16th century, St. Teresa, (whose writings were to have a world-wide circulation,) was instructed by heaven as to the efficacy of devotion to St. Joseph: she has spoken of it in the Life, (written by herself,) of Teresa of Jesus. When we remember, that it was by the Carmelite Order, (brought into the Western Church, in the 13th century,) that this devotion was established among us, we cannot be surprised that God should have chosen St. Teresa, who was the Reformer of that Order, to propagate the same devotion in this part of the world.

The holy solitaries of Mount Carmel — devoted as they had been, for so many centuries, to the love of Mary — were not slow in feeling the connection that exists between the honour paid to the Mother of God and that which is due to her virginal Spouse. The more we understand St. Joseph’s office, the clearer will be our knowledge of the divine mystery of the Incarnation. As when the Son of God assumed our human nature, he would have a Mother; so also, would he give to this Mother a protector. Jesus, Mary and Joseph — these are the three whom the ineffable mystery is continually bringing before our minds.

The words of St. Teresa are as follows: “I took for my patron and lord the glorious St. Joseph, and recommended myself earnestly to him. I saw clearly ... that he rendered me greater services than I knew how to ask for. I cannot call to mind that I have ever asked him at any time for anything which he has not granted; and I am filled with amazement when I consider the great favours which God hath given me through this blessed Saint; the dangers from which he hath delivered me, both of body and soul. To other Saints, our Lord seems to have given grace to succour men in some special necessity; but to this glorious Saint, I know by experience, to help us in all: and our Lord would have us understand that, as he was himself subject to him upon earth — for St. Joseph having the title of father, and being his guardian, could command him — so now in heaven he performs all his petitions. I have asked others to recommend themselves to St. Joseph, and they too know this by experience; and there are many who are now of late devout to him, having had experience of this truth.” (The Life of St Teresa)

It is now more than a century ago, that the Carmelites sought and obtained the approbation of the Holy See for an Office in honour of the Patronage of St. Joseph. A great number of Dioceses obtained permission to use it. A Sunday was selected for the celebration of this new Feast, in order that the Faithful might be, in a way, compelled to keep it; for the Feast of St. Joseph in March is not a day of obligation for the universal Church, and, as it always falls during Lent, it cannot be kept on a Sunday, since the Sundays of Lent exclude a Feast of that rite. That the new Feast might not be attended with the same risk of being unnoticed, it was put upon a Sunday, — the third Sunday after Easter, that thus the consolations of such a solemnity might be blended with the Paschal joys.

The new Feast went on gradually spreading from one diocese to another; till at last, there was unexpectedly issued an Apostolic Decree, dated September the 10th, 1847, which ordered it to be kept throughout Christendom. The Church was on the eve of severe trials; and her glorious Pontiff, Pius IX, by a sacred instinct, was prompted to draw down on the Flock entrusted to him the powerful protection of St. Joseph, who, assuredly, has never had greater miseries and dangers to avert from the world, than those which threaten the present age.

Let us then, henceforth, have confidence in the Patronage of St. Joseph. He is the Father of the Faithful, and it is God’s will, that he, more than any other Saint, should have power to apply to us the blessings of the mystery of the Incarnation — the great mystery whereof he, after Mary, was the chief earthly minister.”