Sunday after Ascension - those who persecute you will consider their actions a good service. 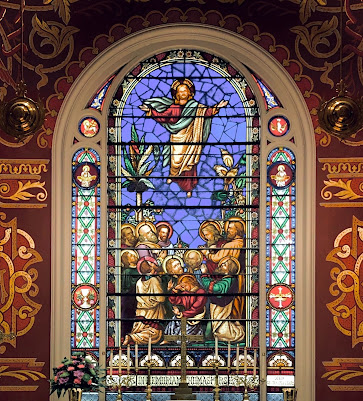 “These things have I spoken to you, that you may not be scandalized. They will put you out of the synagogues: yea, the hour cometh, that whosoever killeth you, will think that he doth a service to God. And these things will they do to you; because they have not known the Father, nor me. But these things I have told you, that when the hour shall come, you may remember that I told you of them.”

The time between Christ’s ascension into Heaven and the coming of the Holy Spirit at Pentecost, is one of expectancy. The paschal candle has been dimmed and Christ has departed this world in order to send the Holy Spirit to guide the Church. Having spent Lent dwelling on the passion of Christ, and Easter dwelling on the glorious triumph of His resurrection, the days before Pentecost are an apt way to prepare for the advent of the Holy Spirit, by revisiting the gifts and fruits which He bestows.

The seven gifts are of course wisdom, understanding, counsel, fortitude, knowledge, piety and fear of the Lord. As Dom Gueranger notes, in this Gospel today, Christ is describing the effect which the Holy Spirit will have upon our souls. “He told them that the Paraclete would give testimony of him, that is, would instruct them upon his Divinity, and teach them to be faithful to him, even so as to lay down their lives for him. A few moments before his Ascension, Jesus again spoke to them concerning the Paraclete, and called him the Power from on high. (Luke 24:49) Severe trials were awaiting these Apostles; they would have to resist unto blood. (Hebrews 12:4) Who would be their support? For, of themselves, they were but weak men. The Holy Ghost, who was to abide with them. By him they would conquer, and the Gospel would be preached to all nations.”

The Church is sustained just as the apostles were, and Her members are likewise given the graces necessary to overcome the trials which they face in daily life. Indeed, today’s Gospel text from St. John pertains especially to the trials which Catholics must be prepared to face, as Christ Himself warns: “yea, the hour cometh, that whosoever killeth you, will think that he doth a service to God.” In these words, He describes the persecution of the Church which will come at the hands of godless men, men who “have not known the Father, nor me.” This concept of persecution should not take anyone by surprise. After all, the early centuries of the Church were marked by the blood of Her martyrs, and throughout history there have been lengthy periods in which Her members have endured persecution and death for the Faith.

This reality exists still today in countries such as China and North Korea, far removed from the Western mindset, which cannot conceive of hardships relating to the Faith. Many in the Church subscribe to a mindset of denial, seemingly incapable of contemplating the thought that they might have to suffer in some manner for the Catholic faith. ‘Is not that something confined to history, or far off lands,’ they muse.

But in reality, persecution should never be a surprise. Elsewhere in the Gospels Christ warns of this very fact: “If they have persecuted me, they will also persecute you.” (John 15:20) As society moves further away from God and the practice of virtue, widespread antagonism towards the Catholic faith can swiftly change to outright discrimination or persecution. Indeed, Christ states that some will kill Catholics, and even believe that they are doing a just action. That is to say, that the number of faithful Catholics might be so small, and they are so outnumbered by those who subscribe to the values of the world, that the children of the world see Catholics as the evildoers.

This image, described by Christ, is a true foreshadowing of the times when anti-Christs are spread throughout the world, when truth is turned on its head, when evil is considered a human right, and virtue considered an injustice, or persecution. In times when this occurs, Catholics would be foolish to not expect some persecution from others.

But pausing for a moment on this image described above, one easily notes the similarities to the world today. Homosexuality, same-sex ‘marriage,’ gender ideology and abortion, all sins which cry out to Heaven for vengeance, are considered a human right. Children in primary schools are being robbed of their innocence through immoral education, and even urged to ‘transition’ to the opposite sex. Anyone who seeks to oppose this demonic attack is vilified as a hate filled radical, a denier of human rights, and even a Nazi. Is this not a time where truth is turned on its head?

Even more than this, we live in an era when the Pope, he who should be the rock of truth, no longer can be trusted to teach doctrine and spread the faith. Instead, he tells Catholics not to seek to convert others, promotes and host abortion champions at the Vatican, and spreads confusion and heresy instead of truth and doctrine. Is not this once again, a sign of a time when truth is turned on its head?

When even the Vatican and the Pope avail of pro-abortion terminology, promote abortion champions, same-sex civil unions, and communion for the divorced and ‘re-marrried’, what leeway will the world give to faithful Catholics who refuse to follow the Pope in these errors, and choose instead to remain faithful?

When those called to defend the truth, abandon it and align themselves with the servants of the world, can one expect their support when one is ostracised and persecuted for refusing to deny the faith in a similar manner?

Christ warned that “He that is not with me, is against me: and he that gathereth not with me, scattereth.” (Matt 12:30) It would seem that those who choose to remain true to the Catholic faith, have indeed already been abandoned by false shepherds, who choose instead to scatter and go against God.

Is this not a time, therefore, in which truth is turned on its head? Is this not a time in which one can and should expect to face persecution for the truth? The world today is indeed a place where, just as Christ described, adherents to the Truth will be persecuted, killed, and those who “killeth you, will think that he doth a service to God.”

Yes indeed, this time is a time of persecution, in whatever form that eventuality takes. However, Christ is not some kind of doomsday prophet, who merely warns of evil but gives no reassurance. His very departure from this earth at the Ascension, means that the Holy Spirit is sent to earth nourish and sustain His followers. The third Person of the Holy Trinity brings His gifts and fruits, so that faithful souls are not without the Divine life and nourishment. Dom Gueranger notes this also, writing that the advent of the Holy Spirit is for one purpose only, namely, to guide the Church through the constant battle against the demonic forces. “Now, this Spirit of the Father and Son is about to descend upon us; and what is the object of his visit, but that of arming us for the combat, and strengthening us against the attacks of our enemies?”

Christ has won the victory of the cross, defeating the forces of sin and evil, so that no matter the infernal raging of the devils, they cannot secure a lasting victory. Indeed, at the close of the chapter of St. John’s gospel, from which today’s Gospel is drawn, the Redeemer reminds us of this fact: “These things I have spoken to you, that in me you may have peace. In the world you shall have distress: but have confidence, I have overcome the world.” (John 16:33)

“Amen, amen I say to you, that you shall lament and weep, but the world shall rejoice; and you shall be made sorrowful, but your sorrow shall be turned into joy.” (John 16:20)

This time in which truth is so widely rejected, Truth Incarnate blasphemed and scorned, and the faith spurned by those who should proclaim it, is thus not a time for fear. Fear is for those who are unaware of the outcome, who rely only upon themselves and their strengths. Yet the Catholic Church knows that the victory has been won by Her Bride, Christ Himself, and Her members do not rely on their feeble strengths, but upon the grace of God, the gifts and fruits of the Holy Ghost, and the redemptive passion and death of Christ.

Thus in the preparation for Pentecost, the Church provides a time to contemplate what the advent of the Holy Spirit means. His graces are given so that faithful souls might engage in the spiritual battle and remain resolute in the persecution which they will face. The day of Pentecost itself is not merely a commemorative feast, but a spiritual reality. Let this Pentecost thus be one in which faithful souls pray confidently for the graces they need to endure the inevitable persecutions in this godless age.

As Dom Gueranger writes: “If we be endued with the Power from on high, we shall have nothing to fear. Let us, therefore, ardently desire to receive him; let us prepare him a worthy reception; let us use every endeavor to make him abide with us; and we shall gain the victory, as did the Apostles.”