Fifth Sunday after Pentecost - following the Sacred Heart in charity 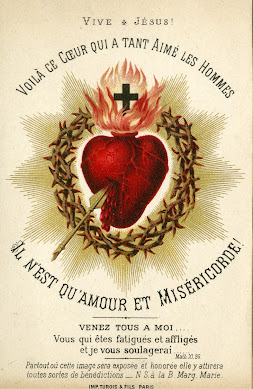 “Because the eyes of the Lord are upon the just, and his ears unto their prayers: but the countenance of the Lord upon them that do evil things. And who is he that can hurt you, if you be zealous of good? But if also you suffer any thing for justice’ sake, blessed are ye. And be not afraid of their fear, and be not troubled. But sanctify the Lord Christ in your hearts.”

As the month of the Sacred Heart draws to a close, these words from today’s Epistle ring out ever more true and apt for this time. The saints and commentators write about how the Sacred Heart is on fire with love for man, a love that leads ultimately to the cross. Dwelling upon this love of the God-man for mankind, St. Peter writes to encourage those in the Church, urging faithful souls to have confidence in the fathomless love of God.

Indeed, his words start by first calling his listeners to an imitation of Christ, as evidenced by a daily living out of the virtue of charity. “And in fine, be ye all of one mind, having compassion one of another, being lovers of the brotherhood, merciful, modest, humble.” Such words are not to be understood in the modern, corrupted meaning, whereby mercy is equated with ready acceptance of all and sundry, including sin. Rather, they are to be understood by charity itself, which is that virtue whereby one loves others for the sake of God. Moved by charity, faithful souls are thus able to practice true mercy, modesty and humility, since they seek the love of God in all things. This means, therefore, that any manifestation of mercy, modesty or humility which does not ultimately tend towards love of God, and respect for His will, is not motivated by charity, nor is it a true good action.

Hence instead of an irreligious concept of fraternity, St. Peter urges a truly Catholic union of souls, where the binding theme is love of God which is consequently manifested in the love for one’s fellow men. Dom Gueranger writes of this true, charity driven brotherhood as described by St. Peter, when commentating on the Epistle: “But let us also understand the importance and the necessity of mutual union for all Christians: there must be, among them, that love of the brotherhood, which is so frequently, and so strongly, recommended by the Apostles, the co-operators of the spirit in the building up of the Church. The keeping aloof from schism and heresy, of whose terrible consequences we were told in last Sunday’s Gospel;—the repression of hatred and jealousy,—no, these are not enough for the making us become useful members of the Church of Christ.”

It is with this in mind, that the prince of the Apostles calls for his readers to give each other good works and blessings, instead of returning evil for evil. “Not rendering evil for evil, nor railing for railing, but contrariwise, blessing: for unto this are you called, that you may inherit a blessing.” Here is true charity in practice, whereby souls deal only in blessings, and are repaid in blessings.

What is it that enables souls to be able to do so? A life lived in imitation of Christ, in imitation of the Sacred Heart, which burns constantly for love of man. Such a life of charity becomes much easier when faced with the reality of the Sacred Heart, the heart which was pierced out of love, for this reality instantly demands that men either rise to the challenge of the life of virtue, or reject it. There is no middle ground in this decision; no possibility of ‘treading water’ and remaining stationary in the spiritual life - one either grows or shrinks in virtue.

The moral and spiritual writers of recent decades have advocated a policy of avoiding the mention of sin, or firm doctrine, or even of solid teaching on the truth about the virtues. This leads unavoidably to a lack of understanding of the faith and an inability to realise the love which consumes the Sacred Heart.

Yet the Apostles, principally St. Peter, do not shy away from firm teachings, aware that only an ardent zeal in the faith is going to enable souls to continue in their pursuit and imitation of the Sacred Heart. St. Peter’s words are not like those heard in more recent days, but challenging, constantly encouraging and teaching. “For he that will love life, and see good days, let him refrain his tongue from evil, and his lips that they speak no guile. Let him decline from evil, and do good: let him seek after peace and pursue it.”

This challenge, which is not merely from one man but principally from the Sacred Heart, is not easy, but neither is it supposed to be. The Apostle does not promise that such a life would be free of hardship; on the contrary he warns that suffering will be expected. Indeed, hardship is to be expected, but so also is the assistance of God: “And who is he that can hurt you, if you be zealous of good? But if also you suffer any thing for justice’ sake, blessed are ye. And be not afraid of their fear, and be not troubled.”

The month of June is an apt time to make use of the month’s dedication and approach the Sacred Heart, using the principles laid out by St. Peter. They are firm, yet not overly severe; doctrinal, but not blind to the hardships faced in life. Ultimately, it boils down to developing the virtue of charity, for just as it is such pure as selfless love which fills the Sacred Heart, moved always by love of God, so it is love of God which must orient man’s actions on earth and so imitate the path established by the Sacred Heart.

As Dom Gueranger notes: “Union of true charity, concord and peace, which must, at every cost, be kept up as the condition for their being happy both now and forever,—such is the substance of the instructions addressed by Simon, now Peter, to those other chosen stones, which rest upon him, and constitute that august Temple to be presented by the Son of Man to the glory of the Most High.”