The love of the Sacred Heart 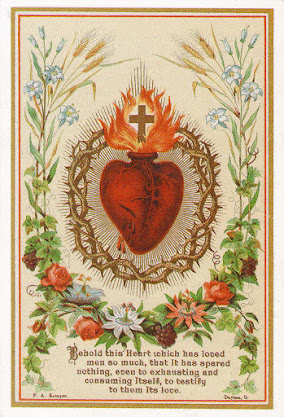 Regular readers will have noted the absence of any post on this blog last Sunday. Many apologies for this unannounced break; normal service will now resume, with this below section from Dom Gueranger's writing on the feast of the Sacred Heart, since we are currently in the month of the Sacred Heart.

At the period of Jesus’ coming upon this earth, man had forgotten how to love, for he had forgotten what true beauty was. His heart of flesh seemed to him as a sort of excuse for his false love of false goods: his heart was but an outlet, whereby his soul could stray from heavenly things to the husks of earth, there to waste his power and his substance. (Luke 15:13) To this material world, which the soul of man was intended to make subserve its Maker’s glory,—to this world, which, by a sad perversion, kept man’s soul a slave to his senses and passions,—the Holy Ghost sent a marvellous power, which, like a resistless lever, would replace the world in its right position:—it was the sacred Heart of Jesus; a Heart of flesh, like that of other human beings, from whose created throbbings there would ascend to the eternal Father an expression of love, which would be an homage infinitely pleasing to the infinite Majesty, because there was in that love of that human Heart the dignity of its union with the Word.

It is a harp of sweetest melody, that is ever vibrating under the touch of the Spirit of Love; it gathers up into its own music the music of all creation, whose imperfections it corrects, and supplies its deficiencies, and tunes all discordant voices into unity, and so offers to the glorious Trinity a hymn of perfect praise. The Trinity finds its delight in this Heart. It is the one only organum, as St. Gertrude calls it (Legatus divinæ pietatis; lib. ii. c. 23; lib. iii. c. 25.), the one only instrument which finds acceptance with the Most High. Through it must pass all the inflamed praises of the burning Seraphim, just as must do the humble homage paid to its God by inanimate creation. By it alone are to come upon this world the favors of heaven. It is the mystic ladder between man and God, the channel of all graces, the way whereby man ascends to God and God descends to man.

The Holy Ghost, whose masterpiece it is, has made it a living image of himself; for although, in the ineffable relations of the divine Persons, he is not the source of love, he is its substantial expression, or, in theological language, the term; it is he who inclines the holy Trinity to those works outside itself, which first produce creatures, and then, having given them being (and to some, life), he (the Holy Spirit) pours out upon them all the effusion of their Creator’s love for them. And so is it with the love which the Man-God has for God and Man,—its direct and, so to say, material expression is the throbbing it produces upon his sacred Heart; and again, it is by that Heart that, like the Water and Blood which came from his wounded Side, he pours out upon the world a stream of redemption and grace, which is to be followed by the still richer one of glory.

One of the soldiers, as the Gospel tells us, opened Jesus’ Side with a spear, and, immediately, there came out blood and water. (John 19:34) We must keep before us this text and the fact it relates, for they give us the true meaning of the Feast we are celebrating. The importance of the event here related is strongly intimated, by the earnest and solemn way in which St. John follows up his narration. After the words just quoted, he adds: And he that saw it, hath given testimony of it, and his testimony is true. And he knoweth that he saith true, that ye also may believe; for these things were done, that the Scripture might be fulfilled. (John 19:35-36) Here the Gospel refers us to the testimony of the Prophet Zacharias, who, after predicting the Spirit of grace being poured out upon the house of David and the inhabitants of Jerusalem, (Zacharias 12:10) says: They shall look upon Him whom they pierced. (Zacharias as quoted by St John 19:37)

And, when they look upon his side thus pierced what will they see there, but that great truth which is the summary of all Scripture—of all history:—God so loved the world, as to give it his Only Begotten Son; that whosoever believeth in him, may not perish, but may have eternal life. (John 3:16) This grant truth was, during the ages of expectation, veiled under types and figures; it could be deciphered by but few, and, even then, only obscurely; but it was made known with all possible clearness on that eventful day when, on Jordan’s banks, (Luke 3:21-22) the whole sacred Trinity manifested who was the Elect, the Chosen One, of the Father,—the Son in whom he was so well pleased. (Isaias 42:1) Yes, it was Jesus of Nazareth, the Son of Mary: but there was another revelation, of deepest interest to us, which had still to be made: it was,—how, and in what way, would the eternal life brought by this Jesus into the world, pass from him into each one of us?

This second revelation was made to us, when the soldier’s spear opened the divine source, and there flowed from it that Water and Blood, which, as the Scripture tells us, completed the testimony of the Blessed Three. There are three, says St. John, who give testimony in heaven: the Father, the Word, and the Holy Ghost: and these Three are One. And there are three that give testimony on earth: the Spirit, and the Water, and the Blood: and these three are one, that is, they are one because they concur in giving the one same testimony. And this, continues St. John, is the testimony:—that God hath given to us eternal life, and that this life is in his Son. (John 5:7-8, 11) These words contain a very profound mystery; but we have their explanation in today’s Feast, which shows us how it is through the Heart of the Man-God that the divine work is achieved, and how, through that same Heart, the plan, which was conceived, from all eternity, by the Wisdom of the Father, has been realized.

To communicate his own happiness to creatures, by making them, through the Holy Ghost, partakers of his own divine nature, (1 Peter 1:4) and members of his beloved Son,—this was the merciful design of the Father; and all the works of the Trinity, outside itself, tend to the accomplishment of that same. When the fullness of time had come, there appeared upon our earth He that came by water and blood, Jesus Christ,—not by water only, but by water and blood. The Spirit, who, together with the Father and the Son has already, on the banks of Jordan, given his testimony, gives it here again, for St. John continues: And it is the Spirit which testifieth, that Christ is the truth; and that he spoke the truth (1 john 5:6) when he said of himself, that he is Life. (John 5:26) Yes, the Spirit, as the Gospel teaches us, (John 7:37-39) comes forth with the water from the fountains of the Savior, (Isaias 12:3) and makes us worthy of the precious Blood, which flows together with the water. Then does mankind, thus born again of water and the Holy Ghost, become entitled to enter into the kingdom of God; (John 3:5) and the Church, thus made ready for her Spouse in those same waters of Baptism, is united to the Incarnate Word in the Blood of the sacred Mysteries. We, being members of that holy Church, have had the same union with Christ; we are bone of his bones, and flesh of his flesh; (Genesis 2:23, Ephesians 5:30) we have received the power to be made adopted Sons of God, (John 1:12) and sharers, for all eternity, of the divine life, which He, the Son by nature, has in the bosom of the Father.