Eighth Sunday after Pentecost - 'Make an accounting of your stewardship' 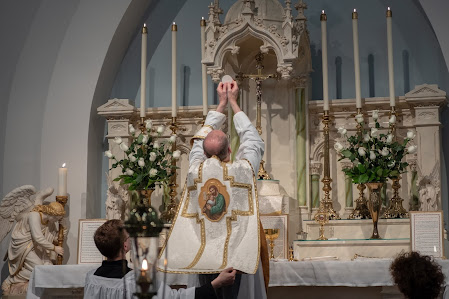 The Catholic world has been torn apart in the last number of days, with one of the most severe attacks on Tradition which has been made in recent years. The innovators seek to do away with all that is not conformed to their ideals, and such ideals are by no means conformed to the law of God. It is perhaps fortuitous that the Gospel for today bears upon this subject, for St. Luke’s Gospel contains the warning from Christ: “Make an accounting of your stewardship, for you can be steward no longer.” Such a time comes to all on earth – that time when death is nigh, and the pleasures and hardships of this life fade away into nothingness, when faced with the prospect of eternity.

In this moment, each soul, faithful or not, will be called before the judgement of God and asked to make an account of his life. Woe to each one who has not followed the law of God; woe to each shepherd who has led his flock away from God. Woe to those also who do not withstand the false teaching of such shepherds. In modern society, morals and values are so depleted, that one can easily lose the horror which should naturally occur when faced with violations of the law of God, and when faced with attacks upon the faith. Yet one useful way to re-learn the horror which should spring naturally in such times – such as when the Pope might attack the faith and Mass of ages – is by dwelling on the moment of particular judgement which occurs after death.

For that moment is one of reckoning, in which excuses and reasons are of no use anymore, and one’s life is measured in terms of a simple question: ‘Did you follow Me even unto the cross?’ This question is involved, for it bears upon every aspect of life, every day, every moment. One’s life either tends towards God, or it moves away from Him: there is no room for remaining stagnant in the spiritual life. Consequently, each action can either serve as a stepping stone to align a soul closer with God or to move the soul further away.

It is the responsibility of each person to form his conscience well, to seek to know the Truth and to draw closer to Him, so that one might be able to use the precious moments of earthly life to reach the goal that is Heaven. The ‘race’ of which St. Paul speaks is not to be underestimated, for it is one in which every man is called to follow God and to work towards his salvation. The importance of seeking one’s own salvation must remain paramount in every soul. Hence it is that one’s actions must be in accord with that goal.

Those in positions of authority have the great burden not only of pursuing their salvation, but also of guiding those of their flock. For these shepherds, the burdens faced but also necessary graces offered, are numerous. There have indeed been many holy, canonised priests, bishops, popes and religious. But there have also been many evil clerics, more interested in power and prestige than the matter of saving their soul, let alone that of the flock entrusted to them. Such false shepherds can cause untold damage, as the have the appearance of sheep but are in reality wolves, who hunger for everything that they ought not.

Such false shepherds, instead of promoting the faith, seek only to undermine it, to weaken and corrupt it. They do not consider the moment of their judgement, at which point they will have to answer how they heeded the call to the cross and safeguarded the faith of their flock. Each attack upon the Church is an attack upon God, but when the attack comes from within, by one of His anointed ministers, the attack is all the more egregious.

When these wolves turn their back upon the faith and seek only to promote their own novel teaching, they reject the duty which they accepted on the day of ordination. They take sides with the devil instead of their Captain, the Eternal High Priest, and scorn the faithful in their charge. Their punishment will undoubtedly come at the time of judgement.

St. Alphonsus de Ligouri has this to say about that moment: “Beloved Christians, of all the goods of nature, of fortune, and of grace, which we have received from God, we are not the masters, neither can we dispose of them as we please; we are but the administrators of them; and therefore we should employ them according to the will of God, who is our Lord. Hence, at the hour of death, we must render a strict account of them to Jesus Christ, our Judge. ‘For we must all be manifested before the judgment seat of Christ, that every one may receive the proper things of the body as he hath done, whether it be good or evil.’ (2 Cor. v. 10.) This is the precise meaning of that ‘give an account of thy stewardship,’ in the gospel of this day. ‘You are not,’ says St. Bonaventure, in his comment on these words, ‘a master, but a steward over the things committed to you; and therefore you are to render an account of them’.”

Each soul has the duty to follow Christ in such a manner that he might answer in the affirmative when he is asked if he heeded the invitation to follow Christ. Yet, following Christ does not simply mean a quiet acceptance of all the sufferings of this life. One can indeed do so for injustices which are made against oneself, but any injustice against the faith, against the Church, against God, must be resisted firmly. The modernists have for so long proposed a form of ‘white heresy,’ whereby they preach love and acceptance, instead of adherence to doctrine. They pretend that following God means that one must be accepting of all, when in fact faithful adherence to the Gospel demands rejection of sin, wherever and whenever it is found.

In the face of the constant, yet now severe, attacks on the faith by the fake shepherds, every soul is called upon to follow Christ so as to be able to give a worthy account of his actions at the particular judgement. Such a following of Christ demands adherence to the faith which He imparted to His Church, and if many of His ministers have abandoned this faith, it falls to the faithful souls to preserve it, to resist the attacks of the devil made through unfaithful clerics, and to stay true to God.