Seventh Sunday after Pentecost - The danger of false shepherds 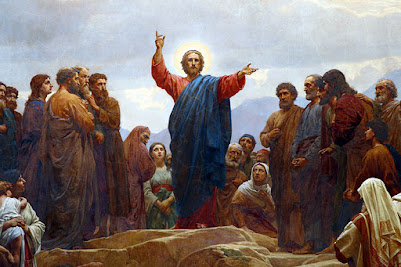 “Beware of false prophets, who come to you in the clothing of sheep, but inwardly they are ravening wolves.” Such is the opening line of today’s Gospel, drawn from that of St. Matthew. In many ways, the text needs little expansion, for its meaning is clear: there are many in the world who seek to tempt souls away from the true faith, under the guise of being faithful shepherds themselves. Indeed, their sheep-like clothing is often all too convincing, and their error so subtle so as not to cause alarm.

Thus it is perhaps this last aspect which deserves more attention, for while many false prophets are easy to spot, those who cause the most damage are those who align themselves closest to the faith, yet deviate on even just one issue.

Pope Leo XIII recalls this point in his encyclical Satis Cognitum: “Hence she [the Church] regarded as rebels and expelled from the ranks of her children all who held beliefs on any point of doctrine different from her own. The Arians, the Montanists, the Novatians, the Quartodecimans, the Eutychians, did not certainly reject all Catholic doctrine: they abandoned only a certain portion of it. Still who does not know that they were declared heretics and banished from the bosom of the Church? In like manner were condemned all authors of heretical tenets who followed them in subsequent ages. ‘There can be nothing more dangerous than those heretics who admit nearly the whole cycle of doctrine, and yet by one word, as with a drop of poison, infect the real and simple faith taught by our Lord and handed down by Apostolic tradition’ (Auctor Tract. de Fide Orthodoxa contra Arianos).”

In these current days of laxity, where modernism instead of traditional Catholicism, is more often the policy of priests and bishops, Pope Leo’s words must be read carefully in conjunction with Christ’s warning in the Gospel.

“Beware of false prophets,” for they come in all guises, even in clerical ones. The devil rejoices for every soul he manages to lead astray through the lax, false, or ‘dodgy’ teaching of such false shepherds. How many bishops and priests across the world purport to lead their flock, yet resolutely avoid speaking out on issues such as abortion, LGBT ideology, the crisis of faith, corruption of the clergy, promotion of homosexuality and abortion by the Vatican, the immense scandal given by Pope Francis in his regular statements and actions.

Furthermore, how many are there, who are not content with merely silently avoiding these topics, but actively speak in favour of them. Stories abound of priests who inform their congregation that moral issues are a thing of the past, that the Church is an “accompanying Church” rather than a teaching Church, that God does not judge you, that Holy Communion should not be withheld even if you are in serious sin…. The list of examples continues almost endlessly, and comes form every level within the Church.

Until such “false prophets” are exposed and denounced, then lies and a misinterpretation of the faith will continue to run rampant within the Catholic Church, spread by those who are called to defend the faith.

But some might comment that this accusation is too harsh, and that such clergy are well-meaning and merely confused on particular, minor issues. The Gospel contains the answer to such questions however: “A good tree cannot bring forth evil fruit, neither can an evil tree bring forth good fruit.” If such clergy continue to be supported or promoted, they will continue to spread evil fruit. Christ does not entrust His Church with the mission of loosely guarding the Church, and simply watching as its doctrine is relentlessly undermined. No! He gave commands for His disciples to go forth and convert all nations. Even out of simple regard for one’s own soul, such dangerous shepherds must be avoided, so that one does not put himself in danger of being led astray.

Christ’s call is full of love, yet it is the love of the cross, which requires similar complete self-oblation in return. If a soul seeks to return a false form of love to Him, then he does not respond to the call issue by the crucified Redeemer.

It is based on these principles that St. Alphonsus de Ligouri writes on this Sunday concerning the care which must be taken as to the education of children in the faith. Though his words are directed more to the care of children, they can also be understood as pertaining to all souls desirous of learning and pursuing the fullness of the faith. The saint writes about the importance of cultivating habits of virtue so as to form the bedrock of the spiritual life, and equip one for the trials of life, which include the attacks made by false prophets.

His principles and admonitions must be applied to souls of every age. The saint teaches that the chief care of parents must be to nurture the faith in their children, and such a responsibility applies to all, whether with children or without. To this end, care must be taken to safeguard oneself against the attacks of the false prophets, of which the Gospel warns. Armed with a ready and firm knowledge of the faith, along with a healthy spiritual life, a soul is more able to see through the wiles and cunning of wolves in sheep’s clothing, those bishops and priests who mislead countless souls.

Such faithful souls must seek out the faithful shepherds, those who can bring forth good fruit instead of evil, and whose primary concern is to lead souls to heaven in the fullness of the faith.

So widespread is the effect of modernism that it can indeed be hard to find shepherds who do not turn out to be wolves in disguise. But despite this, one must not settle for mediocrity in the matter of one’s path to salvation. For if a soul attaches himself to a false prophet, thinking that the few points of doctrine in which the priest errs are not going to be an issue, then such a soul give due priority to the safety of his path to salvation. Such false prophets, if they are not sound, cannot be a sure guide to bringing forth the good fruit of knowledge of the faith, a fervent spiritual life, and adherence to the doctrine and teachings of the faith as taught by Christ.

For this reason then, Holy Mother Church presents also the words of St. Paul to the Romans in today’s Epistle, highlighting the importance of avoidance of sin, and seeking ought shepherds who will instruct their flock in the path of grace. “But now being made free from sin and become servants to God, you have your fruit unto sanctification, and the end life everlasting. For the wages of sin is death. But the grace of God, life everlasting in Christ Jesus our Lord.”