Christmas night and the Virgin's love for her Son. 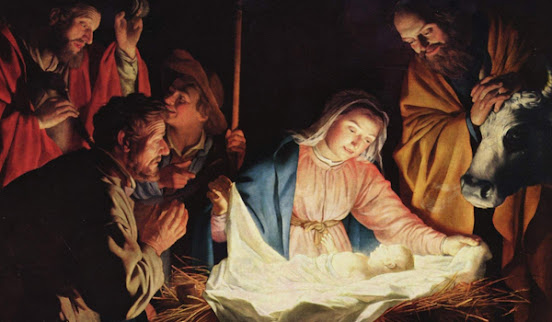 IN his beautiful commentary on Mass of midnight on the quiet and still night of Christmas, Dom Gueranger writes thus: “It is now time to offer the Great Sacrifice, and to call down our Emmanuel from heaven: he alone can fully pay the debt of gratitude which mankind owes to the Eternal Father. He will intercede for us on the Altar, as he did in his Crib. We will approach him with love, and he will give himself to us.”

The holy abbott has many different sections in his commentary for Christmas Day, but these few lines from his treatise about the Mass highlight some of the beauties of this wonderful night.

The period of yearning, preparation and longing is over. Now is the time for joyous celebration at the birth of the Saviour. At midnight Mass, despite the pomp and glory which accompany the happy sounds of the organ and choir, a certain stillness nevertheless prevails.

The Church has waited for this moment for weeks on end. Now She accompanies the Virgin in the final few moments before the Christ child is brought forth. So it is therefore, that the three Masses of this day accentuate the solemnity of the moment which the Church now celebrates.

“But such is the greatness of to-day’s Mystery, that the Church is not satisfied with only once offering up the Holy Sacrifice. The long-expected and precious Gift deserves an unusual welcome. God the Father has given his Son to us; and it is by the operation of the Holy Ghost that the grand Portent is produced: let there be, then, to the ever Blessed Three, the homage of a triple Sacrifice.”

Such threefold celebration of the Mass allows the Church to meditate on three different aspects of the feast, notes Gueranger.

“Besides, this Jesus, who is born to-night, is born thrice. He is born of the Blessed Virgin, in the stable of Bethlehem; he is born by grace, in the hearts of the Shepherds, who are the first fruits of the Christian Church; and he is born eternally from the Bosom of the Father, in the brightness of the Saints: to this triple Birth, therefore, let there be the homage of a triple Sacrifice.”

This first Mass, the Mass of midnight, is that which has above the other two (if such a thing can be said) a more particular dedication to the Blessed Virgin. Her love for Christ on this night overflows, and her desire is for all to come to love Him as she loves the babe before her.

“The first Mass honours the Birth according to the Flesh, which, like the other two, is an effusion of the Divine Light. The hour is come: the people that walked in darkness have seen a great Light; Light is risen to them that dwelt in the region of the shadow of death [Isa. 9:2]. Outside the holy place, where we are now assembled, there is dark Night: material Night, caused by the absence of the sun; spiritual Night, by reason of the sins of men, who either sleep in the forgetfulness of God, or wake to the commission of crime. At Bethlehem, round the Stable, and in the City, all is deep darkness; and the inhabitants, who would not find room for the Divine Babe, are sleeping heavily: will they awaken when the Angels begin to sing?

Midnight comes. The Holy Virgin has been longing for this happy moment. Her heart is suddenly overwhelmed with a delight which is new even to her. She falls into an ecstasy of love. As her Child will one day, in his almighty power, rise through the unmoved barrier of his Sepulchre; so now, as a sunbeam gleaming through purest crystal, he is born, and lies on the ground before her. With arms outstretched to embrace her, and smiling upon her: this is her first sight of her Son, who is Son also of the Eternal Father! She adores - takes him into her arms - presses him to her heart - swathes his infant limbs - and lays him down in the manger. Her faithful Joseph unites his adoration with hers; and so, too, do the Angels of heaven, for, the Royal Psalmist had sung this prophecy of their adoring him on his entrance into the world [Ps. 116:7, Heb. 1:6]. Heaven opens over this spot of earth, which men call a Stable; and from it mount to the Throne of the Eternal Father the first prayer, the first tear, the first sob of this his Son, our Jesus, who thus begins to prepare the world’s salvation.

The eyes of the faithful are now riveted on the Sanctuary, where the same Jesus is to be their Holy Sacrifice. The procession of the sacred Ministers has entered the Holy of Holies, and the Priest comes with them to the foot of the Altar. The Choir is singing its opening-canticle, the Introit; where we have our God himself speaking to his Son, and saying: This Day have I begotten thee. Let the Nations rage, if they will, and be impatient of the yoke of this Babe of Bethlehem; he shall subdue them and reign over them, for he is the Son of God.