Feast of the Immaculate Conception 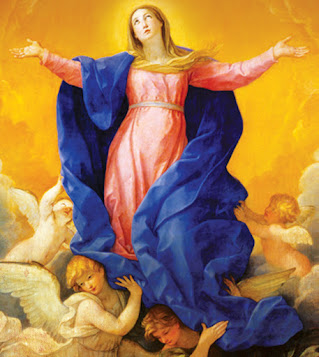 Happy and blessed feast of the glorious Immaculate Conception! The Church devotes this day, planted firmly in the midst of Her preparation for the arrival of the Christ child, to honour the Blessed Virgin, conceived without sin, a pure and spotless creature on whom the devil had no hold.

Mary’s Immaculate Conception is of course so intimately linked to her Divine Motherhood. Could it have been, that He who came into the world to release fallen man from sin, should come of a woman who was also subject to sin? Or would it be so that she who delivered the Saviour, should be subject to the rule of satan?
Truly, the Immaculate Conception of Mary is, as with all of her titles, so intimately interconnected, but especially with her vocation to be the Mother of God.
St. Alphonsus Ligouri, the great Marian devotee, writes on this feast in his beautiful book, The Glories of Mary. He notes that her preservation from sin was an act of each of the three Persons of the Trinity, an act of love towards she who was to bring forth Life. An act of love towards Truth and Justice, and to she who was to join the Redeemer in her Co-Redemption.

A brief portion is contained here below, but it is well worth reading the entire sermon, a copy of which can be found online.

In the first place it was becoming that the Eternal Father should preserve Mary from the stain of Original Sin, because she was His Daughter, and His first-born daughter, as she herself declares: ‘I came out of the mouth of the Most High, the first-born before all creatures.’ [Eccl. 24: 5] For this text is applied to Mary by sacred interpreters, the holy Fathers, and by the Church on the solemnity of her Conception…This being the case, it was quite becoming that Mary should never have been the slave of Lucifer, but only and always possessed by her Creator; and this she in reality was, as we are assured by herself: ‘The Lord possessed me in the beginning of His ways.’ [Prov. 8: 22]

Besides this, it was quite becoming that the Eternal Father should create her in His grace, since He destined her to be the repairer of the lost world, and the mediatress of peace between men and God; and, as such, she is looked upon and spoken of by the holy Fathers, and in particular by Saint John Damascene, who thus addresses her: ‘O Blessed Virgin, thou wast born that thou mightest minister to the salvation of the whole world.’

For this reason Saint Bernard says, ‘that Noah’s ark was a type of Mary; for as, by its means, men were preserved from the deluge, so are we all saved by Mary from the shipwreck of sin: but with the difference, that in the ark few were saved, and by Mary the whole human race was rescued from death.'

Saint Bernard says, ‘that the Creator of men becoming Man, must have selected Himself a Mother whom He knew became Him.’ And as it was becoming that a most pure God should have a Mother pure from all sin, He created her spotless. Saint Bernardine of Sienna, speaking of the different degrees of sanctification, says, that ‘the third is that obtained by becoming the Mother of God; and that this sanctification consists in the entire removal of Original Sin. This is what took place in the Blessed Virgin: truly God created Mary such, both as to the eminence of her nature and the perfection of grace with which He endowed her, as became Him Who was to be born of her.

Here we may apply the words of the Apostle to the Hebrews: ‘For it was fitting that we should have such a high priest; holy, innocent, undefiled, separated from sinners.’ [Heb. 7: 26]

Saint Augustine says that ‘Mary was that only one who merited to be called the Mother and Spouse of God.’ For Saint Anselm asserts that ‘the Divine Spirit, the love itself of the Father and the Son, came corporally into Mary, and enriching her with graces above all creatures, reposed in her and made her His Spouse, the Queen of Heaven and earth.’ He says that He came into her corporally, that is, as to the effect: for He came to form of her immaculate body the immaculate body of Jesus Christ, as the Archangel had already predicted to her: ‘The Holy Ghost shall come upon thee.’ [Luke 1: 35]

And therefore it is, says Saint Thomas, ‘that Mary is called the temple of the Lord, and the sacred resting-place of the Holy Ghost; for by the operation of the Holy Ghost she became the Mother of the Incarnate Word.’

And now, had an excellent artist the power to make his bride such as he could represent her, what pains would he not take to render her as beautiful as possible! Who, then, can say that the Holy Ghost did otherwise with Mary, when He could make her who was to be His spouse as beautiful as it became Him that she should be?