Role of Mary in the spiritual life. 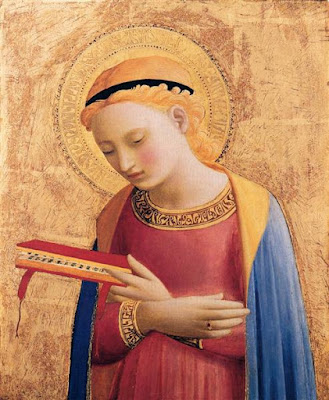 In the benevolence of the will of God, we have been given a multitude of mediators with Him, in order that we might have every aid in attaining eternal life. Of course the foremost of these intercessors is the Blessed Virgin Mary, which is most fitting since it is she how suffered alongside Christ at the foot of the cross. The honour which we render to any creatures of God but particularly Mary is not some form of idolatry, but rather a faithful worship of God. We attribute no power to their intercession in itself, but acknowledge that in praying to Mary or any particular saint, we are ultimately adoring and glorifying God through His exalted and saintly creation. Additionally, the saints are in Heaven through the very practice of the perfection of the spiritual life, and hence we should seek to imitate those who have gone before, who are now rewarded with the prize of eternal glory. It is logical therefore that she who is closest to Christ should be the one to whom we can turn most of all and who will be our greatest aid in spiritual trials.

Mary’s dignity rests upon her Divine Motherhood and from this dogma stem all other truths about her. At the Annunciation Mary uttered her fiat, ‘let it be so’, her joyful acceptance of the uniting of her will to God’s will. It is upon this moment that the entire history of redemption rests, for at this instant Mary lovingly united her will to God’s and consequently a number of effects are brought to happy fruition. She becomes the Mother of God; the co-operator in the act of redemption and mediatrix of all graces; the mother of the Church and as such the model and most precious member of the Church; she becomes the surest way to draw close to the Sacred Heart and the Divine Godhead. Due to her plenitude of grace and role as the Mother of God, she was “especially predisposed to cooperation with Christ, the one Mediator of human salvation. And such cooperation is precisely this mediation subordinated to the mediation of Christ”. (1)

John the Evangelist describes Calvary thus: “There stood by the cross of Jesus, his mother, and his mother's sister, Mary of Cleophas, and Mary Magdalen. When Jesus therefore had seen his mother and the disciple standing whom he loved, he saith to his mother: ‘Woman, behold thy son. After that, he saith to the disciple: Behold thy mother”. (John 19:25-27)

Her position beside the cross is one of suffering and offering. Christ styles her as ‘woman’, evoking the words of Genesis 3:15; here Mary is crushing the devil’s head and her seed is performing the salvific and redemptive death promised to Adam and Eve. From the agony of the cross, Christ gives His mother to us and to the Church, in order that we might have the most sure means of reaching sanctity and eternal beatitude with God. Indeed it is due to Mary’s joint suffering with Christ throughout her whole life, but especially on Calvary, that she is able to merit graces for mankind, whilst remaining completely subject and dependant upon Christ. St. Louis de Montfort reminds us of this in his famous work of devotion to Mary, when he writes that she is the “means which we must make use of to go to Him”.(2) His Marian theology is based on the truth of the intimate union between Christ and His mother, as well as on the boundless love which they have for each other and for mankind. Mary is the Queen Mother, whose requests cannot go unheeded at the Divine throne and thus she is not only the perfect mother but the surest guide to heaven.

Pope Leo XIII also taught the faithful the importance of devotion to Mary, as well as the magnitude of the gift that she is to us; “To thee we lift our prayers, for thou art the Mediatrix, powerful at once and pitiful, of our salvation”.(3) Her lifelong act of co-redemption means that she becomes a meritorious cause of grace for us and the bestower of graces.

Not only does she subordinately merit grace, but she is the channel of all graces. In the above passage of St. John’s Gospel, we read that Christ gives Himself to us through His mother, and wishes for us to return to Him through her. The great doctor of the Church, St. Alphonsus Ligouri, expresses the teaching of the Church succinctly in these few lines:

Mary, then, having by the merit of her sorrows, and by sacrificing her Son, become the Mother of all the redeemed, it is right to believe that through her hands Divine graces, and the means to obtain eternal life, which are the fruits of the merits of Jesus Christ, are given to men.(4)

Such a teaching is inherently present in prayers like the Litany of Loreto and the Hail Mary, where we beseech Mary to pray for us now and at our death. These familiar prayers can oft be glossed over without dwelling on the great import in the words. But St. Louis de Montfort was so keenly aware of the importance of devotion to Mary that his great Marian treatise proposes slavery to her. Not the form of slavery which is conjured up in our minds when such a term is used, but rather a state whereby one gives himself to Mary in such a manner that she can direct all to God's glory. It is a slavery not of domination or cruelty but of love. Through such a consecration of self, one entrusts his life, activities and powers to Mary in order that she might direct them to the greater glory of God and the attainment of heaven. Indeed St. Louis-Marie declared that such consecration was the greatest means of obtaining and preserving Divine wisdom.

The role of Mary in the spiritual life is of utmost importance. Whilst some seek to ignore her, claiming that Marian devotion is idolatry, Catholic teaching clearly shows that she properly guides and directs the spiritual life, without diverting attention to herself. The spiritual life is the life of Christ, living in and through Him. But this cannot be done without living so as to do all things for and through Our Lady. Not content with giving of Himself, Christ gives us the precious gift of His mother, who is to be the mother of all and the Mediatrix of graces. To be able to faithfully follow Him, we thus need to draw close to her.