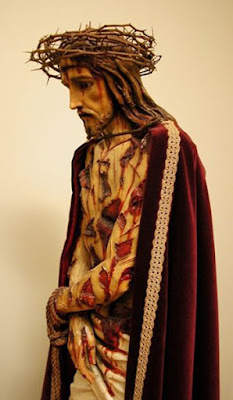 July is given to the devotion to the Most Precious Blood of Christ, a most fitting way to follow the month long devotion to the Sacred Heart. First through nurturing a devotion to the Sacred Heart, we can know the great love which God has for us, then through a devotion to the Precious Blood we can dwell on that blood which was sent for our salvation. The time of Lent and Passion-tide is perhaps a distant memory, but the Church provides this month, beginning with the feast of the Precious Blood, as an opportunity to recall the great sacrifice that Christ made of Himself. On Good Friday, Corpus Christ, the Sacred Heart feast and the Precious Blood feast, we have had occasion to dwell and meditate upon the mystery of Christ’s incarnation and redemptive death. Not satisfied with these feasts, we have now a month long period in which to renew our thoughts and meditations which are centred upon Christ crucified. Perhaps with the periods of Lent and Easter being now finished, it is easy to fall into old habits or lazy routines without great times of penance of feasting to focus the mind. Even the month of June is over, one with many beautiful feasts, and the year seems to be settling into a state of normality, with the focus predominantly on the secular holidays as the pinnacle of the year.

This is where the month of the Precious Blood is such a timely devotion to have for this month of July, for it is a chance to re-invigorate the spiritual life at a time when it is in all likelihood suffering from a lack of motivation. Fostering a devotion to the Precious Blood is a wonderful way in which to deepen our love of the Mass and the Holy Eucharist, particularly at a time when more widespread access to Mass is more possible. As we approach the altar rails once more, a question arises as to how this cruel deprivation of the Holy Eucharist has affected us. Has it made us more lukewarm of has it been the cause of a renewed zeal and love of Christ? There are few better devotions which can serve to spur us on in our pious return to the sacraments than that of the Precious Blood. When faced with the thought of the bruised and torn body of Christ, from which blood poured out for our salvation, then it is hard not to be moved in a returning motion of love.

A devotion to the Precious Blood is a devotion to the wounds of Christ and a love of the suffering Saviour. The same shedding of blood which His executioners intended to be but a part of the cruel torments and death, became the blood which washes over the members of His Church. “The executioners, after having lacerated the whole body, continue without mercy to lash the wounds already inflicted, and add pain to pain”.(1) The blood shed in each of the lashes of the scourge, when the crown of thorns was placed upon His head, in every fall, and in the nailing to the cross: all this was for each of us. This complete emptying of self to the point of death, was in order that there might be no hold of sin over man, nor slavery to the devil. It is this blood which washes and renews us, the blood of the Innocent being for man the water of life and salvation: “Go my soul, and wash thyself in the precious blood with which that fortunate floor is bathed”.(2)

A single drop of that Precious Blood would have been a more generous ransom than was needed for the entire world, yet this was not that which was given. Christ did not shed His blood whilst retaining some part for Himself: He shed it entirely, freely and without reserve. The saints constantly teach that such a selfless gift of the Almighty and Innocent Saviour, requires a similiar response from man. Take, for example, the daily occurrence of receiving an act of generosity. The charitable soul wishes to repay such an action in like manner. Yet this is no simple act of daily charity, but the immolation of God who desires to give of Himself in such a manner that He suffers death. This calls for a sacrifice of self in return; indeed, for the spiritual life, one might say that it requires such a self-sacrifice. “A single drop of Thy blood was sufficient to save me; but Thou dost wish to give me the entire of it without reserve, that I might give myself to Thee entirely and without reserve. Yes, my Jesus, I give my whole being to Thee without any reserve”.(3)

In forming a devotion to the Precious Blood, it is beneficial to avail of texts or meditations on the passion. Only by learning more of what Christ suffered can one truly come to gain an understanding of the proper response of love which is required. The Catholic faith is not built upon niceties or warm feelings, but upon the very real bloody torments and death of Christ.

“It is true that this blood was first poured forth in the garden, and was also poured forth in the crowing with thorns, and by the driving in of the nails; but the largest portion was shed in the scourging, which was also a cause of great shame and insult to Jesus Christ, because this was a punishment inflicted only on slaves…It was revealed to St. Bridget that one of the executioners first commanded Jesus Christ to strip himself of his garments…The revelation stated that the stripes not only struck him, but ploughed into his most holy flesh. He was so torn open that, as the same revelation declares, his ribs appeared cut bare”.(4) Such are the words with which St. Alphonsus depicts the shedding of blood.

Nurturing a devotion to the Precious Blood is thus one of the surest ways to deepen a real and lively love of God. When we come face to face with such graphic depictions of the torments which He endured, it is nigh impossible not to be moved and to seek to console Him in the reciprocal offering of ourselves. In the month of July, we have such an opportunity to do so, through the private and public devotion to His Precious Blood. In gazing at a crucifix, particularly at a more graphic depiction of the image, one can note well the blood which is the price of our redemption. The tender love of God, which moved Him so to suffer and die, can only be honoured with a return of the same love.