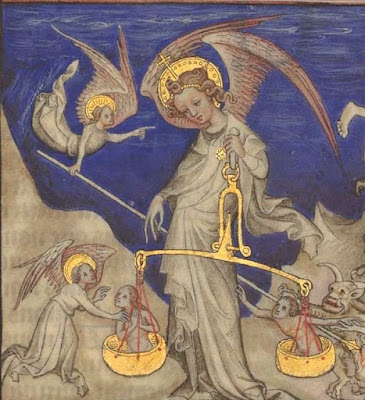 “Give an account of thy stewardship” - these words stand out as perhaps the most noteworthy in today’s gospel for the eighth Sunday after Pentecost. It is with these words that the rich man both questions, rebukes and admonishes his unfaithful steward who had squandered the gifts which he had been given. Shaken and thrown into confusion, the unfaithful steward was brought sharply to a realisation of the evil manner in which he had lived.

It does not take a great master of Scripture to be able to discern that this same question can and will be made to each of us at the seat of judgement. In that awful hour there will be no escaping the question or seeking to avoid it through distractions and other pursuits, by which one might seek to avoid the murmurings of conscience whilst on earth. The years spent in this life, be they many or few, will result in this single question, which is the swift assessment of an entire life. Indeed, there needs be no lengthy examination, because the answer is black or white, clear and precise - either our stewardship has been used well or it has not.

Yet since, as examined a few Sundays ago, death is certain and its arrival time is not. This question of stewardship is not something which we have only to be concerned with at judgement day, but at the start and close of every day. It truly becomes the voice of conscience, whereby we hold our actions to account before the sight of God and can ask if they constitute a worthy service for Him. So states St. Paul in the epistle for today, when he writes “for if you live according to the flesh, you shall die; but if by the Spirit you mortify the deeds of the flesh, you shall live”. (Romans 8:13) If one wishes to be able to offer a worthy stewardship to God, then he must take the second of these options, mortifying the flesh and thus attaining life.

Yet why then does such a life attract so much derision from those around? Or why also must it be that those who wish to be true followers of Christ must take this route of dying to self, whilst one’s friends and neighbours live heartily according to the flesh and seem to reap no ill rewards?  One of the great struggles of the Catholic life is foregoing worldly enjoyments yet seeing the children of the world thrive on them. It seems to be a contradiction of the Gospels, since those around who do not mortify the flesh in any way are enjoying life to the full and reaping all kinds of earthly rewards.

The answer to this conundrum lies in God’s justice and love. In His infinite justice He rewards each according to his kind. Thus, for those who have chosen not to be worthy stewards and prefer to spend their time seeking after the things of this world, He rewards them with precisely that. They have turned their back on suffering, the pursuit of virtue and the life of grace and opted instead for something far more tangible and immediate. But such happiness is of course short lived, for this life is only measured in tens of years yet we have an eternity before us. The earthly life of an unfaithful steward is perhaps spent in relative comfort in worldly pleasures, yet no more is given to such a soul. Through God’s justice such souls are rewarded with pleasure in this life because there shall be none in the next.

But for a faithful steward, one who seeks to be a faithful son of God, living the virtues and seeking after perfection, then the life of this world is but a short time in which to perfect oneself. St. Paul’s epistle states “whoseover are led by the Spirit of God, they are the sons of God”.(Romans 8:14) To be a worthy steward in the manner of the Gospels necessarily involves sacrificing the pleasures which are the lot of the un-worthy stewards. It means forgoing the pleasures of the temporal world in favour the promised delights of the celestial paradise. It means suffering for and with Christ: “heirs indeed of God, and joint heirs with Christ: yet so, if we suffer with him, that we may be also glorified with him”. (Rom 8:17). To be a faithful steward, indeed a true son and heir of God, requires a great desire for God and a surrender to His holy will. It necessitates a certain amount of suffering in order that one might merit the crown of glory.

This is perhaps the point upon which non-believers and unfaithful stewards struggle with, for the aspect of suffering can, for them, never become a good or a blessing. Without the eye of faith, suffering is a great evil which must be avoided at all costs. Beliefs and ideologies might be firmly held and yet abandoned in order to avoid suffering. But for the adopted child of God, suffering is an imitation of Christ, a way to unite ourselves to Him and to become worthy of following Him. In time, suffering becomes a joy which the faithful soul eagerly accepts, since it will bring him closer to God.

In a world centred upon self-gratification, instant satisfaction and personal pleasure, any remnant of suffering as a good is fast disappearing, even within the Church. For Catholic teaching on suffering is not compatible with modern society, and yet due to the lack of catechesis, sound preaching and an active public life of the Church, it is modern thought and not Catholic teaching which is proving to be the prevalent characteristic in the world. Yet those in the Church have been given a great gift which is theirs to protect, preserve and promote - namely the faith. One cannot account oneself as a faithful steward if one does not seek to defend the faith or accept the suffering that comes with this. Suffering is not an evil to be avoided at all costs, or something to be stoically accepted with no greater understanding. It is a gift whereby one might purify himself, grow in virtue and imitate Christ. In fact, it is the path to life: “For if you live according to the flesh, you shall die: but if by the Spirit you mortify the deeds of the flesh, you shall live”. (Rom 8:13)

The children of the world, the unfaithful stewards, see no greater pleasures than those which are before them and strive to avoid all suffering. Their reward and pleasure is indeed that which they can see, because there is none to come hereafter. But for the good stewards and the children of God, whilst there is hardship and trial in this life, the promise of heavenly glory and union with God far outweigh the sorrows of life, which are but fleeting in comparison to eternity.