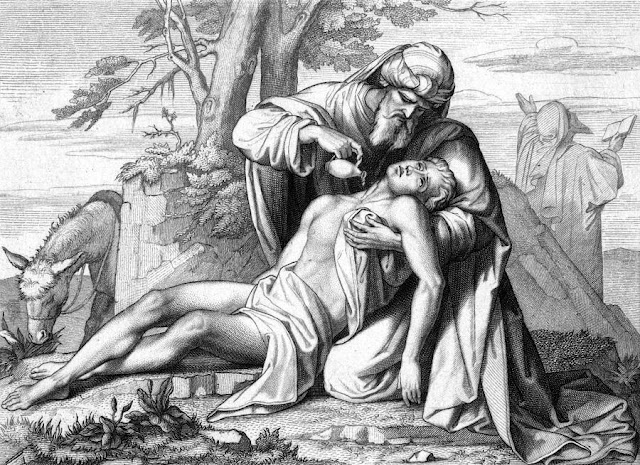 Such is the answer given by Christ to the young lawyer who questioned Him regarding the law. The first clause of the statement is straightforward to explain, ‘love the Lord thy God’. Putting it into practice is however considerably more difficult since it involves a certain death to self. Previous articles on this site have mentioned ways in which this can be done, by practicing the presence of God and by developing a great love for the Holy Eucharist. Having a lively devotion to Mary as Queen and Mother is invaluable in drawing close to her Son.

But that which is very commonly mis-taught is the second part, namely the love of neighbour. It is this which must be the focus of our thoughts this morning, for how is one to love one’s neighbour correctly, especially in the spiritual realm?

The answer is of course found in the above words of Christ - to love thy neighbour as thyself. This involves seeing a neighbour as another self, wishing for him all that one would wish for oneself. Ultimately this involves willing that he save his soul, since this is the highest good which one wishes for self. Thus as spiritual life and then physical life are wished for oneself, they must be wished for one’s neighbour.

Willing that a neighbour might have physical life is easy enough, for there are few who actively wish that harm or evil might befall another. One the face of it, willing the spiritual life of a neighbour is also easy, because who can really wish that he be admitted to Heaven but not a neighbour, without being aware of the hypocritical nature of such a thought.

It seems though that the manner in which one wills salvation for the neighbour is the aspect which most often is the stumbling point. This is because modern society is centred upon self-fulfilment in whatever manner a person chooses. If a man chooses to engage in all sorts of immoral behaviour because he feels that way inclined, then society promotes and supports such actions so that he might be ‘fulfilled’. But, true love of neighbour necessitates that one does not condone immoral behaviour but rejects it and calls it out for what it is. For the good of the soul of such a man, as well as for the good of the souls to whom he might give scandal, moral wrong must be denounced as an act of charity. If one witnessed a man about to commit suicide, then the bystander would surely attempt to stop the unhappy man from performing an action which would be fatally injurious to his life. Even more so then, must we be able to do likewise in the spiritual life.

Such is the motive behind the valiant men and women who stand outside the abortion clinics, praying and counselling the young mothers so that they might not abort their unborn child. Judgement and condemnation are not their thoughts, but rather true love of neighbour, seeking to help these mothers to save a life and save souls.

Love of neighbour necessitates the uncomfortable part of telling the truth, particularly when they do not wish to hear it. It demands the teaching of truth out of love of God and love of neighbour, because this Truth is the highest good which anyone can conform to. It is love of neighbour which moves good Catholics to protest abortion, gay marriage, modern perverse education in schools and the proliferation of so many immoral ‘rights’. These and many other moral evils must be publicly denounced and protested if the command to love God and neighbour is to be fulfilled.

As many will know, protesting these things is nowadays a sure way to gather public outcry and fall foul of the police, who ironically defend a distorted version of love of neighbour. Our societies in various countries are built upon a profound rejection of God and lack of concern for neighbour. Only then could a society so publicly and unashamedly offer the murder of innocents as ‘healthcare’.

The farcical nature of modern society is found in its attention to self, in the name of love for all. In such a permissive state, wherein nearly every action and possible depravity is permitted, there can be no lasting rule of law, no true civil peace or prosperity and no true happiness. For when God is so thoroughly rejected and denied in society, then man finds himself centred upon himself and this selfish form of living can never satisfy. He has no means or incentive to help his neighbour out of the practice of sin, for what is sin in a society where evil is freely advocated?

How is such a state, the current state of most countries, to be remedied? The two-fold command of love must be practiced. Thus, society and man must return to loving God for His own sake and as the chief end of life. When He has been returned to His proper place in the life of man, then morality will be refocused away from selfish desires and back towards the noble pursuit of virtue. Only then can love of neighbour be truly practiced, whereby a man helps and guides his neighbour to the practice of virtue.

Hence a Christ centred love of self and neighbour requires an ardent living of the faith and teaching of the truth. It does not tolerate compromise and thus true charity also entails caring for the soul of others. Any law or social custom which panders to the lower desires of man, at the cost of the soul, is thus not truly concerned with good, but is a perversion of truth and order.

Loving a neighbour as ourself, and consequently caring for the soul of another, is a true reflection of the love which Christ has for man. It is in this manner, as He teaches, that one can hope to be saved.