The chains of Peter. 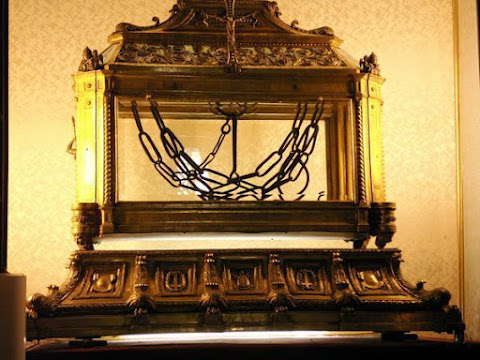 Yesterday the Church traditionally celebrated the feast of St. Peter in Chains. It is a feast which commemorates the time when the first pope was led out of imprisonment by an angel and delivered back to his flock. The early Church were praying constantly for his safe release, crucially aware of their own need of guidance and protection from this first vicar of Christ. As an answer to prayer, God sent an angel who led St. Peter out of his cell, past the guards and freed him from his chains. Those chains were visible chains, iron bonds which kept the prince of the Apostles secured in a cell. Many saints and martyrs have shed their blood for the faith whilst being held captive by such chains. To the un-Christian world, such chains served to set the martyrs apart as outcasts, visibly imprisoned by fetters and eventually killed for love of God. These visible chains were for many centuries, the mark of the persecution of the Church. She was nourished by the blood of Her martyrs, who clung to the truth and remained steadfast in the faith, and who thus were shackled with chains in imitation of St. Peter.

Today instances of such persecutions are less prevalent, although still very much present, particularly in communist China. One might think therefore that the Church has freed herself from any such chains and stands in an exalted position in the world. But no - whilst there are few visible chains, the invisible chains are very real and so much more dangerous. In place of handcuffs placed upon Her members, the Church is now increasingly attacked by those of Her members who wish to shackle Her with the chains of relativism, cowardice, scandal and ultimately heresy. Those who should be foremost in teaching and proclaiming the truth have abandoned the cause and aligned themselves with the world. In turn, these past few months have seen widespread state interference in Church worship, with the cessation of public Masses being enforced in an unprecedented manner.

But perhaps, one should not be so surprised at the actions of a God-less world: “If the world hate you, know ye, that it hath hated me before you”. (John 15:18) Again the Scriptures read: “He that is not with me, is against me: and he that gathereth not with me, scattereth”. (Matt 12:30) There is really no middle ground in the service of God; either one acts for or against Him. Thus, those who have already given themselves over to the service of themselves, should not surprise us when they seek to attack and persecute the Church, albeit in a currently (mostly) un-bloody manner.

Yet regarding those who are in the Church, indeed leading the faithful, it is always deeply unsettling when these souls seek to enslave the Church to the practices of the world. Let us recall that it was the English Bishops who first ordered the closing of the churches on March 20th, days before the Government decree.(1) There is an increasingly evident trend amongst a large part of the hierarchy, to give primary care to bodily health at the cost of spiritual health. The global phenomenon of the closure of Churches meant that Catholics the world over were denied access to the sacraments. At a time when the possibility of death was supposedly increased from the ‘pandemic’, faithful souls found themselves unable to confess their sins, receive Holy Communion or even the last rites.

The reason given for this? The reason given was “a moral duty to protect life”. (2) A moral duty to protect life - when one reads this through, the underlying thought of many of the liberal clergy becomes immediately apparent. Namely, that when push comes to the proverbial shove, what matters most of all is this earthly life, not the spiritual life nor the attainment of heaven. Is this not precisely the teaching which Christ warned of in these words: “fear ye not them that kill the body, and are not able to kill the soul: but rather fear him that can destroy both soul and body in hell”. (Matt 10:28). Certainly, we have a duty to protect all innocent life, (an important distinction to just ‘protect life’, for traditional Church teaching permits the use of the death penalty and allows one to use justified deadly force on certain occasions), yet such a duty can never act in opposition to the primary duty which we have of offering worship to God. But this argument has been covered by many, and indeed was the subject of my article here, some weeks ago on Good Shepherd Sunday.

It seems though that the forces of the world, under the disguise of clerical collars, have gone further in their promotion of the physical life at the cost of the spiritual. The recent statement by the Catholic Bishops Conference of England and Wales regarding the matter of vaccination has stated that Catholics have a “prima facie duty to be vaccinated”.(3) Certainly, we have a duty to give honour and glory to God, to attend Mass on Sundays, receive the sacraments, to do good and avoid the practice of sin. But to be vaccinated…Quite simply, the bishops do not have the authority to make such a statement regarding this means by which individuals might seek to maintain their health. Nor should they even be suggesting the method of widespread vaccination, since such an approach is being used to further global control and a new world order.(4) Behold the chains of the modern world!

But there is more in the bishops’ statement which must scandalise any Catholic. They take an unapologetically anti-life stance regarding the use of vaccinations made from the cells of aborted babies. To justify this outrage, they offer this explanation: “Human society has often benefitted from the wrongs done in the past for which we must repent”.(5) In these words, the bishops give another example of a duplicitous nature, for they note the evil of abortion and yet mention that in time this evil effectively becomes less significant. They thus fall foul of the error of proportionalism, which seeks to justify a moral evil by focussing on the good effects. This was explicitly condemned by John Paul II, in Veritas Splendor, §75-76. One could not even seek to justify the statement’s error by appealing to the principle of double effect, since this states that the action must be good or at least morally indifferent. In short, the statement seeks to bind the Church in the chains of error and sin, making Her implicit in the rejection of the truth.

In a masterclass of condescension, the statement further mentions that the bishops “acknowledge the distress many Catholics experience when faced with a choice of not vaccinating their child or seeming to be complicit in abortion”.(6) 'Distress' here being the word of choice of the astute liberal, who wishes to cloud his error in fine language and polished rhetoric. For yet again the bishops are placing the importance on mortal life, on vaccination, instead of the moral life. Yet again the duty of acting morally and honouring God is placed beneath the modern teaching of preserving one's physical health at all costs. Perhaps the bishops might state that the distress one might feel from using such a vaccine would be a benefit to human society in future years, since we have often benefited from wrongs done in the past.

Perhaps also, the bishops wish us to believe that the world is not in a state of chaos, dominated by sin and depravity, and thus we can base the morality of our actions on the word of the world. Certainly, this is what they seem to mean in these words: “all clinically recommended vaccinations can be used with a clear conscience and that the use of such vaccines does not signify some sort of cooperation with voluntary abortion”.(7) They seem to be ruling out even the slightest possibility that the authorities of the world, who so freely promote abortions as a human right, ought not to be trusted. The bishops go further, by letting such people be the guidance of our moral choices. The chains of immorality and heresy are thus freely promoted.

So the chains of St. Peter, so miraculously removed by the angel, have been replaced by those of immorality, relativism and heresy, and by the Church’s own sons. First the Catholic faithful have been deprived of the sacraments and are now being told to use vaccines which are at best of dubious moral value. All this is done in aid of the new god - man. Gone is the primacy of God and instead the world and the worldly clerics have placed man and his physical health in God’s place. Let us make no mistake, the recent statement by the Bishops Conference of England and Wales is not the first nor shall it be the last, which shall promote sin under the guise of virtue. There is a spiritual battle taking place before our eyes and this time the faithful children of God are being oppressed by their wayward shepherds. In recent months, the sudden and rapid increase in chaos, public depravity, public abandonment of the faith and the teaching of error from both spiritual and temporal leaders, cannot be overlooked. The time is fast approaching when faithful Catholics will be persecuted not just by the world, but by those in the Church who have entered into partnership with evil. In case this seems preposterous or even scandalous to so criticise the bishops, let one recall that under Henry VIII there was only one St. John Fisher. The rest chose to preserve their physical health, keep their lives and follow the directives of a heretic king. So one should not be surprised that such a situation is occurring yet again, for after decades of spiritual decline in the Church, such an eventuality should even be expected.

What is the answer to this crisis? To pray and to act. Just as the early Church prayed unceasingly for St. Peter, we must do the same. In a spiritual battle, we must not lose sight of the paramount importance of the spiritual weapon of prayer. Only by fighting evil with this weapon can we hope to have victory. But we must also be prepared to act and take a stand, like St. Thomas More and St. John Fisher. Like them, we must govern our lives by prayer and good works, yet refuse unflinchingly to bend the knee to whatever moral depravity is being promoted. We must protest against the imposition of sin, writing to the bishops, spreading word amongst the Church that there are still those who hold fast to truth and doctrine. With prayer and strong Catholic action we can thus have hope in the words of Mary, “In the end my Immaculate Heart will triumph”.