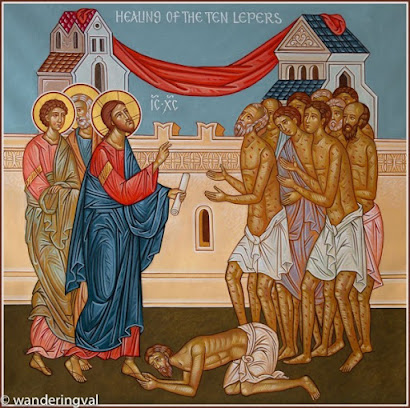 Who, as a child, did not have impressed upon them the importance of saying thank you for gifts given? Or who would have been able to escape the task of writing thank you cards after birthdays and Christmas? Yet even if this childhood training in etiquette did not feature in one’s life, the duty of rendering thanks to another, particularly after a great favour, would not be foreign.

That is why this Gospel initially strikes one as so strange. Is it really possible, one asks, that out of ten lepers who were miraculously healed by Christ, only one returned to give thanks? How did the other nine not think it necessary to do as their companion did, to fall down before Christ giving thanks?

From personal experience, this Gospel can have a tendency to lose its effect if one does not take pause to dwell on it. For after hearing these words the immediate thought it, “Well, I wouldn’t have forgotten to say thank you”. And in an instant, one has ignored any possible teaching which he could have drawn from the sacred texts.

If we take a moment further to dwell on the lines of the Gospel, is it entirely true to say that we would have acted better than the nine ungrateful lepers? Perhaps, in reality, one will find that he is not altogether that different after all. For whilst we can be quick enough to send petitionary prayers to God in rapid fire when our need is great, can the same properly be said with regards to giving thanks? Indeed, are our prayers as swift or numerous when simply rendering adoration and praise to Him? Personally, they are often not.

“But wait”, one might object, “this attack is hardly fair; I have never received such a grace as being cured from leprosy and not given thanks to God”. No indeed, such grievous physical ailments are far less common, yet with sin we freely fall into a greater spiritual ailment. Indeed, through sin one can kill his soul whilst maintaining a healthy body. Hence the Baltimore Catechism describes sin as “any wilful thought, desire, word, action, or omission forbidden by the law of God”.(1) In order to be cleansed from these wilful offences against God, we must come before Him and petition for healing, just like the ten lepers. Yet after receiving the sacrament of Confession and having been cleansed from this spiritual ailment, which is completely our fault, is it not the case that we so regularly forget to render proper thanks to God for the immense graces which He has given? Or even more, is it not the case that we simply fall back into the same habits and the same sins in a matter of days, and so, unlike the lepers, return to the feet of God for His grace every week?

Adoration is based upon an acknowledgement of the majesty and beauty of God. When Christ taught the Our Father, the first intention which He gave was that of adoration of God: “Our Father, who art in Heaven, hallowed be thy name”. God is our end, nothing else can satisfy man, and hence there is nothing better to do in prayer than to spend time in adoration of His perfection. It is for this end that the Divine Office is prescribed for various hours throughout the day and night, so that God might be ceaselessly adored by His Church.

But also we owe our very existence and salvation to God, who sustains and nourishes us constantly. It is to Him that we “owe all that we are, all that we have, whether in the order of nature or of grace”.(2) To Him we must render thanks for His Incarnation, death and resurrection, which have released us from the bonds of sin. Hence prayer is not a practice of the pious but a duty of all. This act of thanksgiving to God is done out of love for Him, which must come before the more selfish interests of petitionary prayers.

Next, we must seek to make reparation for our sins through prayer. Now prayer here can act in a two-fold manner. Firstly it can assist us to recognise our sins and then it enables us to atone for them. Prayers of reparation are in direct opposition to sins, which ultimately are based upon pride. Logically speaking, such prayers should be a pre-requisite before one makes a fresh prayer of petition.

Finally, the fourth end of prayer is that which is all too familiar, petition. There needs to be no explanation or proof of why such prayers are necessary, for they come so naturally. By praying in this manner we are heeding the command of God who stated, “ask and it shall be given you; seek and you shall find: knock and it shall be opened unto you”.(Matt 7:7). If we do not ask then we shall not receive.

These four ends of prayer should serve as a guide for the kind of prayer which we perform. It is all too easy to offer prayers of petition at the cost of the other three. Yet it should chiefly be prayers of adoration and thanksgiving which are the offering one makes to God. In fact, just as we have been commanded to offer prayers of petition in time of need, so are the other three ends of prayer also a duty to perform. How can one hope to have a relation with God if he refuses to adore Him, to thank Him and to ask pardon for his sins?

In order to model oneself upon the grateful leper, one must develop a true conversation and friendship with God. The nine selfish lepers sought to pray only in petition and ignored the other three, more important ends of prayer. One must take careful note of the Gospel, so that the important teaching regarding true prayer, is not lost.