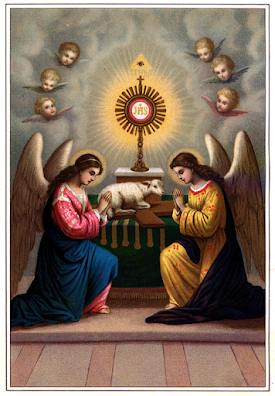 Blessed and happy new liturgical year! The season of Advent hails the commencement of another new year, a year which begins so properly by a period of expectant preparation for the arrival of the Christ Child.

The tone of this season can be a model for the entire year, for what better way to live the remainder of the year, than by continuing in such a spirit of devotion to the Infant King.

St. Paul’s Epistle to the Romans in the Mass today presents this theme, which serves as such a guide for Advent in particular but for the year in general: “knowing the season; that it is now the hour for us to rise from sleep. For now our salvation is nearer than when we believed.”

“The night is passed, and the day is at hand. Let us therefore cast off the works of darkness, and put on the armour of light.” The night of the previous year is passed indeed, yet the day seems further off than ever before. Instead of a happy advance to the Christmas season, the world is beset on all sides by darkness and evil, the like of which has never been seen.

Here, the defeatist will say, to what purpose then is any armour of light? How can we hope to cast off the works of darkness, when they crowd out the light?

Yet, as covered last week, the spirit of the Friend of the Cross is a joyful acceptance of the armour of God, because any fight in His army and for His honour, cannot be in vain. Such a Friend of the Cross even delights in the battle, more than in rest, since only in the spiritual fight can a warrior prove himself in the service of the glorious Captain.

Therefore, now truly is the time to rise from sleep and to take up the armour of light, for it is the duty of all faithful children of God to heed this call.

Advent marks such a time, in which one can be formed in this kind of ‘spiritual knighthood’, in the manner of the medieval squires. It is the time wherein voluntary penances and pious practices serve to curb the selfish impulses which we all have, so as to be able to better serve the Captain without distraction. Advent also allows one to learn the arts of spiritual battle through reading lives of the saints, practicing daily meditation with renewed zeal and availing of the sacraments more frequently.

For what purpose then, does the Church today present Her children with a Gospel commencing with such terrifying prospects? “And there shall be signs in the sun, and in the moon, and in the stars; and upon the earth distress of nations, by reason of the confusion of the roaring of the sea and of the waves; Men withering away for fear, and expectation of what shall come upon the whole world. For the powers of heaven shall be moved.”

Is it to terrify the soldiers in formation, so that they never garner the courage to enter the battlefield? Or is it rather to instil a pious and proper fear of the Lord, learning of what faces those who oppose the Heavenly Captain? It is of course, the latter. Indeed this much is alluded to next in the Gospel passage, when we are told “when these things begin to come to pass, look up, and lift up your heads, because your redemption is at hand.”

Beginning this new liturgical year with the period of Advent, thus allows us to welcome the Infant King at Christmas time, much more worthily formed and trained in the battle to which He shall lead us, but also to be ready for the time when “your redemption is at hand.”

For even though “Heaven and earth shall pass away, but my words shall not pass away.” Thus, in order to adhere to the words of the Divine Captain so that one might remain constant in the midst of the “distress of nations”, the period of Advent is crucial. While the world is busy physically preparing for the day of Christmas, without understanding its meaning, the Church is busy also, forming Her members so that on that same day, they might kneel before the Child in the manger, offering their service in the company of the Friends of the Cross.

Dom Gueranger has these words to say regarding the season of Advent, as drawn from his work The Liturgical Year: “Let those, then, who are not touched by the tidings of the coming of the heavenly Physician and the good Shepherd who giveth His life for His sheep, meditate during Advent on the awful yet certain truth, that so many render the redemption unavailable to themselves by refusing to co-operate in their own salvation. They may treat the Child who is to be born (Isaiah 9:6) with disdain; but He is also the mighty God, and do they think they can withstand Him on that day, when He is to come, not to save, as now, but to judge? Would that they knew more of this divine Judge, before whom the very saints tremble! Let these, also, use the liturgy of this season, and they will there learn how much He is to be feared by sinners.”

“We would not imply by this that only sinners need to fear; no, every Christian ought to fear. Fear, when there is no nobler sentiment with it, makes man a slave; when it accompanies love, it is a feeling which fills the heart of a child who has offended his father, yet seeks for pardon; when, at length, love casteth out fear, (1 John 4:18) even then this holy fear will sometimes come, and, like a flash of lightning, pervade the deepest recesses of the soul. It does the soul good. She wakes up afresh to a keener sense of her own misery and of the unmerited mercy of her Redeemer. Let no one, therefore, think that he may safely pass his Advent without taking any share in the holy fear which animates the Church. She, though so beloved by God, prays to Him to give her this fear; and in her Office of Sext, she thus cries out to Him: ‘Pierce my flesh with Thy fear.’ It is, however, to those who are beginning a good life, that this part of the Advent liturgy will be peculiarly serviceable.”

“It is evident, from what we have said, that Advent is a season specially devoted to the exercises of what is called the purgative life, which is implied in that expression of St. John, so continually repeated by the Church during this holy time: Prepare ye the way of the Lord! Let all, therefore, strive earnestly to make straight the path by which Jesus will enter into their souls. Let the just, agreeably to the teaching of the apostle, forget the things that are behind, (Philippians 3:13) and labour to acquire fresh merit. Let sinners begin at once and break the chains which now enslave them. Let them give up those bad habits which they have contracted. Let them weaken the flesh, and enter upon the hard work of subjecting it to the spirit. Let them, above all things, pray with the Church. And when our Lord comes, they may hope that He will not pass them by, but that He will enter and dwell within them; for He spoke of all when He said these words: ‘Behold I stand at the gate and knock: if any man shall hear My voice will open to Me the door, I will come in unto him.’ (Apocalypse 3:20).”