Septuagesima Sunday - Running the race in the manner of St. Paul 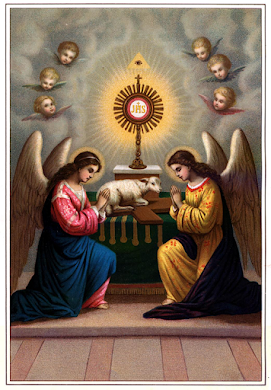 Septuagesima Sunday marks the return of purple to the Church’s liturgy, an occurrence which seems sometimes jarring when fresh from the splendour of Christmas. The many flowers, the beautiful vestments, and familiar Christmas chants and carols, are replaced as the Church begins Her journey towards Lent.

As the liturgical seasons shift so markedly, it can perhaps be easy to become despondent with the rigours and trials which are part of Septuagesima and the rapidly approaching Lent. Christmas time has perhaps been a time of ease, and practices of the spiritual life which seemed so easy when surrounded by the cosy trappings of Christmas, now seem demanding, time-consuming, and un-appealing in the face of a more austere season.

Yet this is precisely why the Church chooses the texts for the Epistle and the Gospel today, in order to encourage Her children in the practice of the spiritual life, as they enter into the preparation for Lent. St. Paul’s first letter to the Corinthians is full of the spirit of Catholic perseverance, as the great missionary describes the nature of the spiritual life.

“Know you not that they that run in the race, all run indeed, but one receiveth the prize? So run that you may obtain. And every one that striveth for the mastery, refraineth himself from all things: and they indeed that they may receive a corruptible crown; but we an incorruptible one. I therefore so run, not as at an uncertainty: I so fight, not as one beating the air.”

This is a key element of the spiritual life which is somewhat uncomfortable to mention, but so crucial. In pursuing perfection one must really strive for the goal. Prizes and medals are not given to all who compete, but to the victor, and it is just so in the pursuit of heaven. Paul wishes to galvanise the Corinthians, and members of the Mystical Body today, by highlighting the great risk they run in not committing themselves to the race. It is a race unlike any other, not one which can be re-run next year if one is not successful, or in which second place is some consolation, but rather a race in which one is either for God or against Him.

In order to certify that one stays on the right path, Paul advises the practice of mortification, a practice which is helpful even in this pre-Lenten time. “But I chastise my body, and bring it into subjection: lest perhaps, when I have preached to others, I myself should become a castaway.” Indeed, it is perhaps advisable to accustom oneself to some small practice of mortification, so that when Lent properly begins, a faithful soul is already in the proper spirit in which to earn the graces proper to the season. It is a way by which one can begin to re-learn the spirit of self-denial, which is so necessary during Lent, but so often easily forgotten over Christmas tide.

St. Paul continues with a warning, reminding souls that those who outwardly performed the actions of God, were not pleasing to Him. “For I would not have you ignorant, brethren, that our fathers were all under the cloud, and all passed through the sea.  And all in Moses were baptized, in the cloud, and in the sea: And did all eat the same spiritual food, And all drank the same spiritual drink; (and they drank of the spiritual rock that followed them, and the rock was Christ.)  But with most of them God was not well pleased: for they were overthrown in the desert.”

In the passage following that which is used in the Epistle, Paul continues to explain why this was the case. He notes that even though they ate and drank the spiritual drink from God, the children of God coveted evil things. Thus Paul issues another warning, so appropriate in this Septuagesima time: “these things were done in a figure of us, that we should not covet evil things as they also coveted.” The cost of coveting evil things, is incurring the displeasure of God and the loss of one’s soul.

This reflects what St. Alphonsus Ligouri writes in his own homily for today, pointing out the meaning of the Gospel as being an instruction on the salvation of one’s soul. The text, drawn from St. Matthew’s Gospel, recounts the parable of the labourers in the vineyard, and the words of Christ: “For many are called, but few chosen.”

“The vines of the Lord are our souls,” says St. Alphonsus, “which he has given us to cultivate by good works, that we may be one day admitted into eternal glory. Christians believe death, judgment, hell, and Paradise: but they live as if they believed them not as if these truths of faith were tables or the inventions of human genius. Many live as it they were never to die, or as if they had not to give God an account of their life as if there were neither hell nor a heaven. Perhaps they do not believe in them? They believe, but do not reflect on them; and thus they are lost. They take all possible care of worldly affairs, but attend not to the salvation of their souls.”

With these words, the great preacher sets the tone for Septuagesima, mirroring the warning given by St. Paul, that one must not become lax, but ever remember the heavenly goal and the terrible cost of straying from the path of God.

“Brethren, remember that, if you save your souls, your failure in every worldly transaction will be but of little importance: for, if you are saved, you shall enjoy complete happiness for all eternity. But, if you lose your souls, what will it profit you to have enjoyed all the riches, honours, and amusements of this world? If you lose your souls, all is lost.”

Ligouri also reiterates the fact briefly alluded to earlier - namely that the soul, once lost, is lost forever. “But we can die only once: if the soul be lost the first time, it is lost for ever.” The race of which St. Paul talks, must be run in order to achieve the prize, which is union with God in heaven. Truly there is no other option nor ideal more worthy of ones entire zeal and energy.    Ligouri terrifyingly reveals that “the greatest torment of the damned arises from the thought of having lost their souls, and of having lost them through their own fault.”

God never permits a soul to be tried more than such a soul can handle, with the grace of God. Thus no matter the enormity of the trial which is before a soul, including the austere season of Lent, he will be able to rise to the challenge, and devote his entire energy to achieving the prize, if he but places himself in the hands of God, and relies on His grace. “You were not redeemed with corruptible things, as gold or silver, but with the precious blood of Christ, as of a lamb unspotted and undefiled.” (1 Peter 1:18-19.)

As the new season of Septuagesima thus arrives, heralding the great season of Lent, the Church and Her saints place before us these Scriptural passages, chosen so carefully. They serve as a firm, but tender warning, reminding faithful souls of the importance of the practice of the spiritual life, and the dangers which lie in becoming lazy or in falling away from pursuing the goal altogether.

With these words of Christ in one’s mind, a faithful soul is thus encouraged and emboldened to re-invigorate his spiritual life at this crucial time. “What doth it profit a man, if he gain the whole world, and suffer the loss of his own soul ?”