The Holy Name of Jesus. 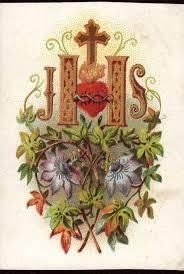 In his commentary on the text for this feast of the Holy Name of Jesus, Dom Gueranger describes how it is through the holy Name of Christ, that mankind is saved. When the Infant King descended to earth in humble surrounds, it was His name that seemed to “link earth to heaven,” writes the abbot. It was the name which the angel Gabriel told to Mary, and the name which she bore in her heart as she traversed with St. Joseph along the journey to Bethlehem. As she brought her Child to be circumcised, she presented also that Name, so that He would be known and Saviour, a light to the nations and the conquerer of death.

It is through His name that life is given and death conquered: grace imparted and sin removed. Gueranger notes that whilst in the Old Covenant, “the Name of God inspired fear and awe: nor was the honour of pronouncing it granted to all the children of Israel.” In those times, He had not yet descended to earth and become like men. Yet upon this divine arrival, so quiet and humble, His name is “expressive of love and tenderness.” The name of God Incarnate means Saviour, and it is a name “so amiable..so powerful.” It is at this name that “Every knee in heaven, on earth, and in hell, bows in adoration at hearing this Name! and yet, who can pronounce it, and not feel love spring up within his heart?”

So often in modern parlance, this holy Name is used and abused, sometimes unwittingly, sometimes deliberately, and very often as a common force of habit. How much has society changed, so that instead of giving from the proper reverence due to such a Name, it now uses His name as a common expletive, little knowing or caring about the offence given to the Almighty. Whilst the saints and Fathers wrote of the glory found in this Name, and the life which flows from It, modern society seeks to consistently trample It into the mud.

Dom Gueranger records the words of St. Bernard, drawing from a homily the saint gave on this topic. The holy abbot points his readers to the saint’s words, focusing on the grace filled wisdom of one of the canonised followers of the Infant King. “The Name of Jesus is Light, and Food, and Medicine. It is Light, when it is preached to us; it is Food, when we think upon it; it is the Medicine that soothes our pains when we invoke it. Let us say a word on each of these. Tell me, whence came there, into the whole world, so bright and sudden a light, if not from the preaching of the Name of Jesus? Was it not by the light of this Name that God called us unto his admirable Light? Wherewith being enlightened, and in this light, seeing the Light, we take these words of Paul as truly addressed to ourselves: Heretofore, you were darkness; but now, light in the Lord. (Ephesians 5:8)”

“Nor is the Name of Jesus Light only; it is also Food. Art thou not strengthened, as often as thou thinkest of this Name? What is there that so feeds the mind of him that meditates upon this Name? What is there that so restores the wearied faculties, strengthens virtue, gives vigour to good and holy habits, and fosters chastity? Every food of the soul is dry, that is not steeped in this unction; it is insipid, if it be not seasoned with this salt. If thou write, I relish not thy writing, unless I read there the Name of Jesus. If thou teach me, or converse with me, I relish not thy words, unless I hear thee say the Name of Jesus. Jesus is honey to the mouth, and music to the ear, and gladness to the heart.”

“It is also Medicine. Is anyone among you sad? Let but Jesus come into his heart, and the mouth echo him, saying Jesus! and lo! the light of that Name disperses every cloud, and brings sunshine back again. Have any of you committed sin? and is despair driving you into the snare of death? Invoke the Name of life, and life will come back to the soul. Was there ever a man, that, hearing this saving Name, could keep up that common fault of hardness of heart, or drowsiness of sluggishness, or rancour of soul, or languor of sloth? If anyone, perchance, felt that the fountain of his tears was dry, did it not gush forth more plentifully than ever, and flow more sweetly than ever, as soon as he invoked the Name of Jesus? If any of us were ever in danger, and our heart beat with fear, did not this Name of power bring us confidence and courage the moment we pronounced it? When we were tossed to and fro by perplexing doubts, did not the evidence of what was right burst on us as we called upon the Name of light? When we were discouraged, and well nigh crushed, by adversity, did not our heart take courage, when our tongue uttered the Name of help? All this is most true; for all these miseries are the sicknesses and faintings of our soul, and the Name of Jesus is our Medicine.”

Is this name treated as Light, Food and Medicine by the world today? Do men the world over recognise Its power and glory? Certainly, those three elements of light, food and medicine are a crucial aspect of daily life, but they are not the kind of which St. Bernard here speaks. Instead of His Name being the Light which illumines the life of those here on this earth, is has become a means of damnation, as huge parts of the populace use It in vain, and irreverently. Rather than giving honour to His Name, and gaining spiritual nourishment from It, the world has rejected spiritual food in favour of earthly. And instead of the Divine Name being the channel of healing grace, it has become an instrument of venting one’s anger and frustration, opening the way to yet further spiritual ailments.

Dom Gueranger has the answer to the malicious use of the Holy Name, reminding his readers of the true worth of His Name: “immortal life is to be purchased at the price of thy Death! This truth is expressed to us by thy Name, O Jesus! Savior!”

“Thou art the Vine, and thou invitest us to drink of thy delicious Wine; but the heavenly Fruit must be first unsparingly pressed in the wine-press of thy Eternal Father’s justice; we cannot drink of its juice, until it shall have been torn from the branch and bruised for our sakes. May thy sacred Name ever remind us of this sublime Mystery, and may the remembrance keep us from sin, and make us always faithful.”