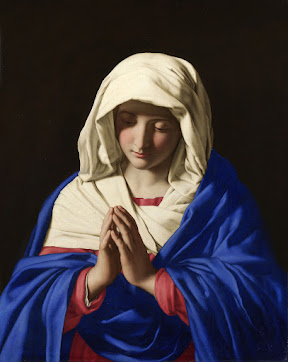 The theme of humility is spread throughout the Epistle and Gospel for this Sexagesima Sunday. St. Paul writes that "If I must boast, I will boast of the things that concern my weakness." He preaches about the glory of God shining through His creatures, warning lest man attributes to himself that which is due to the work of God. "Gladly therefore I will glory in my infirmities, that the strength of Christ may dwell in me."

This is reflected also in the parable of the sower, drawn from St. Luke's Gospel. Only that seed which fell on good ground, spread its roots and produced fruit. Such is the way in the spiritual life, as it is only those who are humble and willing to listen, who can heed the words of the Gospel. Indeed, such is the explanation of Christ Himself: "He who has ears to hear, let him hear!"

In light of this, Mater Dolorosa is reproducing the below post, first written in August of last year, concerning humility in prayer, due to its constant relevance, but particularly to the themes from today's liturgical texts.

Such passages thus accentuate the importance of humility in prayer. The Baltimore Catechism defines prayer as “the lifting up of our minds and hearts to God to adore Him, to thank Him for His benefits, to ask His forgiveness, and to beg of Him all the graces we need whether for soul or body”. (1) The first end of prayer, adoration, thus orients the importance of humility in prayer, for with true adoration necessarily comes humility. One cannot know and love God, yet remain full of self love and pride.

When seeking to be humble in our prayers, it helps to remind ourselves of the nature of prayer. Our end is union with God, and prayer is a conversation with God. Perfection is not God aligning Himself with us, but quite the opposite. Hence, in prayer we must always act in humility, seeking “the accomplishment of the divine will, and not of your own, both by the act of prayer itself and by what you desire to obtain”.(2) Humility and prayer are the antitheses of pride, since the proud soul will not submit himself to the will of God and ask for assistance. For this reason we are reminded of our need for humility at the start of Lent, with the words “remember man, that thou art dust, and unto dust thou shalt return”.(3) Christ warns us not to be like the Pharisee, but to model ourselves on the publican who came to God with the words “O God, be merciful to me a sinner”. This is also taught in the epistle of St. James: “God resisteth the proud, and giveth grace to the humble”.(James 4:6) Dare we say it, but prayer without humility, cannot be prayer at all. A proud ‘prayer’ twists reality and is the work of one who seeks to have God conform to him. On the contrary, the devout soul can never forget that we have nothing which we have not received.

St. Alphonsus teaches that the prayer of a humble soul “at once penetrates the heavens and presents itself before the throne of God, and will not depart thence till God regards it and listens to it”.(4) With humility, a soul is thus able to know itself better and consequently pray more sincerely. Just as pride is the source of all vice, humility is the opposing source of virtue. It makes the soul pleasing to God, and disposes one to hear the voice of God in the silence of the heart.

St. Bonaventure recommends three steps in gaining humility. The first step is to think upon God, the author of all creation. He has made all for Him and disposed creation so that we might come to a happy union with Him, if only we can so decide to do so. In our own strength we have not the ability to do anything, and if we seek to attribute anything to our own power then we become like Lucifer. Rather, we must attribute all to Him and nothing to ourselves but the faults of each day.

Next, we must think on Christ, who so humbled Himself to suffer and die upon the cross, the most ignoble of deaths. Through His humility was won our redemption, and it is in humility that He calls us to follow Him in the way of the cross. This life of the cross is still reviled by the world to this day, as people scorn and deride the followers of Christ. Yet just as Christ, the highest good, lowered Himself to be treated as a common criminal, the humble soul must be able to do the same and follow Him in meekness of heart.

The third step recommended by the saint is to think of oneself. By becoming familiar with our faults and failings we can readily observe just how far we have to go in order to attain to the heights of perfection. Sin has become the predominant feature in our lives yet we are called to imitate Christ in perfection. Of ourselves then we have nothing which we can be proud of. Thus, we can ask “where have we come from and where are we going?”. This question should serve to keep us away from our own prideful failings and desire to follow Christ in humility.

Our Blessed Mother is the perfect example to follow in the practice of humility. She responded to the highest honour with perfect humility. Instead of allowing herself to become filled with pride at the thought of being the Mother of God, instead she uttered the words, “Because he hath regarded the humility of his handmaid; for behold from henceforth all generations shall call me blessed”. (Luke 1:48) She is the guide and shining beacon who leads her children to her Son through the sure path of humility. Her very life can be summed up in this virtue. Close by her Son in all His life, she never sought to draw attention away from Him, but chose rather to lead others to Him. This she continues to do from her throne in Heaven and so it is to her that we can have fruitful recourse.

Humility in prayer is one of the chief marks of true prayer, nor can prayer be effective without it. In conversing with God, the humble soul is aware of his failings, the majesty of God and the awful price which Christ has paid for his redemption. He models himself thus upon Our Lady and seeks to become like her when responding to God. For in the end, what better prayers are there, than the words of Mary and the humble publican: “be it done to me according to thy word” (Luke 1:38); “O God, be merciful to me a sinner” (Luke 18:13).

4: St. Alphonsus Ligouri, The Way of Salvation and Perfection, 441.