The First Sunday of Lent - Lent as a time of hope. 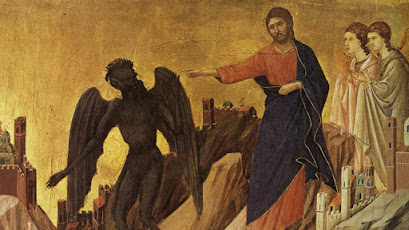 The first Sunday of Lent might perhaps bring with it the foreboding of the rigours of the season, as sacrifices and resolutions appear so weighty and unmanageable, after only a few days. Decisions concerning Lenten practices, made in the easier time before Ash Wednesday, now appear rash, and optimistic. The Church also presents a warning in Her Mass texts on this day, reacquainting Her children with the purpose and seriousness of the preparation for Easter. But accompanying that, She offers a message of hope and guidance, pointing faithful souls towards to path of salvation, through attentively drawing near to God.

In St. Matthew’s Gospel, we read of the temptation of Christ in the desert, where the devil attempts to break His resolve, goading Christ to commit sin. The Church ensures by using this text, that Her children can be under no illusions about the trials which they may undergo during the holy season of Lent, since even Her Spouse and Founder had to contend with temptings from satan. But the Church is not simply presenting the image of temptation, and then abandoning Her children to their dread at future trials. Rather, She is acting in charity, warning those faithful souls about the struggle which they must undergo, but simultaneously giving them the means to endure it.

“Then Jesus saith to him: Begone, Satan! For it is written: The Lord thy God shalt thou adore, and Him only shalt thou serve.” At the start of Lent, this passage must be read in conjunction with those found elsewhere in Matthew’s Gospel: “No man can serve two masters. For either he will hate the one, and love the other: or he will sustain the one, and despise the other. You cannot serve God and mammon.” With these two passages, the Church points to the way through Lent and through temptation - choose a master, and follow Him. Attempting to live a dual life, indulging in some aspects of the world, and some of the Christian life, does not work, as eventually either the worldly or the heavenly spirit must decide the direction of one’s life.

Lent is the chance to commit oneself to choosing and committing to the heavenly Master. In fact, it is the only way that one can hope to gain from the season, for otherwise penances and sacrifices will be meaningless, ashen and eventually hated.

But in studying the rest of the propers of today’s Mass, one is swiftly struck by how much the Church wishes to encourage Her children in devoting themselves to God in Lent. Each of the texts point to the loving attention which God shows to those who present themselves to Him, asking for His aid in following Him. “He shall cry to me, and I will hear him: I will deliver him, and I will glorify him: I will fill him with length of days,” reads the Introit, drawing from the Psalms.

“The Lord will overshadow thee with His shoulders, and under His wings thou shalt trust: His truth shall compass thee with a shield,” from the Communion.

Then also, we have the long and beautiful Tract: “He that dwelleth in the aid of the most High shall abide under the protection of the God of heaven. He shall say to the Lord: Thou art my protector and my refuge: my God, in Him will I trust. For He hath delivered me from the snare of the hunters, and from the sharp word. He will overshadow thee with His shoulders, and under His wings thou shalt trust. His truth shall compass thee with a shield: thou shalt not be afraid of the terror of the night.”

Just as he did with Christ in the desert, satan seeks to tempt all faithful souls away from the path of virtue during Lent. He accounts it a particular victory if he can discourage souls away from their chosen penance, or pious acts. The length of Lent stretching into the distance, can seem a time that is to long to endure.

And yet, as it was also with Christ, one has only to choose his master, turn to God, ask His aid, and the devil is rebuffed. Despite the machinations and temptations of the evil one, he is as nothing to the Word Incarnate. Today’s Mass is full of encouragement for souls who are as yet uncertain, fearful, or in need of encouragement that they can stay firm not only to their chosen penances, but also to the faith. “For He hath given His angels charge over thee, to keep thee in all thy ways.”

That is not to say that God does not allow faithful souls to endure sufferings or hardships. Indeed, these are the choice gifts which He bestows on those who ardently seek the pursuit of virtue. But even though such souls are beset with trials, they have the confidence that all they endure is permitted by God, who never allows them to be persecuted more than He gives them grace to bear.

In Lent and in life, if one follows the Master he has chosen, staying close to the flag which is the cross, then the devil is rejected as he was in the desert. “Because he hoped in Me I will deliver him: I will protect him, because he hath known My name.”

What then is the message the Church gives on this first Sunday in Lent? In short, She warns of the real occurrence of temptation and trials, which the devil will delight in placing before souls who seek to grow in virtue. Just as he did with Christ, so also will he do with Christ’s followers. But along with this clear warning, the Church presents the message of hope, pointing Her children to the means by which they can indeed attain to the perfection which they aim for. In choosing Christ as Master, one is given the graces to grow close to Him, to stay firm in the face of temptation, and to attain the heavenly reward. Those who place their trust in God are supported by the legions of angels He sends to assist His children in the pursuit of virtue.

Hence, Lent is a time of hope, for in choosing one Master instead of the other, one is able to imitate Christ in shouldering the cross and winning the crown of glory. “He shall cry to Me, and I will hear him: I am with him in tribulation. I will deliver him, and I will glorify him: I will fill him with length of days, and I will show him My salvation.”