Quinquagesima Sunday - 'Jesus Son of David, have mercy on me.' 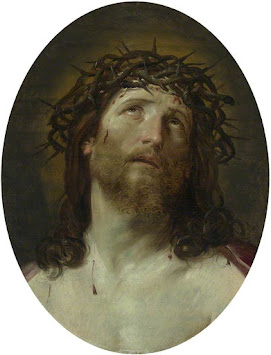 Quinquagesima Sunday - the last stop before the fullness and the rigours of Lent. With Ash Wednesday only days away, the season of Lent is imminent, and even though memories of the joy of Christmas are still fresh, Holy Mother Church calls us to begin to meditate upon the passion and death of Christ. All Her liturgy points towards Calvary, starting from the Gospel for this day in which Christ reminds His apostles of the words of the prophets, foretelling His death and resurrection.

The passage, drawn from St. Luke’s Gospel, highlights the importance of faith, while the Epistle points to charity. In describing to the twelve the details about His passion and death, Christ found that they did not understand Him. Yet later in the passage, Christ heals the blind man who calls out to Him for aid, saying that “thy faith hath made thee whole.” These words set the tone for Lent every year, but particularly so in the current global situation which sees illogical and unjust laws imposed upon innocent people, depriving them of the practice of the faith, from seeing their family, from working, or from normal daily life. In the face of such restrictions, all of which are underpinned by a subtle but relentless attack upon religion, Lent can appear to be just too much effort, at least for this year.

However, in the spiritual warfare only spiritual weapons will suffice to defeat the enemy, and as many prominent prelates and commentators have warned, the world is in the midst of a severe spiritual battle. Committing to making a good Lent, with whatever penances or extra acts of piety one chooses to do, is one of the best ways of taking an active role in the battle. Just like the apostles, who did not understand the words of Christ even though He was visibly with them, it can be hard - almost impossible, to understand why God is allowing the world to continue in this state. Yet God does not call us to necessarily understand, but to follow Him, by taking up the cross each day.

Thus, in the manner of the blind man, Catholics are called to take up the call throughout Lent: “Jesus, Son of David, have mercy on me.” Redoubling the efforts made in the spiritual life are more important in such times than ever before. Just like those around him tried to silence the blind man, many, including priests and bishops, will try to make this Lent ‘easier,’ or dissuade their flock from attending the sacraments. Perhaps they might irreverently mandate Holy Communion on the hand only, or close the churches out of fear of infection and make the Church nothing more than just another click on the computer, or another video to watch. Yet, just like the blind man, who took no notice of those around him telling him to be quiet instead of bringing him to Christ, faithful Catholics must use this Lent to ignore those who should be leading them to Christ, but are instead reneging on that sacrosanct duty.

Let this Lent be a time of ardent preparation, not just for Easter, but for the trials of the years to come. Few will understand the purpose of such a Lent, allowing it to pass by without noting the value of such a time. Others might understand it, and yet partake in the active un-bloody persecution of the faithful, by making it even harder to avail of the sacraments. Yet, a response of this kind did not deter the blind man, who “cried out much more: Son of David, have mercy on me.”

Christ highlighted the strength of the blind man’s faith, and this serves as a guide and a consolation. As a guide, it reaffirms the importance of the virtue of faith, a subject which was discussed recently on this blog. It was through his faith, that the blind man was able to approach God, earnestly desiring His help, and confident that Christ would reward such faith. Going forward into Lent and into the uncertain future, the virtue of faith should be the lifeboat which faithful Catholics cling to, in order to traverse the rough waters of persecution and hardship, in whatever form they present themselves.

But the blind man’s faith also is a consolation, for his faith was rewarded. He placed complete faith in God, and received his sight. “Receive thy sight, thy faith hath made thee whole. And immediately he saw and followed Him, glorifying God.” This is a truth which Catholics know well, but which the atheistic forces of the world attempt to hide, in order to fuel the attacks upon the faith. Faith is thus a consolation, knowing that God will not be outdone in generosity and rewards His faithful and devoted servants.

What is the purpose of thus arming oneself for the spiritual battle and deepening the spiritual life, when all around seems to be pointing towards the ineffectiveness of such measures? St. Alphonsus Ligouri, in his sermon for this Sunday, answers by pointing simply to eternity. “My brethren, it is certain and of faith that there is a hell. After judgment the just shall enjoy the eternal glory of Paradise, and sinners shall be condemned to suffer the everlasting chastisement reserved for them in hell.” No matter the achievements, the joys or sufferings, the riches enjoyed, the poverty endured, or the extreme measures taken to attempt prevention of infection from a virus - one fact is certain, namely that all must face death, sooner or later.

This thought is not born from a morbid fascination with death, but simply from truth, and hence it falls to each person to prepare his soul for death, so that he might either spend eternity in heaven with God, or in hell with the devil. With this in mind, every single time a church is closed, or a cleric refuses someone access to the sacraments, or falls prey to the unfounded fears of the world about physical health, the devil rejoices, since he knows that such actions make it harder for Catholics to practice the spiritual life and to prepare themselves for eternity.

The actions of such faithless shepherds are in the service of satan, either deliberately or accidentally. Yet along with every suffering God provides the necessary graces, and so He allows His children to endure such trials in order that they grow in virtue, and give greater glory to Him. In light of this, the words of St. Alphonsus take on renewed meaning: one must always be concerned with the salvation of his soul, as the chief and only matter of importance. There is no other cause which compares to the matter of saving one’s soul.

Hence bishops, priests and the laity alike, must ask themselves this Lent if their actions of daily life are conducive to attaining salvation?

They must ask whether every church closure, every unchallenged infringement upon the rights of the Church, or every sacrament denied, serves to bring them closer to God or satan.

They must ask whether being complicit in promoting fear, in abandoning reason and faith in God for earthly advisors, serves God or satan.

They should ask whether, in order to ease an unfounded fear, they are willing to avail of medicinal technology, developed and tested upon tissue and cells taken from innocent babies, who were cut apart whilst still alive, in order to extract the required body parts.

And in answering this, they must ask what action will bring them closer to God or to satan.

They should ask, as they contemplate benefitting from the dissection of newborn babies, if this is something which Our Blessed Mother would do, or if she would have faith in God?

Or, as they cower to the increasingly illicit and unjust dictates of faithless and godless men, who pretend to be motivated by concern for health, whilst promoting abortion, euthanasia and disregarding the health needs of millions, whether Sts. Peter and Paul would stand idly by and do such a thing?

They should ask, when the great, the ‘good,’ the powerful, their friends, neighbours, relations and loved ones, all cave to the pressure of immoral leaders and become implicit in promoting and profiting from the murder of innocents, what St. Michael would do in such an occasion.

And finally, faithful Catholics should ask, when their commitment to the faith, to the sanctity of unborn life, and to the rights and dignity of the Church, cause them to be persecuted, threatened or even put to death, (as is already the case in so many countries around the world), what would Christ do? What would the Man of sorrows do, He who died the bloody death on the cross for our salvation?

This Lent is thus an opportunity to examine such questions, and prepare oneself to be able to answer them through one’s actions in the near future.

“In this life, how great soever may be the tribulations which we suffer, there is always some relief or interruption. The damned must remain for ever in a pit of fire, always in torture, always weeping, without ever enjoying a moments repose.”