Our Lady, assumed into heaven 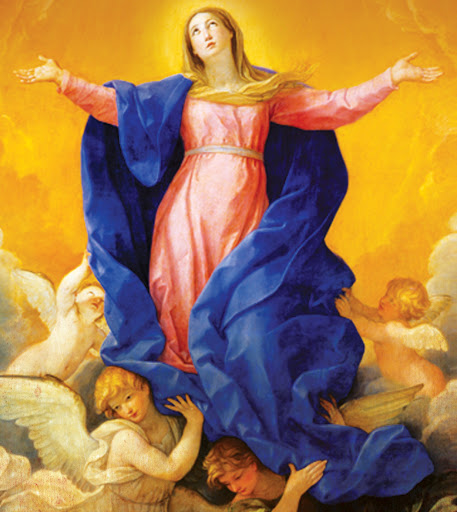 St. Alphonsus writes eloquently on this feast of the Assumption in The Glories of Mary, in which he devotes several pages to her Assumption. The saints recounts the beautiful meeting between Son and Mother upon her glorious arrival, so different from the meeting on the road to Calvary. Just as she was united with Him at every step in the Redemption, so she must also be united to Him in heavenly glory, where the two share the inestimable glory. But this glory only comes after the suffering of the cross, and they cannot be viewed as separate.

The Assumption can be seen almost as a mirror of Calvary. On Calvary Mary raised herself up in order to be beside Christ and so to share in His redemptive suffering; here she is raised up by Him to join in the heavenly throne which she has merited through her joint sufferings. Just as on Calvary Mary was able to join her sufferings to Christ’s due to having received preventative redemption, so on the Assumption she is once again able to join Him due to His power alone. Her life, even in this moment of glory, is focussed on giving honour and glory to God and leading souls to Him. “If thy sufferings have been great on earth, far greater is the glory which I have prepared for thee in heaven”.(1)

Whilst at that awful moment at the cross the entirety of creation was plunged into tumult and chaos, now the heavens resound with the exaltations of the angels who gather to welcome their Queen. Indeed, second only to God, how can they not love most of all, she who loves God most of all? Yet it is not just the angels who hail Mary as their queen and throng to lead her to her throne. The Litany of Loreto contains many invocations to her as queen: she is queen of patriarchs, prophets, apostles and martyrs. These servants of the Most High now make their way to greet she who bore their Lord and Master. The martyrs salute her: “She, by her great constancy in the sorrows of her Son’s Passion, had taught them [the martyrs], and also by her merits had obtained them strength, to lay down their lives for the faith”.(2) So do the holy patriarchs, who had awaited the coming of the Virgin Mother who would crush the head of the serpent: “O Marys, it is thou who wast our hope; for thee it was that we sighed with such ardour and for so long a time”.(3)

But the heavenly host is not yet complete, for Mary is queen also of confessors, virgins and all saints. Now they come to render homage to her, for she it was who taught them the glory of virginity and the practice of the virtues. In this their Queen, they have the perfect model of perfection, for though they are her predecessors in time, she is their mother in grace.

St. Alphonsus calls to our attention a meeting which we might overlook when meditating on the Assumption - the meeting between Mary and St. Joseph. “Who can ever describe the joy which the holy patriarch felt at seeing his spouse so triumphantly enter heaven and made Queen of Paradise?”(4) In the Scriptures, even less is heard of St. Joseph than of Mary, but one can only imagine the beatitude of their union, those two souls who were united in caring for the Infant King. The joy of the saints and angels would not compare to the joy experienced when these two blessed souls met at the throne of God.

Such a scene is that which we celebrate on this happy feast, and by doing so honour not just Mary, but her Divine Son, to whom her whole life was oriented. But what we have seen thus far is the depiction of her arrival into the realm of glory, and Ligouri urges us to continue by thinking of the glory of the throne to which she was raised. Mary’s love for her Son surpasses all imaginings. None can truly understand the depths of love which existed in her heart for her Child who was to redeem the world. Rightly so, then, should the glory of her position as Queen mirror the depths of her love. Rightly so should she be raised in a position above all and next to her Son. “Rightly, then, does the Church sing that Mary having loved God more than all the angels, the Mother of god has been exalted above them all in the heavenly kingdom”.(5)

Just as her position at the foot of the cross was seen by the world to be of the lowest rank, stood next to a criminal, her position in heaven is of the highest order. Seated next to her Divine Son, Mary thus pours out graces upon all those who ask. Her title of Mediatrix of graces is thus ever more fulfilled, as she reigns as Queen of heaven and earth.

“No other solemnity breathes, like this one, at once triumph and peace; none better answers to the enthusiasm of the many and the serenity of souls consummated in love,” writes Dom Gueranger in his comments on the feast. “She stays not till she reaches the very confines of the Divinity; close to the throne of honour where her Son, the King of ages, reigns in justice and in power; there she is proclaimed Queen, there she will reign for evermore in mercy and in goodness.”

Such are the happy thoughts which the saints give us to ponder over on the feast of the Assumption. Their love of Mary enables them to depict the heavenly scenes in such a vivid manner, that the reader can well picture himself there. Let us ask Our Lady, assumed into heaven, to grant us a greater devotion to her, so that we might one day partake of that glorious sight.

“Enter then that kingdom, and take thy seat near Me; come to receive that crown which I will bestow upon thee as Queen of the universe”.