Transfiguration of Our Lord 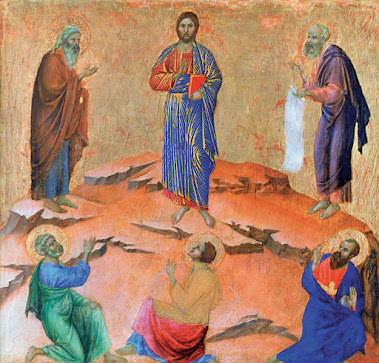 This past week has seen a number of feasts, of which one in particular stands out, namely the Transfiguration of Christ. Just as He was surrounded by the prophets of the Old Law in the moment of His Transfiguration, the feast is now surrounded by feasts of saints of the New Covenant, notably Our Lady on her feast of Our Lady of the Snows.

Dom Gueranger reminds his readers that today is not the first time in the year that the Church dwells on the Transfiguration. Hence, this feast is not just the historical event, but also an occasion to meditate on the “permanent mystery attached to it; not so much the personal favor bestowed on Simon Peter and the sons of Zebedee, as the accomplishment of the great message then entrusted to them for the Church.”

This mystery is the proclamation of the Kingdom of God, of His divine law, and Christ’s salvific death and resurrection. The select few apostles who accompanied Our Lord to the mountain top were told: “Tell the vision to no man, till the Son of man be risen from the dead.”

Thus writes Dom Gueranger on the event, explaining how it demonstrates the mission of Christ to fulfil the Old Law, and establish the New Law through the shedding of His blood:

“The King of Jews and Gentiles revealed himself upon the mountain, where his calm splendor eclipsed forevermore the lightning of Sinai: the covenant of the eternal alliance was declared, not by the promulgation of a law of servitude engraven upon stone, but by the manifestation of the Lawgiver himself, coming as Bridegroom to reign in grace and beauty over hearts. Elias and Moses, representing the prophets and the Law whereby his coming was prepared, from their different starting points, met beside him, like faithful messengers reaching their destination; they did homage to the Masters of their now finished mission, and effaced themselves before him at the voice of the Father: This is my beloved Son! Three witnesses the most trustworthy of all assisted at this solemn scene: the disciple of faith, the disciple of love, and that other son of thunder who was to be the first to seal with his blood both the faith and the love of an Apostle. By his order they kept religiously, as beseemed them, the secret of the King, until the day when the Church could be the first to receive it from their predestined lips.”

Indeed, the feast is also a call for the Church to redouble Her mission of preaching to all nations, converting and baptising. She is to preach of the glory of God, the fulfilment of the Old Law and the establishing of the New, as demonstrated in the Transfiguration.

“Although our Lord personally has now passed the torrent of suffering and entered forever into his glory, nevertheless the bright mystery of the Transfiguration will not be complete until the last of the elect, having passed through the laborious preparation at the hands of the Divine Fuller, and tasted death, has joined in the Resurrection of our adorable Head,” writes Gueranger.

“But without waiting for the day when our Savior will renew our very bodies conformable to the bright glory of his own divine Body, the mystery of the Transfiguration is wrought in our souls already here on earth. It is of the present life that St. Paul says and the Church sings today: God who commanded the light to shine out of darkness, hath shined in our hearts, to give the light of the knowledge of the glory of God, in the face of Christ Jesus. (2 Corinthians 4:6)…For thy summit is love, it is charity which towers above the other virtues, as thou towerest in gracefulness, and loftiness, and fragrance over the other mountains of Galilee, which saw Jesus passing, speaking, praying, working prodigies, but did not know him in the intimacy of the perfect. It is after six days, as the Gospel observes, and therefore in the repose of the seventh which leads to the eighth of the resurrection, that Jesus reveals himself to the privileged souls who correspond to his love.”

“The Kingdom of God is within us; when, leaving all impressions of the senses as it were asleep, we raise ourselves above the works and cares of the world by prayer, it is given us to enter with the Man-God into the cloud: there beholding the glory of the Lord with open face, as far as is compatible with our exile, we are transformed into the same image from glory to glory, as by the Spirit of the Lord. (2 Corinthians 3:18) ‘Let us then,’ cries St. Ambrose, ‘ascend the mountain, let us beseech the Word of God to show himself to us in his splendor, in his beauty; to grow strong and proceed prosperously, and reign in our souls. For behold a deep mystery! According to thy measure, the Word diminishes or grows within thee. If thou reach not that summit, high above all human thought, Wisdom will not appear to thee; the Word shows himself to thee as in a body without brightness and without glory.’ (Ambrose, in Luc. Book vii, 12).”

“All ye who seek Christ, life up your eyes to heaven; there ye may behold the token of his eternal glory.

A certain brilliance we perceive that knows no ending, sublime, noble, interminable, older than heaven and chaos.

This is the King of the Gentiles, and King of the Jewish people, who was promised to Abraham our father, and to his seed forever.

The prophets testify to him, and the Father, who testifies with them for his own witnesses, bids us hear and believe him.

O Jesus, glory be to thee who revealest thyself to little ones, with the Father and with the Holy Spirit, through everlasting ages. Amen.

Adam of St. Victor has also sung of this glorious mystery.”