Fifteenth Sunday after Pentecost: Month of the Dolours of Mary 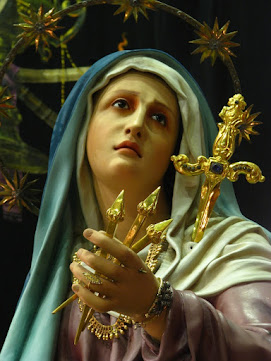 The month of September is marked by the Church’s dedication to the Dolors of Mary, the Co-Redemptrix and mediatrix of all graces. The Church offers not just the month in general, but presents the two great feasts of the Exaltation of the Cross on the 14th, and the seven sorrows of Mary on the 15th.

There is perhaps no better manner in which to suitably open the month, and prepare for these feasts, as well as for the birthday of Our Lady, than by turning to St. Alphonsus Ligouri, whose devotion to the sorrowful mother is near unmatched.

In his beautiful work, The Glories of Mary, the great Mariologist offers numerous meditations and consideration on the Blessed Virgin, as well as on each of her dolours specifically. Such pages can be taken on their own for the month of September, but he also offers a standalone homily for the dolours of Mary, which he gave during Passion Week. DUe to the dedication of this site – Mater Dolorosa – the great saints’ texts will be used considerably throughout this month, since there are few composed texts which so wonderfully portray the mystery of Mary’s sorrowful compassion with Christ.

Her martyrdom was never equalled.

“Behold we are about to consider a new kind of martyrdom; we have to consider a Mother condemned to see her innocent Son die as a malefactor on an infamous gibbet. This mother is Mary, who indeed, with too great reason, is called by the Church the Queen of Martyrs; yes, for Mary in the death of Jesus Christ suffered a more cruel martyrdom than all other martyrs.”

The words of the prophet Jeremias explain my meaning in this point: “To what shall compare thee? or to what shall I liken thee, O daughter of Jerusalem? . . . for great as the sea is thy destruction who Shall heal thee?” No, the acuteness of the sufferings of Mary are not to be compared, even with those of all the martyrs united. “The martyrdom of Mary,” says Saint Bernard, “was not caused by the executioner’s sword, but proceeded from bitter sorrow of heart.” In other martyrs torments were inflicted on the body; but Mary’s sorrow was in her heart and soul, verifying in her the prophecy of Saint Simeon, “Thy own soul O sword shall pierce.”

Arnold of Chartres writes, that “whoever had been on Mount Calvary, to witness the great sacrifice of the Immaculate Lamb, would there have beheld two great altars, the one in the body of Jesus, the other in the heart of Mary; for on that mount, when the Son sacrificed His body by death, Mary sacrificed her soul by compassion.” So much so, says Saint Antoninus, that, whereas other martyrs sacrifice their own lives, the Blessed Virgin consummated her martyrdom by sacrificing the life of her Son, a life which she loved far more than her own, and which caused her to endure a torment which exceeded all other torments ever endured by any mortal on earth.

“All the wounds,” says Saint Bonaventure, “which were scattered over the body of Jesus were united in the heart of Mary, to torment her in the Passion of her Son;” so that, as Saint Lawrence Justinian writes, “the heart of Mary, by compassion for her Son, became a mirror of His torments, in which might be seen faithfully reflected the spittings, the blows, the wounds, and all that Jesus suffered.” We can therefore say that Mary, on account of the love she bore Him, was in heart, during the Passion of her Son, struck, scourged, crowned with thorns, and nailed to the very cross of her Son.

The same Saint Lawrence considers Jesus, on His road to Calvary, with the cross on His shoulders, turning to Mary, and saying to her, “Alas, my own dear Mother, whither goest thou? what a scene wilt thou witness? Thou wilt be agonised by My sufferings, and I by thine.”

But the loving Mother would follow Him all the same, though she knew that, by being present at His death, she would have to endure a torment greater than any death. She saw that her Son carried the cross to be crucified upon it; and she also took up the cross of her sorrows, and followed her Son to be crucified with Him.

Hence Saint Bonaventure considers Mary standing by the cross of her dying Son, and asks her, saying, “O Lady, tell me where didst thou then stand--was it near the cross? No, thou wast on the cross itself, crucified with thy Son.” On the words of the Redeemer, foretold by the prophet Isaias, “I have trodden the wine-press alone, and of the Gentiles there is not a man with me,” Richard of Saint Lawrence says, “It is true, O Lord, that in the work of human redemption Thou didst suffer alone, and that there was not a man who sufficiently pitied Thee; but there was a woman with Thee, and she was Thine own Mother; she suffered in her heart all that Thou didst endure in Thy body.”

To show the sufferings endured by other martyrs, they are represented with the instruments of their torture; Saint Andrew with a cross, Saint Paul with a sword, Saint Lawrence with a gridiron; Mary is represented with her dead Son in her arms; for He alone was the instrument of her martyrdom, and compassion for Him made her the Queen of Martyrs.

Saint Bernardine of Sienna even says, that ‘“he sufferings of Mary were such, that had they been divided amongst all creatures capable of suffering, they would have caused their immediate death.” Who, then, can ever doubt that the martyrdom of Mary was without its equal, and that it exceeded the sufferings of all the martyrs; since, as Saint Antoninus says, “they suffered in the sacrifice of their own lives; but the Blessed Virgin suffered by offering the life of her Son to God, a life which she loved far more than her own.”