Sixteenth Sunday after Pentecost: The Most Holy Name of Mary 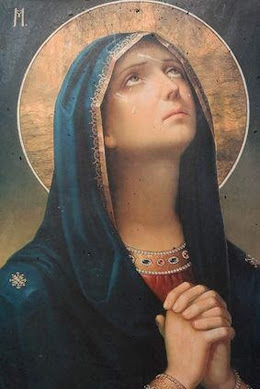 It is the name of a young virgin, devoted only to doing all things according to the will of God, and as such is a name which puts terror into demons, scatters the forces of evil and gives glory to God. Devotion to Mary is not false devotion, which is in some way misdirected, but rather devotion to she who was without sin and who humbly united her will to God’s so as to become the virgin Mother of God. “Who is she that cometh forth as the morning rising, fair as the moon, bright as the sun, terrible as an army set in array?” (Song of Solomon 6:9)

Devotion to the virgin mother is denigrated in increasing occasions in the modern age, particularly by those who wish to fling insult and injury at God. Such souls pervert the Divine order which ordains that the surest way to follow Christ is to follow His mother, and so seek to injure Him through her. Yet no matter the injury they seek to inflict, such attacks on the Blessed Virgin can never detract in any way from the glory which she rightly enjoys at the right hand of the Divine throne.

For Mary, as St. Alphonsus writes, “is more holy in the first moment of her existence than all the Saints together.” Such words are echoed by Dom Gueranger who describes the manner of her growth as a young child: “Not the holiest life, were it even of patriarchal duration, will ever attain the degree of progress made under the influence of divine power by the soul of the most pure Virgin, in these few days elapsed since her coming on earth. First, there is the progress of her intellect: not subject to the obscurity which envelopes the minds of all men at their entrance into the world, it is a faithful mirror, into which the Word of God pours floods of that light which is also life. Then the progress of love in that heart of the Virgin and the Mother, wherein the holy Spirit already delights to awake such ineffable harmonies, and to dig still deeper depths. Lastly, the progress of that victorious power, which made satan tremble at the moment of the Immaculate Conception, and which has constituted Mary the incomparable Queen of the hosts of the Lord.”

She is the Immaculate Conception and in her, sin has no hold. She, the purest of creatures, was pre-emptively redeemed by her Son, so that she might join with Him in the salvific act of redeeming mankind. Mary, the one whose name is most holy, is for us the channel of graces, and of her the Church applies the word of Ecclesiasticus 24:25 – “In me is all grace of the way and the truth.” Indeed, it is necessary that Mary be so set apart from mankind in terms of the signal graces which she received, for as St. Alphonsus notes, “otherwise how could she have interceded for all others?”

From her earliest moments, Mary’s life was one of faithful, holy and tender service to the will and love of God, so much so that many saints and theologians through the ages have suggested that she received sanctifying grace and the perfect use of her reason while in the womb of St. Anne, so that she was perfectly able to correspond to the graces which she was given.

Indeed, how could it be otherwise in she who was to bear the Son of God! How could the Holy Spirit allow His spouse to be sullied in any way, when she was to carry the Redeemer and then join Him in His acts of redemption! Well does St. Alphonsus write, that Mary thus worked from the very first moments for the glory of God and the salvation of souls. From the very beginning of her life, Mary had no desires in her heart but those which were of God.

This is the woman, then, whom Holy Mother Church calls Her children to honour and glorify, calling us to dwell upon the name of Mary, she who is without sin and joins Christ in the Redemption. In taking the Litany of Loreto, one can ably do so, examining the many graces and gifts which God has bestowed upon her and the concomitant titles under which we now have recourse to her.

Dom Gueranger also supplies this sequence in his meditation for these days following Mary’s nativity:

O holy Lady of the world, illustrious Queen of heaven! O Mary, star of the sea, Virgin Mother after God’s own heart!
Come forth, thou maiden sweet; grow verdant, thou tender little branch; for thou wilt bear the noble flower, Christ, both God and man.
Lo! we are celebrating the annual solemnity of thy birth, the day whereon, sprung from a most choice root, thou didst begin to shine upon our earth.
We who are earth-born, yet now are citizens of heaven too, have been through thee, in wondrous wise, set at peace by an honorable treaty.
Glory then and victory be ever to the Trinity, in undivided Unity, through everlasting ages.