Twenty-first Sunday after Pentecost: The reality of spiritual battle 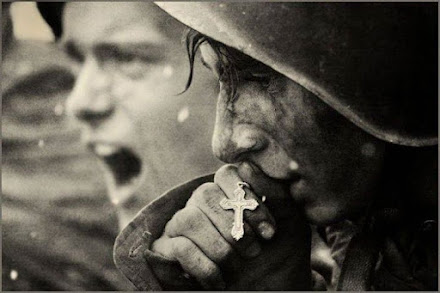 “For our wrestling is not against flesh and blood, but against the Principalities and the Powers, against the world rulers of this darkness, against the spiritual forces of wickedness on high.” The words of St. Paul’s Epistle ring true in every age, for a crisis is never one dimensional. It is never merely an earthly crisis, wherein evil men seek to accomplish their desires completely divorced from a spiritual reality. Rather the earthly and spiritual realms are interconnected, meaning that in any, and in every, earthly crisis there is a spiritual element which is to be addressed.

While various politicians and activists clamour about their respective concerns, the issue which is often ignored is the spiritual element of a particular crises. Even for those (very few) honest public figures, who recognise the crisis in society, they will often seek to solve it with legislation while ignoring the necessity for prayer, or for policy which draws society back to the moral law. Ultimately, any action which is not rooted in adherence to the law of God is destined to fail, and is like constantly attempting to cover a wound, instead of attempting to heal it instead.

Indeed, the ultimate source of catastrophe in the world comes from the disorder brought about through sin, through demonic influences, and through the fallen nature of man. Thus, in order to address any issue, a solution must be two-fold, combined of a material and a spiritual element.

Such is the message conveyed by St. Paul in his Epistle to the Ephesians, as he writes about the spiritual battle which they must be prepared to face. And while modern society, and even the modern Church, may seem less inclined to listen to the rhetoric of spiritual warfare, the facts remain that we are indeed engulfed in such a battle. Ignoring it is of no use; formulating the most intricate policy, while rejecting any spiritual solution, is also of no use. “I am the vine: you the branches: he that abideth in me, and I in him, the same beareth much fruit: for without me you can do nothing.” (John 15:5)

Part of the wiles of the forces of evil is to seek to distract souls form the spiritual reality of the current crisis, and attempt to convince people into all sorts of activities, only to disctract them from attending to the spiritual necessities of each day which play a crucial part in combatting the forces of evil. Temptations will occur that time spent in prayer is of no use, or would be better spent in other, more visibly productive activities. In short, the devil makes use of any means possible to divert souls away from paying attention to the spiritual reality, for as long as souls attempt to combat the forces of evil using only earthly weapons, then their efforts will be in vain.

Hence St. Paul writes to instruct the Church that She must be first and foremost adept with the weapons of the spiritual realm. Armed with these, the forces of evil will waste themselves upon the bulwarks of the Church, as She fights with the all-powerful weapons of God.

“Therefore, take up the armour of God, that you may be able to resist in the evil day, and stand in all things perfect. Stand, therefore, having girded your loins with truth, and having put on the breast-plate of justice, and having your feet shod with the readiness of the Gospel of peace, in all things taking up the shield of faith, with which you may be able to quench all the fiery darts of the most wicked one. And take unto you the helmet of salvation and the sword of the spirit, that is, the word of God.”

This is not to say that souls should abandon any attempt to remedy the ills of the world, and instead abandon themselves to constant prayer, but nothing else. On the contrary, the Church has the mission of preaching the Gospel, converting and saving souls, and this cannot be achieved if everyone remains reclusive in their homes, never venturing out into the world. Spiritual and temporal remedies are necessary, and while the temporal must be guided ultimately by the spiritual, it should not be disregarded.

Indeed, there have been times and may well be again, when the military style language of St. Paul is not restricted to mere allegory, but is translated in a more literal manner. Souls may well be called upon to take up arms in defense of the faith, of morality, of the Church, of the family. During the Sack of Rome in 1527, the Swiss Guard were killed down to a man in their defence of the Pope from the Masonic and Protestant forces. While God has raised up many holy martyrs whose blood is the seed of the Church, so He also raises up champions for the Church, such as those members of the Swiss Guard, so that the Church may defend Her own when the forces of evil turn against Catholics.

Consequently, the response to the evil of modernity and the crisis of the day, must always be guided by the acknowledgement of the spiritual battle which is being constantly waged. Only when this aspect is addressed can the Church, or indeed any man, hope to bring about the reordering of society in accordance with God’s law.