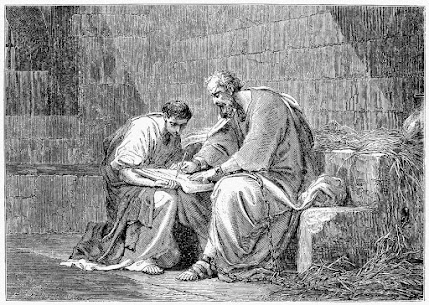 Dom Gueranger writes in his commentary for the twenty-second Sunday after Pentecost, that the Mass has references to the “days of the antichrist.” Indeed, the Epistle from St. Paul to the Philippians is written while he is in chains in his prison cell, suffering persecution for the sake of the Faith and his Lord. But despite the dire situation of the great missionary, he writes in tidings of hope, entrusting the Philippians to the renewed practice of the spiritual life.

The holy abbot, Gueranger, writes: “If, unitedly with this prophetic sense, we would apply these words practically to our own personal miseries, we must remember the Gospel we had eight days ago, and which, formerly, was the one appointed for the present Sunday. Each one of us will recognize himself in the person of the insolvent debtor, who has nothing to trust to but his master’s goodness; and in our deep humiliation, we shall exclaim, If thou, O Lord, mark iniquities, who shall endure it?”

The theme is similar in St. Alphonsus’s homily for this Sunday, in which he focuses on the torments of those who have reneged upon the practice of the spiritual life, and given themselves to other things instead.

Indeed, as the Church’s liturgical year draws to a close, She presents texts that naturally point Her children towards a meditation on death, on giving an account for one’s life, and on the fate that will await every man after death. Unlike much of the modern ecclesial spirit, St. Paul’s witness is one of militant Catholicism. His life has been given to the service of God, and for that he languishes in chains.

Yet, he writes of hope, declaring that trusting in Christ will ensure that the world cannot remove such a soul from his adherence to God. In fact, as the liturgical texts increasingly dwell on the end times, the reign of Christ the King, and the purgation of souls – all before the year recommences in Advent – the militant Catholicism of St. Paul is one which is most apt to bring about the victory of Christ the King once more.

“We are confident in the Lord Jesus that He Who has begun a good work in you will bring it to perfection until the day of Christ Jesus.” For a king is not led to a victory by supporters and soldiers who are only half-hearted, who do not care about the cause nor have faith in their leader. Nor is he crowned after simply conversing with those who wish to destroy him, instead of vanquishing such foes on the field of battle.

A king needs followers who are committed to his cause, who believe in him, and who are prepared to sacrifice themselves so that he might righteously triumph. So much more so it is required that Christ the King must have such followers who imitate St. Paul.

For this reason, as ever the liturgical texts are so apt and timely, for occurring just one week before the feast of Christ the King, and in an age where depravity and satanism is more praised that virtue, the Church calls Her children to dwell on how they are to answer when facing the judgement seat of God. She calls us to choose between following St. Paul’s model of strong, fearless Catholicism – which is the kind needed to effect the reign of Christ – or a weak, diluted imitation of religion, in which dialogue and compromise are more important than adherence to doctrine.

“And this I pray, that your charity may more and more abound in knowledge and all discernment, so that you may approve the better things, that you may be upright and without offense unto the day of Christ, filled with the fruit of justice, through Jesus Christ, to the glory and praise of God.”

These words of St. Paul are an appeal to an almost distant form of Catholicism: one in which people strove to follow Christ and bring souls to Him, instead of forming bonds of irreligious fraternity and union, without being centred on God.

Indeed, such is the command contained in the final line of the Gospel: “Render, therefore, to Caesar the things that are Caesar’s, and to God the things that are God’s.” Thus St. Paul’s witness to the defense and spread of the faith, which brought countless souls to the knowledge and practice of the faith, is placed before the Church once again, almost as a clarion call for Her children to model themselves upon him, in order to bring about the reign of Christ the King.