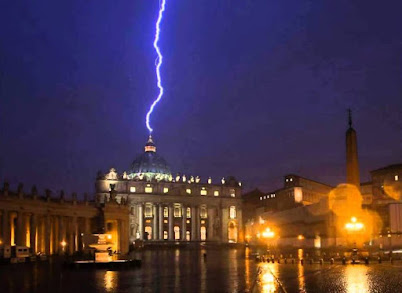 With the end of another liturgical year, it is hard not to see the current state of the world in the text of the Gospel, taken today from St. Matthew. “When you see the abomination of desolation, which was spoken of by Daniel the prophet, standing in the holy place - let him who reads understand - then let those who are in Judea flee to the mountains; and let him who is on the housetop not go down to take anything from his house; and let him who is in the field not turn back to take his cloak.”

Fears and predictions from the previous year appear to be fulfilled with every passing day, as the attack on the Church, the Faith, life, family and freedom is increased in ways which, until recently, were consigned merely to the pages of history books. History is repeating itself, while the hearts of modern man are closed to the evil they perform, or worse still, are eagerly promoting such evil with the intent of ultimately trying to wage war against God Himself.

The lines of today’s Gospel are filled with the depiction of such times, when society has turned its back so overwhelmingly against God, that widespread persecution is rampant. Indeed they serve as a reminder that Catholics are called to suffer persecution.

They highlight the very real fact that it is not always possible for Catholics to follow the dictates of the world, no matter who promotes such dictates, and that in order to remain true to God, one must resist the spread of evil in such a way that will merit him persecution.

The lines of St. Matthew’s Gospel reawaken the issue of the Church being in opposition to the forces of the world, one which is so largely forgotten by many clerics, who seek to twist and bend doctrine in order to avoid any persecution from the world. This continued surrender to the world has a knock-on effect on the Church, as these false shepherds lead souls into believing that compromise can be justified if it is to avoid suffering, or persecution.

Such shepherds, however, compromise on that which they have no right to. They compromise on the faith, on doctrine, on the sacred teachings of the Church throughout Her Tradition, and thus they lead souls away from the faithful adherence to the spiritual life. Such fake shepherds attempt to move people away from any firm devotion to the faith, in favour of a loose, flexible approach which ultimately leads to a rejection of the faith.

It is precisely this sort of false shepherding which has led many prelates in the Church to promote a policy of compliance to the rapidly spreading fascist regime which is growing in many countries around the world. Australia, Austria, Germany, Lithuania, Slovakia, Malaysia, Philippines, the Czech Republic are all segregating swathes of society in a manner which until a few years ago, was known only as a memory from the times of the Nazis.

Now, in name of health and of ‘saving freedom,’ the Nazis have returned, and filled with the abject spirit of compliance, of cowardice, and lack of faith, false shepherds have stood by and done nothing to protest this. Even worse, many modern prelates and clergy have been the most ardent advocates of the medical tyranny, dividing their flock based on ‘vaccination’ status, and showing such wanton lack of faith as to appear to have lost it altogether.

Faced with such a reality, it is timely to turn to Dom Gueranger’s commentary on this Gospel.

“O Jesus! who then art to come to deliver thy Church, and avenge that God who has so long borne every sort of insult from his creature man, that day of thy coming will indeed be terrible to the sinner! He will then understand, how the Lord hath made all things for himself, all, even the ungodly, who, on the evil day, is to show forth the divine justice. (Proverbs 16:4)”

The saintly abbott describes the final triumph of Christ the King over the forces of evil, offering words of consolation and hope for those sore afflicted by their persecutors.

“The trumpet of the Archangel, which will ring through the graves of the just, is to be a summons calling them, not to death, but to life; to the sight of the old enemy’s destruction; (1 Corinthians 15:28) to a redemption, which is to include their very bodies; (Romans 8:23) to the unimpeded passover to the true Land of promise; in a word, to the Pasch, and, this time, quite real, and for all, and forever. What will not be the joy of that true Day of the Lord! (Psalm 117:24) What joy for them that have, by faith, lived in Christ, and loved him without seeing Him! (1 Peter 1:8) Identifying themselves with thee, O Jesus, notwithstanding the weakness of the flesh, they have continued here below, thy life of suffering and humiliation: what a triumph, when, delivered forever from sin, and vested in their immortal bodies, they shall be borne aloft before thy face, that they may forever be with thee! (1 Thessalonians 4:6)

O sweet Jesus, detach us, every Year, more and more from this world, whose fashion passeth away, (1 Corinthians 7:31) with its vain toils, its false glories, and its lying pleasures. It was thine own foretelling, that, as in the days of Noe, and Sodom, men will go on with their feasting, and business, and amusements, without giving any more thought to thy approaching Coming, than their forefathers heeded the threat of the Deluge, or of the fire, which came upon them and destroyed them. (Luke 17:26-30) Let these men go on with their merrymaking, and their sending gifts one to the other, as thine Apocalypse expresses it, because, so they will have it, Christ and his Church are then to be worn-out ideas! (Apocalypse 9:10) Whilst they are tyrannizing over thy holy City in a thousand varied ways, and persecuting her as no past period had ever done, they little think that all this is an announcement of the Eternal Nuptials, which are nigh at hand. All these trials were the fresh jewels, which the Bride was to have on her before all her beauty was complete; and the blood of her last Martyrs was to incarnadine her already splendid robes with all the richness of royal crimson. As for us, we lend an ear to the echoes of our home above; and, from the throne of our God, we hear going forth the voice heard by thy beloved Prophet of Patmos: Give praise unto our God, all ye his servants, and ye that fear him, little and great! Alleluia! For the Lord our God the almighty hath reigned! Let us be glad and rejoice, and give glory unto him; for the Marriage of the Lamb is come, and his Wife hath prepared herself! (Apocalypse 19:5-7) Yet a little while, till the number of our brethren be made up; (Apocalypse 6:11) and then, with the Spirit and the Bride, we will say to thee, in all the ardor of our souls that have long thirsted after thee: Come, Lord Jesus! (Apocalypse 22:17) Come, and perfect us in love, by Union eternal, unto the glory of the Father, and of thyself the Son, and of the Holy Ghost, forever and ever!