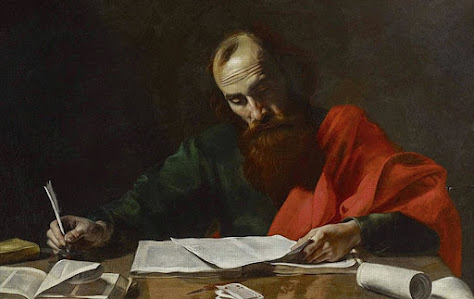 St. Paul’s Epistle to the Thessalonians, which is used in today’s Mass in the transferred readings from the Sixth Sunday after Epiphany, highlights many truths of the Catholic life which are much forgotten in more recent times. Writing to his spiritual children, the great Apostle outlines elements which are integral to the proper living out of the Christian life in accord with the precepts of God, as taught by the Apostles.

His opening line is a teaching on the necessity of prayer for other members of the Church as he writes how the Thessalonians are “continually” remembered in his prayers. In a time where prayer is often put at the end of the long list of social actions which Church leaders propose for the members of the Church, St. Paul’s words are in stark contrast to this modern practice. His priority is first and foremost give to prayer.

But having noted this anchor of the spiritual life, he describes succinctly the aspects which punctuate this life: “being mindful before God our Father of your work of faith, and labour, and charity, and your enduring hope in our Lord Jesus Christ.” The life of a Catholic is thus summarised in the four words – faith, labour, charity, and hope. These marks of the Catholic life, as taught by St. Paul, are not merely empty proscribing without any basis in reality, but are in fact drawn from his own life of service to God as exemplified in his pursuit of souls. He teaches only what he has been taught himself, and that which he practiced in all his missionary endeavours.

For what is the Catholic life without faith, but empty and hollow. A life without labour, without putting such faith into effect – and often in difficulties – is one which does not respond to the call to take up one’s cross daily. A life without charity is the death of the spiritual life. And a life without hope, means that one denies the omnipotence of God, and believes his own failings to be greater than God. So it is, therefore, that St. Paul earnestly recommends these four essential aspects of the spiritual life as aspects to be practiced by every Catholic.

But he notes how the Thessalonians did not have to merely trust the words of St. Paul without seeing any fruits, or supporting evidence. Such would be contrary to the Catholic faith, for it is not a belief system based on the words of mere men. It is first and foremost spread and taught by Christ, the Second Person of the Holy Trinity, who sent the Third Person to guide the Church upon His ascent into Heaven. This is the reminder which the Apostle gives, noting that the faith was taught not just in words, but evidenced by the power of God through the Holy Spirit. “For our Gospel was not delivered to you in word only, but in power also, and in the Holy Spirit, and in much fullness, as indeed you know what manner of men we have been among you for your sakes.”

Having first outlined the essential elements of the spiritual life – faith, labour, charity, hope – as well as denoting the authority which teaches this life – God Himself – St. Paul then notes the next aspect of the Catholic life: namely, imitation of God and of the saints. The Church points us always towards the life of Christ, and in the centuries following His wondrous life on earth, She has raised to the glory of the altars many canonised saints who also serve as guides and examples in the way of perfection. St. Paul calls all members of the Church to heed this, to imitate not just the teachers of the faith, and not just the saints, but to imitate Christ Himself. “And you became imitators of us and of the Lord, receiving the word in great tribulation, with joy of the Holy Spirit, so that you became a pattern to all the believers in Macedonia and in Achaia.”

An important aspect to note, is the saint’s choice of wording: “receiving the word in great tribulation.” St. Paul’s own life was beset by hardships and persecutions due to his promotion and defence of the faith. He does not counsel his spiritual children that the Catholic life will be easy, nor without hardships. On the contrary, he specifically warns how faithful adherence to the word of God will result in tribulations, as the three-fold attack from the world, the flesh and the devil will seek to turn souls from their Heavenly goal.

But, once again drawing from his own testimony, these tribulations will not be unconquerable, for God does not try His children more than He gives them assistance to deal with. St. Paul notes this, adding that tribulation is accompanied by the “joy of the Holy Spirit,” so that the members of the Church can persevere in their pursuit of Heaven undeterred.

Finally, he reminds the Church of one of the final commands Christ gave: the precept to go out to teach and baptise the nations. St. Paul highlights how the Thessalonians have “spread abroad” the “word of the Lord,” so that the Church might constantly be filled with new converts, souls desirous of attaining union with God after having been taught the truths of the faith.

In these few short lines, the great Apostle thus gives a breakdown of the essential elements of the Catholic life, as exemplified by the Thessalonians and held up today as a guide for the Church. He writes firmly, but always appealing to the unfathomable love of God to guide His children in their path to Heaven.