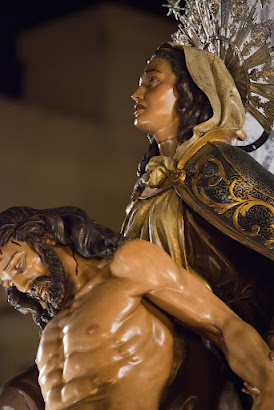 For in fact Mary’s true spiritual maternity is linked to her Divine maternity, to her role in the Redemption, particularly by the cross on Calvary. Just as life, the spiritual rebirth, came from Christ’s death on the cross, Mary – the mediatrix of graces – is intimately linked to this life giving act, so that she is truly a spiritual mother. “She must associate herself with Christ precisely in the act or acts which produce life,” notes Fr. Sebastian.

These acts are of course the Incarnation and the life-giving death of Calvary. “At the Incarnation, in virtue of her Divine maternity, she conceives us to the supernatural life, whereas on Calvary she begets us.” Her motherhood, demonstrated at the foot of the cross, is thus not merely allegorical, but real. St. Alphonsus already notes how Mary is both mother and type of the Church, and Fr. Sebastian builds on this by explaining how just as a mother gives birth to her children, Mary is intrinsically involved in the spiritual re-generation occurring at the cross.

Not, of course, that Mary takes precedence or removes anything from Christ, for as Co-Redemptrix she co-operates with but subordinate to her Son in the act of redemption. “As Mary’s Divine maternity depends in its existence, nature, and transcendence on the Hypostatic Union, so does her spiritual maternity depends on Christs’ grace of Headship.”

Fr. Sebastian further defends the true nature of Mary’s spiritual maternity, by explaining that just as earthly mothers impart something of themselves to their children, so does Mary by her spiritual maternity. Mary transmits to her children the graces which she receives at the hands of Christ and which she won with Him, on Calvary. As the mediatrix of graces, Mary pours out the life which has been won for mankind, she who is both full of grace herself and the Co-operator in the work of Redemption.

“We may therefore conclude that the spiritual maternity consists formally in Mary’s plenitude of grace and in her Co-Redemption. That is why theologians commonly say that she conceived us at Nazareth and bore us on Calvary,” concludes Fr. Sebastian.