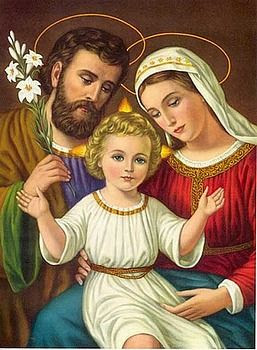 Christmas is spent heavily devoted to the beautiful teaching and images of the nativity and of Mary’s Divine motherhood, and following on from the passage of the wedding at Cana used by the Church last Sunday, the saints and theologians take particular effort to expand on Mary’s role as spiritual mother of the Church. St. Alphonsus Ligouri, writing on the wedding at Cana, further notes how Mary is “called the salvation of all who invoke her aid.”

For her turning to her Son at the wedding shows her role of a mother: firstly the mother of Christ but also as mother of the Church, who cares for her children and wishes them to receive the ultimate good – union with God.

In his work The Glories of Mary, Ligouri writes that Mary’s love for her children is intensified through her love for Christ, since He entrusted her to us, and us to her. “Our mother loves us much, because we were recommended to her by her beloved Jesus, when He before expiring said to her, ‘Woman behold they son’, for we were all represented in the person of St. John.”

St. Alphonsus notes how some of these final words of Christ were those entrusting Mary to the Church, both as mother and type. Indeed just as a mother brings forth life into the world, Mary as the Mediatrix of graces, is the channel of life. “It was then by this great offering of Mary that we were born to the life of grace; we are therefore her very dear children, since we cost her so great suffering.”

Mary’s love for man is above all rooted in Christ. It is also directed towards Him, since the love she has for the Church is that her children will imitate Christ. As such, this is one of the reasons why her love cannot fail, since it is perfectly united to the desire of her Son for all to take up the cross and follow Him. Indeed, Ligouri teaches that “in us, [Mary] behold that which has been purchased at the price of the death of Jesus Christ.” Her love is thus increased, if possible, since “she has seen that we are valued to such a degree by her Son, that He did not disdain to purchase us at such a cost.”

These words are supported by the writings of Fr. Neubert, in his seminal but almost forgotten work Mary in Doctrine. Fr. Neubert notes has Mary’s spiritual maternity is in fact intrinsically linked to her Divine maternity, for one cannot be separated from the other. “God did not decide by one decrees that His Son was the become the Son of Mary, and the by another decree, that He would become head of mankind, head of this Mystical Body which we form together with Him.” Rather, Mary is the mother of the “whole Christ,” according to Neubert’s phrase, meaning that “bearing Jesus in her womb, Mary also bore there all those whose life was included in that of the Saviour.”

“Jesus took natural life from Mary in order to be able to make us live a supernatural life; and Mary became the natural Mother of Jesus in order to become our supernatural Mother.” Indeed, the spiritual maternity of Mary is not something simply entrusted to her at a specific point in time, Neubert teaches, but rather something much deeper: “it is a reality bound up with the whole mission, the entire raison d’être of the Blessed Virgin.”

Drawing parallels to natural motherhood, Fr. Neubert designates three moments in “our supernatural birth” which he outlines for further meditation.

Firstly, drawing from the teaching of Pope Pius X, Mary “conceives us at Nazareth….for without the Incarnation we would all still be buried in the death of sin. But it was in Mary that God accomplished the Incarnation.”

Secondly, Neubert teaches that Mary “brings us forth on Calvary” as the “mystery of the Incarnation is completed by that of the Redemption.” Due to Mary’s co-operation in the act of Redemption he spiritual motherhood “which began in the first mystery [Annunciation and Incarnation] was completed in the second.”

Thirdly, Mary “causes each soul to live by obtaining grace for it.” For Mary’s motherhood did not cease on Calvary, but continues to this day. “Mary continues her mission of Co-Redemptrix in heaven by distributing now to each soul in particular the graces she helped merit for all souls in general.”

Hence Neubert echoes St. Alphonsus in writing that “by her threefold co-operation in the Incarnation, the Redemption, and the distribution of grace –a co-operation which is indeed threefold in time, but only one in intention – she has truly given us supernatural life, and she has as truly co-operated in our birth as children of God, just as our earthly mothers have contributed to our birth as children of Adam.”