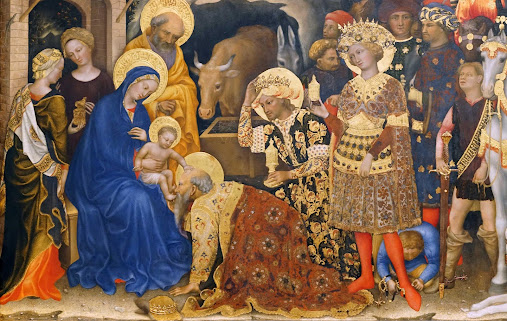 In his writings for the Sunday following the Epiphany, Dom Gueranger notes how the Church points to the kingship of Christ in the texts used at today’s Mass. “It is the Kingship of the divine Infant that the Church again proclaims in the opening Canticle of the Mass for the Sunday within the Octave of the Epiphany. She sings the praises of her Emmanuel’s Throne, and takes her part with the Angels who hymn the glory of Jesus’ eternal Empire. Let us do the same, and adore the King of Ages, in his Epiphany.”

By doing so, the Church repeats the wondrous teaching of Christ as King. The little babe, who received homage from kings on the feast of the Epiphany, is truly the King of kings with glory and splendour unrivalled. As such, His wisdom and mastery of the sacred texts is demonstrated in the passage from St. Luke’s Gospel, which recounts the Christ schooling the elders in the temple, whilst still only a boy. This King of kings, whom even at his birth received homage from earthly princes arrived from far-off lands, is now shown to be full of wisdom above the elders and doctors.

Dom Gueranger writes thus: “Thus, O Jesus! didst thou come down from heaven to teach us. The tender age of Childhood, which thou didst take upon thyself, is no hindrance to the ardour of thy desire that we should know the one only God, who made all things, and thee, his Son, whom he sent to us. When laid in the Crib, thou didst instruct the Shepherds by a mere look; when swathed in thy humble swaddling-clothes, and subjected to the voluntary silence thou hadst imposed on thyself, thou didst reveal to the Magi the light they sought in following the Star. When twelve years old, thou explainest to the Doctors of Israel the Scriptures which bear testimony to thee. Thou gradually dispellest the shadows of the Law by thy presence and thy words.”

St. Luke’s text also presents a rare glimpse into the life of the Holy Family, though, which highlights another aspect of this King without equal: namely that despite his glory, the boy Christ humbles Himself to submit to the directives of Mary and St. Joseph. He obeys their call to return with them, and submitted to their instructions: “And He went down with them and came to Nazareth, and was subject to them.” Such royal behaviour is that which the world does not recognise, for Christ came not in great pomp and splendour into a palace, but into a stable filled with straw.

But Gueranger further notes how this early part of Christ’s mission is inter-twined with one of the seven sorrows of Mary. For in staying to instruct the elders, He left her company and she endured the sorrow of searching for her Son. “In order to fulfil the commands of thy heavenly Father, thou dost not hesitate to occasion sorrow to the heart of thy Mother, by thus going in quest of souls that need enlightening,” comments the abbott.

“Thy love of man will pierce that tender Heart of Mary with a still sharper sword, when she shall behold thee hanging on the Cross, and expiring in the midst of cruelest pain. Blessed be thou, sweet Jesus, in these first Mysteries of thine Infancy, wherein thou already showest thyself devoted to us, and leaving the company of thy Blessed Mother for that of sinful men, who will one day conspire thy death.”

Thus the Mass texts note how Mary, as the sorrowful mother, is intimately linked with the kingship of Christ, and how His humility and her sorrows are an integral part of the Divine rule which He establishes.