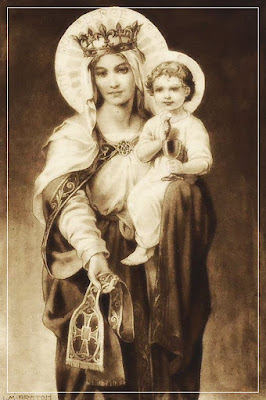 It would be very remiss if the month of May passed by without some special attention to Mary! Mariology is one of the most beautiful elements of study in the Church today. That which concerns Mary is linked directly to God, for she is the Mother of God and can only lead her children to Him. Devotion to her constitutes devotion and love for her Divine Son. The subject of Marian typology is one very interesting way of coming to know Mary in a closer way, by examining the correlation between Old Testament figures and the Mother of God. So rich is the text that the true difficulty is in deciding which aspects of the topic to deal with in this short work. Rather than give a broad overview of Marian typology, we shall turn attention to some of those types which are most interesting and beautiful: those in the story of Abraham, the Ark of the Covenant and the role of the queen mother.

Mary and Abraham.
The types of Mary are not merely confined to the great Biblical women, for even in Abraham can a pre-figurement be seen of Mary. The story of Abraham starts with his very dramatic calling by God. He receives his vocation, is then ordered to leave the security of his homeland and journey far into a land unknown, which will be revealed to him by God. “Leave your country, your family and your father’s house, for the land I will show you.” (Gen 12:1) A calling from familiar security into the wild unknown. Almost as a sign of His almighty power and as a reward for obeying the Divine will, God promises to Abraham that his name will be a blessing for ages to come. “All the tribes of the earth shall bless themselves by you.” (Gen 12:3) On every step of his journey, Abraham built an altar to the Lord, humbly surrendering his own will to God’s.
This action is almost identical to Mary’s on the occasion of her Annunciation. Upon receiving the message of God she accepted the will of God without hesitation, fully aware of the awful responsibility which she was undertaking. It was a calling from the peaceful and prayerful life which Mary was leading, to an honour as exalted as it was painful and sacrificial in its nature. As Mother of God she was to partake in Christ’s every sorrow and pain, to suffer the most unimaginable torment as she watched her Son be tortured through sin and its effects, culminating in the agony of Christ’s crucifixion. This sacrificial action was undertaken by both Mother and Son, as Christ himself expressed to St Bridget, “My Mother and I saved man as with one Heart only, I by suffering in my Heart and My Flesh, she by the sorrow and love of her Heart.”(1) All this, Mary knew when she uttered her “Fiat”, surrendering completely, as did Abraham, to the will of Almighty God. As a result of her acceptance, Mary became “blessed .. among women” (Luke 1:28)
Just as through Abraham, “all the kindred of the earth be blessed” (Gen 12:3) so also the whole of creation shall “call me blessed” (Luke 1: 48). The blessing bestowed on the world through the obedience of Abraham, is like that bestowed on the world through Mary. The blessing which stems from Mary is God Himself, and it is for this reason that we honour her as blessed.
Another interesting image of Mary can be found in the journey that Abraham undertook to reach the promised land. Having accepted the will of God, he had to test his patience as he travelled to attain the great land that God had spoken of. Abraham had to rely completely on the Divine will. So also does Mary await patiently, for nine months, the coming of her child who is to be the Messiah. Her mission began whilst at prayer, and it is in this state which she continues, whilst also visiting her cousin Elizabeth to assist that noble woman in her own pregnancy.
Sarai was the wife of Abraham, a woman free born, unlike her maid-servant Hagar. Whilst Abraham did originally have a son with Hagar, it was Sarai’s child, the child of a free woman, who bore Isaac, father of a great nation and himself a type of Jesus. Mary Immaculately conceived, is free from any slavery to sin, for “whosever committeth sin, is the servant of sin.” (John 8:34) As the only human free from sin, it is thus she who is the Mother of Christ, the Head of the Mystical Body.
In order to put Abraham to the test, God ordered that Abraham should sacrifice his only son, whom the aged man had awaited for so long. Such a dreadful task Abraham undertook, leading Isaac up to the place of sacrifice, “they two went on together” (Gen 22:6) He put aside his earthly feelings, trusting in God. This heartrending offering is a clear pre-figuring of the actions of Mary, as she accompanied her Son on the way to the cross, and “stood by the cross of Jesus” (John 19:25) as He gave His life in expiation for the sins of man. Mary knew the sacrifice which was asked of her and her Son, but also why Christ’s death was necessary.

Mary, the ark of the Covenant.
The ark of the covenant is one of the most striking prototypes of Mary in the Old Testament. It was the precious tabernacle, in which the Israelites place their most sacred objects, treasures of the faith, gifts directly from God who had Himself given the exact descriptions of the Ark. “Make me a sanctuary and I will dwell in the midst of them. According to all the likeness of the tabernacle which I will shew thee.” (Ex 25: 8-9) It’s construction was of the finest materials, “gold, silver and brass….violet skins, and setim wood.” (Ex 25: 3,5) The setim tree was a rare plant, which grew in the wilderness and was “imperishable wood”.(2) Thus the ark, was designed by God to the most minute details, (Ex 25: 3-40) made from the most immaculate of woods and “plated with gold inside and out.”(3) It was topped by a “golden crown round about” and inside lay the “testimony which I will give thee.” (Ex 25: 11,16) This dazzling glory was to be the dwelling place of God, marked by the “pillar of cloud” (Ex 33: 9) wherein dwelt the Lord.
Mary is such an ark. She was preserved from the dawn of time from any taint of sin which might mark her soul. Her soul was spotless and shining before God having “never suffered the deprivation of grace” embodied with the “fullness of grace [which] enable her to choose the good and the right every day of her life.”(4) The gems and precious metals of which the ark was composed, were all symbols of the gem of her spotless soul for according to the Church fathers Mary’s perfect virginity and fullness of grace are prefigured by the ark of the covenant. She bore the Christ child in her immaculate womb for nine months, and tended Him for the rest of His years. Mary is the Mother of God, a title which “resumes and includes everything.”(5) God so ordered every detail about His Blessed Mother so that she would be perfect, in the same manner that He ordered the construction of the ark. Her submission to the Divine will was of course much greater and far more pleasing to God, than the fineries which lined the ark.
Inside the ark lay the written word of God, as given to Moses upon the tablets of stone. The virginal womb of Mary was the dwelling place of the Word, “and the Word was God.” (John 1:1) She is the living temple of the Word the Ark of the New covenant.
The Israelites were also bidden to construct “a propitiatory of the purest gold” from which God would talk to His people and from “thence will I give orders, and will speak to thee.” (Ex 25:17,22) The Spirit of God came down over this ark “covering all things and the majesty of the Lord shining.” (Ex 40: 33) The use of the word “covering” is especially important for it denotes a direct link with Mary. In the gospel of Luke, one reads of how the “power of the most High shall overshadow thee. And therefore else the Holy which shall be born of thee shall be called the Son of God.” (Luke 1: 35) The Spirit of God came upon the ark in the Old Testament just as it came upon Mary who was to be the Ark of the New Testament. St Luke was aware of this prefiguring and would have been also fully conscious of the connections which his readers would make with the text of Exodus.
God gave the ark to His people after their flight from Egypt, after they had endured the trial and persecutions in that land. From that moment on, the ark was at the centre of the Old Testament, and the Jews guarded it with their very lives. When the ark was with them they were successful in battle, and when they disregarded it, they felt the wrath of God. In a like manner God gives us His mother, who is not only the Mother of God as declared at Ephesus in 431 A.D, but is “in the order of grace, the mother of all believers…our mother.”(6) At the height of His sufferings on the cross, Christ looked down to earth and gave His mother to us. She has ever since guided the Church will all her motherly attributes, encouraging and praying with the terrified apostles in the upper room on the feast of Pentecost. If we stay close to Mary then we are by default close to God, who is her Son and Saviour.
Mary, the Queen Mother.
The role of the queen mothers throughout the entirety of the Old Testament is a true foreshadowing of the role of Mary as Mediator and Advocate in our vale of tears. The queen mother had a special privilege in the courts of the ancient kings, as seen in the court of Solomon. “A throne was set for the king’s mother, and she sat on his right hand.” (1 Kings 2:19) She was also the counsellor to the king as seen in the book of Proverbs, chapter 31. Should any misfortune befall the king, it fell to the queen mother to act as regent, to guide the country through the turmoil. Mary undertakes this role as befits the Mother of God, and Mother of the Church. As Miravalle states in his work, “it is Mary of Nazareth who becomes the Queen and Mother in the Kingdom of God, as the Mother of Christ, King of all nations.”(7) At the cross, Mary took the Church under her protection, much as one would care for a child lost without its parents. The accounts of the Old Testament provided the early Christians with the insight necessary to recognise Mary’s position in the Church, indeed they readily welcomed her as their Mother.