The value of suffering. 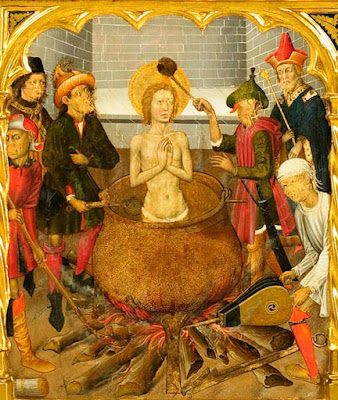 The traditional calendar celebrated yesterday the feast of St. John before the Latin Gate. St. John the Evangelist is ranked amongst the martyrs, due to the horrific torture and attempted death which were inflicted upon him by order of the emperor Domitian. Dom Gueranger recounts that it was this day upon which the beloved disciple offered his life for Christ, who so miraculously spared him from the cauldron of boiling oil. Enraged, the emperor banished the saint to the island of Patmos to live the rest of his days in exile. The saintly commentator mentions that we should not be surprised at this miracle, since was not St. John the only one who remained with Mary at the foot of the cross? Was it not to him that Christ gave His Blessed Mother also?
Pondering on this account, no doubt familiar to many, can give occasion to a very profitable meditation upon suffering and its benefits. St. John was keenly aware of the worthlessness of this life and its comforts in comparison to union with God, hence why he is mentioned as rejoicing at the sight of the instruments of his martyrdom. Having seen His Saviour crucified on Calvary, the beloved disciple was especially aware of the glory and great graces which can be won through dying for Christ. Nor should we expect that he was unaffected by the perfect act of love and suffering by which Mary united herself to Christ on the cross: an act of love which he beheld with his own eyes. These two souls, one the Mother of God and the other Christ’s beloved disciple, serve as models for us in the way of sacrificial love of God.
The Catholic life is one of suffering out of love for God. It is with this in mind that St. Louis de Montfort wrote his beautiful letter to ‘The Friends of the Cross’ and counsels that walking the royal road of the cross is the surest way to imitate St. John in his pure and ardent love of God. The spiritual life, especially the purgative way, ie. that of beginners, is a true way of the cross, for it is centred upon, oriented to and nourished by the cross. It is our prerogative to join our Saviour upon those beams, offering ourselves with Him, in Him and for Him.
Yet fear of suffering is perhaps the greatest obstacle to our advancement in the spiritual life and is one of the chief objections which critics of the faith have. In the eyes of the world, suffering is the greatest evil that exists, and the concept of willingly suffering for the sake of God is one which can rarely be understood.

What place then, does suffering have in the spiritual life? How can we seek to answer the critics who might view the Catholic faith as having a bizarre fixation with suffering?
Firstly, Christ died upon the cross for our sins and did so out of the most perfect love. He died innocent of all guilt, yet we have trouble passing through even one day without committing at least one or two (at least minor) sins. Each sin is an infinite offence against almighty God, a rejection of His goodness and a desire contrary to the eternal law. In light of our sins alone, we merit the sufferings of this world for the offence which we have caused to God. Indeed, it is as a result of the very first sin that we have sorrows and hardships, to serve as a reminder and a punishment for man’s infidelity to God.
When we endure tribulations, we are reminded of the fleeting nature of this world and that it is only in union with God that true happiness is to be found. Without such trials we might easily become attached to the pleasures of this world, which are all too often bought and enjoyed at the price of our salvation. Yet only Christ is the Good Shepherd, the careful guardian of His sheep, who can offer the food of eternal life.
But there are other positive aspects of suffering, whereby we can merit graces and atone for our sins through the patient bearing of trials. The path of the cross, the path of suffering, allows us to join ourselves to Christ’s sacrifice, for each mortification or cross we receive from God is in fact “the greatest gift of heaven, the greatest gift of God”. (1) St. John recognised this fact, when he rejoiced at the thought of impending death, for it gave him the chance to demonstrate his love for God and to sacrifice all for love of Him.
As mentioned recently, we preach Christ crucified and the Catholic faith is one centred upon the cross. Life and grace come through the cross; it is the image found in our homes and churches, serving to remind us of the import which it must have in daily life. Fr. Boudon declares that, “to be a Christian and to be crucified is one and the same thing. If you renounce suffering, you must renounce Christianity”. (2) These crosses call us to accept the call of Christ, namely to take up our cross and follow Him.
But we can go further than this, because if we view sufferings and the way of the cross as merely things to be endured out of love for Christ, then we still approach this fundamental aspect of spirituality through the eyes of the world. When we view the cross in earthly eyes we can see nothing but detriment to ourselves, yet the saints teach that in the eyes of God, each moment spent on the road of the cross is glorious beyond words. To put it quite simply, Christ gave His very life for us; how can we be so proud as to believe that we can do any less for Him? He has even consoled us already, stating that “My yoke is sweet and my burden light”. (Matt 11:30) When reading the lives of the saints, one striking point is their understanding of suffering; they knew suffering was not a mere trial which they simply endured, but it was a supreme honour by which they could imitate and compassionate Christ. This ought to serve as pious motivation for joyfully accepting and even longing for suffering, as a chance to unite ourselves with Christ.
Dom Marmion composes a similiar meditation for this feast, in which he writes on the joyful acceptance of trials. The holy abbot draws from the Gospel of the day, stating that “we cannot reach perfect union with Christ Jesus unless we accept that portion of the chalice which Our Lord wills us to drink with Him and after Him”. (3) Christ knew of the sufferings which He was to undergo, and yet took up the cross with love and zeal. It is this kind of love of suffering to which He calls us also.
Such is the lesson which we can draw from the feast of St. John before the Latin Gate. The beloved disciple serves as a model for faithful and holy suffering. He drank the chalice which was proffered to him and so calls us to partake of the chalice of suffering which Christ offers to each of us. Uniting sufferings to Christ, through Him, with Him and in Him, is one of the most beautiful mysteries of the faith and which is only understand by devotion to Christ crucified.