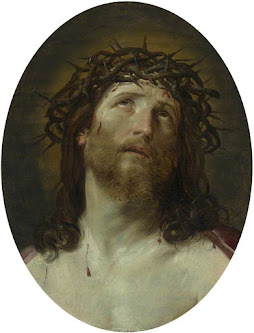 “Why do you think evil in your hearts? Whether is easier to say, Thy sins are forgiven thee: or to say, Arise and walk?” With these words, the scribes are rebuked by Christ in St. Matthew’s Gospel. The Saviour utters these words in response to their incredulity and scorn when He forgives the sick man’s sins. ‘Nay,’ they have murmured, ‘who can forgive sins? Who does this man think he is? What foolishness this is.’ But in order so that even their hardened hearts might be touched, Christ then performs a more visible sign, curing the man of his physical ailments.

The question which He poses to the scornful scribes is one which tests their faith. They are confronted with the supernatural power of God, healing both physical and, more importantly, spiritual ailments. Yet in the face of God Incarnate performing such wonders, they still state “He blasphemeth”. Is it not ironic, that they had waited so long for the Messiah to come and deliver them, yet when He stood before them and delivered souls from sins, they recognised Him not? How then is it, that the scribes could not see what was before them when the multitude went away glorifying God? It is a question of faith.

Throughout the Gospels, it is chiefly the pharisees, scribes and the chief priests who are the enemies of Christ: those who had positions of authority and leadership. Their knowledge of Scripture and the Law was far greater than the majority of those who flocked to Christ, yet despite this knowledge they could not, or would not, acknowledge Truth Incarnate. Is it simple ignorance, or a pure and holy, but overly zealous concern for the Law? Or perhaps, it is pride and a disinclination to recognise God when He came before them? It is ultimately a lack of faith. Such a response to God is so familiar, both personally and in the world generally.

The challenge which Christ presents is one which pertains to the level of our faith. Just as He questions the faith of the scribes who rejected His ability to forgive sins, so the same question is posed to the members of the Church today - do we still believe in God? Do we believe in sin, in the forgiveness of sins and in the primacy of truth? For if we do, then such a radical and entirely correct belief must have a transformative effect upon our lives. Catholics must be known for having the faith of the Scriptures, which knows no surprise when sins are forgiven, since such a soul has an ardent faith in an omnipotent and perfect God. To God nothing is impossible, and so it is not surprising that He should have the power to forgive sins.

Of course this Gospel most evidently pertains to the sacrament of confession, a topic which was covered on this site a few weeks ago. However, it can also be examined in another manner, with the theological virtue of faith as the subject of the meditation. Because far more fundamental than the question of God being able to forgive sins, is the question of believing in God Himself. Do we believe in God? This is the question which underlies that which Christ posed to the scribes and is that which one must ask oneself every day. For once we say yes, and we surely must say yes, we are faced with the subsequent question. How does our belief in God affect our life? If our belief is like the scribes, a philosophical belief but not a lively and active belief, then there lies a problem!

For the scribes did believe in God, but could not live this faith and were thus unable to see Him before them. Their belief in God did not translate into a life full of virtue and seeking to do His will. It is so easy to fall into such a practice today, when we believe in God, (indeed we protest ‘of course we believe’) but do not put this belief into action of any sorts. For true faith is not just acknowledgment of, but rather a love of the Truth. True faith necessitates a response back to God. The faithful soul is thus described by St. Paul thus in the Epistle, “That in all things you are made rich in Him…so that nothing is wanting to you in any grace, waiting for the manifestation of our Lord Jesus Christ”.

Such is the manner in which faith affects a soul. The saints repeatedly mention that in the moment of temptation, if one could only recall the great love of God for us and the sufferings He has endured, then we would not dare to offend Him by sinning. This is faith in action! At the time of temptation the devil seeks to dim our active profession of faith in God, because if we truly pondered the majesty and beauty of Him who we believe in, then sin could have no attraction.

It is in this manner that the Gospel questions our faith. It is as if Christ, instead of admonishing the scribes, looks directly at each of us to say: ‘Do you believe in Me? Why then do you not order your lives accordingly? How can it be that you profess belief in Me and yet are afraid to declare it or undertake the sacrifices which true faith and charity demand?’

In many ways, this loving rebuke from our Redeemer is far more terrible than that which was directed to the scribes. We have received Baptism, Confession, Confirmation and countless Holy Communions and yet remain unable to act in a manner which is consistent with true faith. How many times do our actions more resemble a rejection of God instead of a firm faith in Him? Personally I know this is so. Indeed, how many times do the actions of those around us, even the clergy and the hierarchy of the Church, seem to demonstrate a lack of true belief and faith in God?

Perhaps this monumental crisis of faith, even amongst those who have received many sacramental graces, is one great cause for the many evils of the current age. The Church of God has drastically and so prolifically turned away from Him. Her pews have been filled with abominations of pagan worship, scandals of morality and faithful defenders of the truth have been persecuted. ‘Ah, but you are too rigid’ cry the modernists, ‘of course we believe in God, for are we not Catholics?!’. And yet, the fruits of those very same people demonstrates an effective lack of belief in He who died on the cross to save us. They lead so many souls along with them into a darkness of effective atheism.

Rightly so does Archbishop Vigano state that the only way to escape this crisis is “to recognize the deviation from the right path, retrace the path taken and take the path that Our Lord marked with His Blood: the way of Calvary, of the Cross, of the Passion”. (1) As with all in the spiritual life, the most perfect answer is found in the cross, for here is where true faith is proven. Thus the Gospel calls us to a more lively and perfect profession of faith, so that we might be “made rich in him, in all utterance and in all knowledge” according to the words of St. Paul’s epistle. The current times call for radical action - our faith must necessarily be marked by a radical nature, not by softness or lip service. True faith demands a conversion of life to God.

1:  Archbishop Vigano, Statement regarding the dismissal of Cardinal Becciu. 2/10/2020/ https://www.lifesitenews.com/blogs/vigano-amid-vatican-scandals-pope-francis-has-dealt-the-most-devastating-blows-to-papacy-church