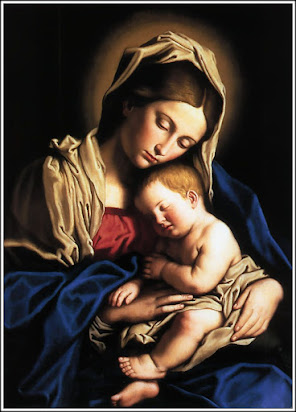 Whilst not commemorated in the Mass, today marks the ancient feast of the Motherhood of the Blessed Virgin Mary. Pope Pius XI extended the feast to the universal Church in 1931, after it was originally celebrated chiefly in Portugal. Having a time devoted to commemorate the Motherhood of Mary in this part of the year, as apposed to the new date of the 1st of  January, allows one to more fully dwell on the feast without the distractions of Christmas.

The Divine Maternity of Mary is the chief title under which we have recourse to her, and it is on account of this truth that all others can be understood. It is of course the first of four Marian dogmas which have so far been declared by the Church. The Council of Ephesus established the title of Mother of God in 431. This title is essential not only to understanding Mary, but also to understanding Christ. Due to being the Mother of God, we thus proclaim the other three Marian dogmas, her perpetual virginity, her Immaculate Conception and her Assumption.

What then can be said about the Divine Maternity? Firstly it must be noted that being the Mother of God was the highest honour bestowed to Mary. It is by virtue and necessity of this title that she is the Mediatrix of graces and the Co-Redemptrix of the human race. Pere Neubert notes that “Mary was created only in order to become the Mother of God”.(1) Her life was centred upon the fulfilment of this direct call from God, and every action was ordered to the perfection of her Divine Maternity. As a result therefore, whilst praying to Mary under various titles, it is important to pray to her especially under the title of Mother of God.

Whilst this title and this maternity is so great a privilege, it can be easy sometimes to lose sight of the fundamental aspect of Mary’s role as Mother of God. Yet just like any mother, the Divine Maternity is chiefly a role of love. To think on Mary without thinking on her love is to divorce her from the greatest virtue which moved her throughout her life - love of God.

The Divine Maternity is thus a life of love given in service to God first. From the very moment of the Annunciation, when Mary unconditionally united her will to God’s and offered a fiat of loving acceptance, her life was marked by this exceptional perfection of love of God. In that moment when she was presented with the greatest privilege of all, Mary’s heart was full simply of humility and love. The saints and Mariologists through the ages teach that at the moment of the Annunciation, Mary was aware of the entirety of the sacrifice that the Divine Maternity would involve. She knew the awful pain of the seven sorrows which she would endure, the agony and death of her Son, which she would be intimately united with, and yet her only response was loving unison to the Divine Will.

In this manner we can see that Mary’s life is marked above all by a perfect love of God. Her love is not merely submissive, acquiescing to all that is asked of her. Rather, she sees the will of God and makes His will her own, longing for all that He desires, precisely because His Will is perfection itself.

We can also contemplate the Divine Maternity as a life of love poured out in joint sacrifice with Christ. In dwelling upon the seven dolours, one notes that Mary’s life is marked by sorrow, but a joyful sorrow, since she is performing all that God asks of her and is doing so for the salvation of souls. But most especially, her Divine Maternity is demonstrated in the role she played on Calvary as Co-Redemptrix. Her role as Mother of God necessitates that she be thus united with Christ at this crucial moment. To do otherwise would be to abandon her Son in His hours of suffering and this is something which the perfect mother could not do. Consequently, not only does she unite herself to Christ in His passion and death, but she sacrifices her own will and actively wills for the completion of His passion, since she knows it is the means by which souls will be saved.

Mary’s role as Mother of God would not be complete however, if it did not entail becoming a mother in the spiritual order to all those who believe in Christ. From the wood of the cross, Christ gave His mother to us with the words, “Woman behold thy son…Behold thy mother”. (John 19:26) As mother of Christ she ardently desires to bring all souls to know and love Him, so that they might share in the Divine intimacy which it is her joy and honour to possess. As such, her heart is full of love not merely for her Divine Son, but for all her faithful children who wish to follow Christ. We are children of God and are given to the special custodianship of Mary. It is under her mantle of protection that souls will find the safest and surest path to heaven. St. Louis de Montfort writes that “she is the sure means, the direct and immaculate way to Jesus and the perfect guide to him, it is through her that souls who are to shine forth in sanctity must find him”.

It is through Mary the Mother of God that we are given all graces, all supernatural life. Christ won life through His passion and death: Mary was intimately associated with this so as to earn the title Co-Redemptrix. Christ then pours out graces through the most perfect of vessels - His mother. Thus it is Mary who leads us to supernatural life after having given Life itself to the world. She is the ideal mother of Christ and of her children here below, since she is desirous only of the glorification of her Son and the sanctification of her many children.

In this manner therefore, we can contemplate the Divine Maternity, as a title in which the entire wealth of Marian truths are contained. By paying attention to this feast, one is able to thus return to a devotion towards the Blessed Mother under the title of Mother of God, for this out of all others, is most perfect and beautiful.