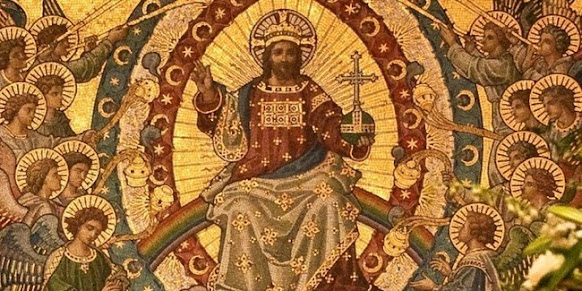 The feast of Christ the King is marked by a Gospel which draws not from some glorious account of His resurrection or triumph, but from passages on His passion. St. John’s Gospel recounts part of the dialogue between Pilate and Christ.

“Pilate therefore went into the hall again, and called Jesus, and said to him: Art thou the king of the Jews? Jesus answered: Sayest thou this thing of thyself, or have others told it thee of me? Pilate answered: Am I a Jew? Thy own nation, and the chief priests, have delivered thee up to me: what hast thou done? Jesus answered: My kingdom is not of this world. If my kingdom were of this world, my servants would certainly strive that I should not be delivered to the Jews: but now my kingdom is not from hence. Pilate therefore said to him: Art thou a king then? Jesus answered: Thou sayest that I am a king. For this was I born, and for this came I into the world; that I should give testimony to the truth. Every one that is of the truth, heareth my voice”.

Why is this the Gospel chosen for the glorious feast of Christ the King, when one is more naturally led to think of His majestic rule? The answer has already been mentioned on this blog, when shortly after Easter Sunday we meditated on how Easter can only be understood through the cross. Just as Easter only makes sense when we dwell upon the passion and death which occurred a few days earlier, so also the Kingship of Christ only makes sense when one again thinks of the cross.

One crucial point to draw from today’s texts is that even when beset on every side by the forces of the world and the demons, even within the Church, Christ reigns as King, Victor and Saviour. For even on the cross, when His enemies were rejoicing in having crucified the Messiah, Christ remained King and Saviour. There was no throne of marble, but of wood, no crown of gold but of thorns instead. Yet, despite the promptings of the devil and the works of evil men, His enemies remained unable to overthrow the Heavenly King, for it was through the most selfless act of love that He effected salvation and enacted the greatest victory.

This thought must serve to give us hope in days when Christ and His Church are attacked from all sides, without and within. True, there is currently no establishment of Christ as King in the world, with the whole of society looking to Him, yet it is up to the members of the Mystical Body to bring about this change. Led by His captains, the hierarchy of the Church, faithful Catholics can and must work to bring about societal change, so that the Kingship of Christ can once again be established in the world.

At present, the devil seeks to discourage any form of resistance to his work of corruption. With sin and error taught, even by the Vicar of Rome, it can seem pointless to follow Christ the King. Yet this is precisely what satan wishes - for good, faithful souls to lose their courage and hope, to throw down their weapons and sink into the sinful milieu which grows ever more pervasive. For every soul who decides to stop fighting, the devil rejoices and that soul contributes to the sorrow which Christ endured on the cross.

In contrast then, Catholics must look to the cross to guide us to the establishment of the Kingdom of Christ. The cross brings life and salvation. It is the sign of victory over sin and death and from its shadow the devil fleas in terror. The world rejects and scorns the cross, unable to comprehend the message of life which is found by clinging to it. But for Catholics, the cross is the very means by which we can move society so that Christ is hailed as King once more.

To this end then, we must not shy away from the spiritual battle that is so clearly before us, but with renewed courage, venture forth, firmly adhering to tradition and doctrine and teaching the faith unashamedly. With the cross as the standard and Christ as our King, there is no power that can stand before Him who conquers death itself. Even though each day brings fiercer battles than before, if we fix our eye on the cross, then we see only the prize and care not for the trials which we must overcome.

This is the mystery of Christ’s Kingship, this intrinsic link to the cross. In days gone by, when the world paid proper homage to God as Creator, the spirit of the cross was truly present. Saints, scholars, theologians, monasteries and saintly families sprung up and blossomed, all from keeping close to the cross. St. Louis de Montfort talks of the Royal Road of the Cross - he calls those who keep to this way, crusaders on the battlefield, who refuse to give even an inch to the foe before them.

“Evil spirits are united to destroy you; you must be united to crush them. The avaricious are united to make money and amass gold and silver; you must consume your efforts to acquire the eternal treasure hidden in the Cross. Pleasure seekers unite to enjoy themselves; you must be united to suffer”. So teaches St. Louis de Montfort. He is aware that such a road is not easy, and requires an abnegation of spirit in the face of so much temptation. But one who devotes himself to the cross, who becomes a Friend of the Cross, “is one chose by God, from among thousands who live only according to their reason and senses, to be wholly divine, raised above mere reason and completely opposed to material things, living in the light of pure faith, and inspired by a deep love of the Cross”.

The devil can never hope to even come near to overcoming Christ the King, precisely because he cannot bear the thought of that sacred wood. Even though he might have his most devoted followers in every exalted position, advocating the greatest moral depravities in every country on earth, still he cannot even come close to the glory of Christ the King, since he despises the cross.

As a close, we shall turn to the words of Pope Pius XI, taken from his encyclical Quas Primas, by which he established the great feast which we celebrate today. The pontiff explains the true nature of the Kingship of Christ and of His realm.

“Let Us explain briefly the nature and meaning of this lordship of Christ. It consists, We need scarcely say, in a threefold power which is essential to lordship. This is sufficiently clear from the scriptural testimony already adduced concerning the universal dominion of our Redeemer, and moreover it is a dogma of faith that Jesus Christ was given to man, not only as our Redeemer, but also as a law-giver, to whom obedience is due.”

“This kingdom is spiritual and is concerned with spiritual things. That this is so the above quotations from Scripture amply prove, and Christ by his own action confirms it. On many occasions, when the Jews and even the Apostles wrongly supposed that the Messiah would restore the liberties and the kingdom of Israel, he repelled and denied such a suggestion. When the populace thronged around him in admiration and would have acclaimed him King, he shrank from the honour and sought safety in flight. Before the Roman magistrate he declared that his kingdom was not of this world.”

“The gospels present this kingdom as one which men prepare to enter by penance, and cannot actually enter except by faith and by baptism, which, though an external rite, signifies and produces an interior regeneration. This kingdom is opposed to none other than to that of Satan and to the power of darkness. It demands of its subjects a spirit of detachment from riches and earthly things, and a spirit of gentleness. They must hunger and thirst after justice, and more than this, they must deny themselves and carry the cross.”

“Christ as our Redeemer purchased the Church at the price of his own blood; as priest he offered himself, and continues to offer himself as a victim for our sins. Is it not evident, then, that his kingly dignity partakes in a manner of both these offices?”

“When we pay honour to the princely dignity of Christ, men will doubtless be reminded that the Church, founded by Christ as a perfect society, has a natural and inalienable right to perfect freedom and immunity from the power of the state; and that in fulfilling the task committed to her by God of teaching, ruling, and guiding to eternal bliss those who belong to the kingdom of Christ, she cannot be subject to any external power. The State is bound to extend similar freedom to the orders and communities of religious of either sex, who give most valuable help to the Bishops of the Church by labouring for the extension and the establishment of the kingdom of Christ. By their sacred vows they fight against the threefold concupiscence of the world; by making profession of a more perfect life they render the holiness which her divine Founder willed should be a mark and characteristic of his Church more striking and more conspicuous in the eyes of all.”

“If We ordain that the whole Catholic world shall revere Christ as King, We shall minister to the need of the present day, and at the same time provide an excellent remedy for the plague which now infects society. We refer to the plague of anti-clericalism, its errors and impious activities. This evil spirit, as you are well aware, Venerable Brethren, has not come into being in one day; it has long lurked beneath the surface. The empire of Christ over all nations was rejected. The right which the Church has from Christ himself, to teach mankind, to make laws, to govern peoples in all that pertains to their eternal salvation, that right was denied. Then gradually the religion of Christ came to be likened to false religions and to be placed ignominiously on the same level with them.”

“We firmly hope, however, that the feast of the Kingship of Christ, which in future will be yearly observed, may hasten the return of society to our loving Savior. It would be the duty of Catholics to do all they can to bring about this happy result. Many of these, however, have neither the station in society nor the authority which should belong to those who bear the torch of truth. This state of things may perhaps be attributed to a certain slowness and timidity in good people, who are reluctant to engage in conflict or oppose but a weak resistance; thus the enemies of the Church become bolder in their attacks. But if the faithful were generally to understand that it behooves them ever to fight courageously under the banner of Christ their King, then, fired with apostolic zeal, they would strive to win over to their Lord those hearts that are bitter and estranged from him, and would valiantly defend his rights.”