Good Friday - the cross that defeats the hatred of the world 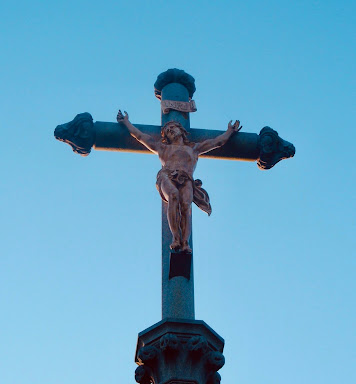 “The amiable Redeemer approaches the end of life. My soul, behold those eyes grow dim; that beautiful countenance becomes pale; that heart palpitates feebly; that sacred body is abandoned to death.” So writes St. Alphonsus Ligouri in his treatise The Passion and Death of Jesus Christ.

The many weeks of Septuagesima and Lent culminate in this day, wherein God Incarnate lays down His life for sinful man. The crowds who welcomed Him into the city so loudly on Palm Sunday, now issue an even louder call for His death. He has not conformed to their desires and expectations, and so they have turned against Him. Ligouri notes that the Jews were deluded about the coming of Christ, expecting earthly and temporal blessings instead of spiritual and eternal ones, and thus rejected Him. “The world-minded, who love the riches, the honours and the pleasures of earth, refuse to have Jesus Christ for their king; because as far as this earth is concerned, Jesus was but a king of poverty, shame, and sufferings.”

His words of truth, conversion and sacrifice, did not change the hearts of those who ignored truth, rejected conversion, and called only for His sacrificial death. In the minds of people such as these, both then and now, God has been defeated by death, and they have proven to the world that they are their own gods - or so they think. “His blood be upon us,” they cried and continue to cry.

The crucifixion demonstrates the true nature of those devoted to the world: they are concerned only with that which will satisfy their lower, earthly desires, they will ignore all that is true, good and beautiful in order to attain it.

Most of all, such souls reject the notion of sacrifice. Christ presented a dilemma to these souls, as they were faced with all that they chose to reject, and asked to accept Him instead of themselves. They chose: the result, was the bloody passion and death of the Redeemer.

Thus the crucifixion shows where attachment to the world leads - it leads ultimately to a rejection, and deliberate partaking in the murder of Truth Incarnate. “The wages of sin is death,” writes St. Paul, and the rejection of Christ leads ultimately to death. The Jews rejected Christ, and called for His blood to be upon them; in like manner these in the world who reject Him today can hope for no better reward than their predecessors. “He that is not with me, is against me: and he that gathereth not with me, scattereth.” (Matt 12:30)

In fact, the world by necessity, hates the cross and all that is associated with it. The world must do so, because if it were to cease its constant attacks on Christ and His salvific act of sacrifice, then those in the world might be allowed the chance to dwell on the truth of that awful sacrifice, which in turn might move them to a conversion of heart. This of course, is directly against the devil’s wishes, and so he spurs on his agents to wage a relentless war against the cross and all who seek to answer the call of Christ.

Just as Christ was tortured and killed, so should His followers expect to be. Scorn and derision directed towards the friends of the cross, are the most common tools used by the world. Yet such is the hatred for faithful souls, that the children of the world - those agents of the devil - will have no qualms at enforcing bloody persecutions on any who do not conform to their rejection of Truth. The Church has been sustained by the blood of Her martyrs throughout the centuries, and in the wake of the anti-Catholic global agenda which is being ruthlessly pursued, such scenes are likely to occur again.

As the agents of the world levy increasingly prohibitive sanctions on those who do not conform to the anti-life agenda, particularly against those who will reject the abortion-tainted injections of our time, they will seek to make the cross a thing of horror. These servants of satan will do everything in their power to weaken the resolve of faithful souls, so that the call of Christ for men to pick up their cross and follow Him, will go largely unanswered.

Such dark souls will try to do to friends of the cross, what they did to Christ - persecute, torture and kill.

And yet, even despite this terrible outlook, there is hope. Hope springs eternal from the cross, because it is that very tree which is the path to salvation. The world will seek to make it heavy, painful and arduous, yet this is precisely the suffering which Christ endured, and to which He calls all. Indeed, St. Louis-Marie de Montfort writes thus about carrying the cross: “But if, on the contrary, you suffer in the right way, the cross will become a yoke that is easy and light, since Christ Himself will carry it with you. It will give you wings, as it were, to lift you to heaven; it will become your ship’s mast, bringing you smoothly and easily to the harbour of salvation. Carry your cross patiently, and it will be a light in your spiritual darkness, for the one who has never suffered trials is ignorant.”

Contrary to the wishes and plans of the world, the cross can never be a symbol of ignominy or meaningless suffering, since our Captain has made it the means of life! We are thus called to blossom and grow with the truth of God and the abundance of grace found in the spiritual life. Faithful friends of the cross study the science of the Divine, the pursuit of worldly death and spiritual abundance. In the cross they find the source of this life, and when accepting the cross, they find Divine life itself.

The crucifix is that which shames and offends the world, but “is the abridgement of all that a Christian ought to believe [and] practise”.

On this Good Friday then, whilst the world seeks to prohibit worship, let us spend time before the crucifix, gazing in love and sorrow at the wounds inflicted upon our precious Saviour, counting the number of lacerations He bears and the thorns in His crown. Let us reflect upon the nails which fasten Him to the wood of the cross and recall the agony which He endured whilst hanging there. Then let us remember that He did so for us and for our salvation, in order that we might be freed from servitude to sin and join Him in heavenly felicity. The almighty and perfect God freely endured such torments and agonies, in order that we, unworthy as we are, might have a share in His Divine life.

This brief gaze at the cross is more profitable than any trumpet call or proudly flying flag on the battlefield, more delightful than any of the empty delectations which the world can offer. It should serve to remind us of our end and the means by which we are to attain it.

The many wounds upon the body of Our Lord stand as a constant memory of the heavy price which He paid in order that we might be like unto Him. Then, moved by such love, we must heed His call, and hasten to ascend Mt. Calvary in order to take His place upon the cross. We could not have received any greater proof of God’s love and so we must return such love to Him in the same way.

Let us welcome the cross, sing for joy when we see it, and cry out to He who cannot love more perfectly - ‘O sweetest Jesus, who so wondrously died for me upon the cross; take me unto Thyself; allow me to draw near to the cross and fix myself there in your stead, so that I might, through faithful imitation of Thee, attain to the intimacy of Thy most Sacred Heart. On this cross Thou gavest Thy life for me: now may I give mine for Thee. Mary, my dearest Mother, hold me, so that I might not waver in my resolve, but eagerly die for love of Him.’

Thus writes St. Alphonsus in his meditation for Good Friday:

“O my dear Redeemer, well do I recognise in these Thy wounds, and in Thy lacerated body, as it were through so many lattices, the tender affection with Thou dost retain for me. Since then, in order to pardon me, Thou hast not pardoned Thyself, oh look upon me now with the same love wherewith Thou didst one day look upon me from the cross, whilst Thou were dying for me.

Look upon me and enlighten me, and draw my whole heart to Thyself, that so, from this day forth, I may love none else but Thee. Let me not ever be unmindful of Thy death. Thou didst promise that, when raised up upon the cross, Thou wouldst draw all our hearts to Thee. Behold this heart of mine, which, made tender by Thy death, and enamoured of Thee, desires to offer no further resistance to Thy calls. Oh, do Thou draw it to Thyself and make it all Thine own.

Thou has died for me, and I desire to die for Thee; and if I continue to live, I will live for Thee alone. O pains of Jesus, O ignominies of Jesus, O death of Jesus, O love of Jesus: fix yourselves within my heart, and let the remembrance of you abide there always, to be continually smiting me and inflaming me with love. I love Thee, O infinite goodness; I love Thee, O infinite love. Thou are and shalt ever be, my one and only love. O Mary, Mother of love, do thou obtain me love.”