Good Shepherd Sunday - faithful shepherds point only to the cross. 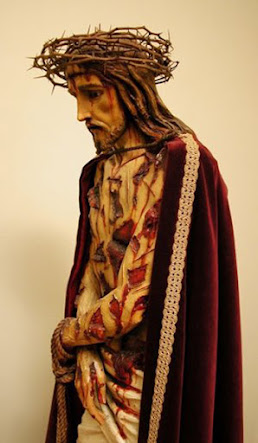 “Ego sum pastor bonus.” With these words, this Sunday has become rightly known as Good Shepherd Sunday, and many images have been produced through the ages, of Christ as the shepherd amongst His flock, carrying them to safety and guarding them from danger.

The Church has as her guardian, the faithful Shepherd, who will never let the gates of hell prevail against her, nor allow evil to triumph. He has secured this by working the act of salvation, dying on the cross to save man from the clutches of sin and death, and defeating the devil for eternity.

In response to this act of perfect love, we are called to be like the sheep who recognise their shepherd and come running to Him. Just as a shepherd protects his sheep with his staff, Christ protects His children with the wood of the cross. The Catholic Church provides the sanctuary for faithful souls, just as the gates of the sheepfold keep out the prowling wolves, hungry to devour the sheep.

But as with every flock, there is an important rule to be kept if one is to ‘benefit,’ so to speak. A sheep cannot be protected if it strays from the herd, leaving the watchful eye of the shepherd and the safety of the farm, and wandering instead into the wilderness, where wild animals might attack and devour it. If the animal is to remain alive, he must adhere to his shepherd.

So it is with faithful souls and their relation to Christ. One must stay close to Christ and His Church, through the faithful practice of the spiritual life, cultivating the virtues, and seeking to grow in perfection in imitation of the shepherd. Life is found within the Catholic Church, by careful adherence to Her timeless teaching and Her Tradition, but if one deliberately strays from the Church, or the path of virtue, he opens himself to the attacks of the world and the devil.

In the corruption of truths so often worked by modernity, Good Shepherd Sunday can perhaps be viewed as a day of softness, with images of a sweet, smiling Christ surrounded by sheep, devoid of a reminder of the agonies and torments which He suffered for our salvation. As modernity and liberalism dominate the Church today, seeking to corrupt Her teaching and Tradition, such advocates of error seem to take great pleasure in pushing the idea of a ‘soft’ Christ, and a ‘soft’ Church, and increasingly avoid mention of suffering, of the cross, or of truth.

False concepts of ‘fraternity’ are proposed as the way to supposedly bring all peoples to the knowledge of the true faith, whilst the very process of this fraternal action involves watering down the faith, and undermining the Church’s teaching. The proponents of this ideology can be rightly described as false shepherds. They have been called to lead the people of God, safeguarding the flock of the Lord, but in actuality they are opening wide the gates and leading the flock into pastures full of danger.

These false shepherds do not seek the Truth, salvation, or even adherence to Christ, but instead they desire the softness and comfort of life, that which is depicted in the pleasant images of Christ which they favour to the point of an almost studious avoidance of the cross.

Regrettably, with so many of these individuals present and influential in the Church, is it really surprising that Catholics across the world are devoid of the spirit of fervour and radicality, which marked them out in more faithful times? For decades, Catholics have been told not to worry about the more troublesome or difficult aspects of the faith, since God is a soft, kind, loving God, and ‘He will understand. Don’t worry.’

With these words, portrayed as acts of kindness towards Catholics beset by the trials of life, false shepherds have done nothing less than rejected Christ, scorned Him on the cross, and abandoned His flock. They have received the shepherd’s crosier, accepted the mission to guard and promote the faith, and yet swiftly broken their staff, spat upon the cross, and abandoned their charge.

The true extent of this damage to the Church is perhaps only being seen in very recent times. The unprecedented church closures across the world, supposedly in the name of health, were led initially by bishops, who volunteered to cut off their flock from the divine life of the Church, and prevent their access to the sacraments. Encouraged by this free gesture of subservience, governments are now acting with a free hand to close churches in the name of health. In previous eras of persecution, bishops and priests endured torture and death, rather than do what todays clerics have so freely, even eagerly, done.

Influenced by the long history of the diluting of the Catholic faith, large numbers of people have seen no issue with being separated from the sacraments, or barred from the Church. They have been led into the spirit of the world by their false shepherds, trained not to think, and so are largely unaffected by the deprivation of their baptismal right.

These current days are truly the result of a long process of an attack upon the Church and upon Christ Himself. It is a process greatly accelerated in recent decades, but one which has its origins in the decadence in the Church and the accompanying Protestant revolution many generations ago.

For centuries, the enemies of God have attacked His flock, whether it be through bloody persecution, egregious laws which greatly infringe upon the lives of Catholics, or through infiltrating the Church Herself.

Now, at long last, these enemies are rejoicing, for they believe they have won, (though of course this is a false belief.) Their goal is almost complete - unlike in previous times, no persecution was necessary for the churches to close, as bishops did that themselves; no persecution was necessary for the faith to be undermined, since councils, episcopal documents, papal teachings and the current pontiff especially, have already done that themselves; no persecution was needed for Catholics to thus disregard their faith, because encouraged by the witness of false shepherds, they have abandoned reason, faith and God, for the promise of earthly safety.

The suffering of the faithful; the danger of false shepherds today.

And yet, even though no persecution was necessary for all this to be accomplished, one must not be naive. Such a persecution is indeed coming.

The devil and his agents are consumed with hatred for God and His Church, and though many in the Church have abandoned the faith, the small, faithful few who remain, are enough to engender a response from the satanic forces. Satan will not rest until all the world is in his service. Soon it will be the case that faithful Catholics will once more be barred from normal life, cut off from their own family and friends, left penniless, hungry, beaten, tortured and killed.

These events will be the wild death-throws of the devil, aware that he has already suffered defeat, and seeking to destroy as many souls as possible before Christ appears once more in glory.

In these moments of persecution, which are already happening in a bloody manner in certain countries such as China and North Korea, we must bear in our minds the image of the Good Shepherd. We must have recourse to this Man of sorrows, who was scourged, beaten, spat upon, insulted, stripped, and crucified - all for our sake.

Christ calls us to follow Him, and as faithful sheep we must do just that, even though this call is ultimately one to the cross. In gazing upon the crucifix, the true image of the Good Shepherd, we see the reality of the depth of love which God has for man. We see the terrible sufferings which He endured for each soul, and we hear the call which He ceaselessly issues: “If any man will come after me, let him deny himself, and take up his cross, and follow me. For he that will save his life, shall lose it: and he that shall lose his life for my sake, shall find it.” (Matt 16:24)

The false shepherds and the devil will seek to dissuade us from answering that call. They will find all manner of ways to justify evil; to promote crimes against the divine and natural law (such as abortion and homosexuality). They will seek to ensnare all people in the promotion of these crimes, since the devil’s goal is to have as many souls as possible joining him in offending God by the rejection of Truth and goodness.

Such false shepherds, who by their nature are in the Church, will be even amongst the so-styled ‘conservatives.’ They will try to prevent faithful souls from dwelling on the martyrs of old, and instead will use equivocation to justify the rejection of Catholic morality. They will promote and teach about that which is ‘just acceptable’ for a Catholic to do, in order to avoid hardship, but avoid teaching about that which one ought to do.

These false shepherds will even become complicit in promoting evils, such as abortion, as they convince Catholics that there are some circumstances - such as potential hardship or personal gain or personal health - when tearing apart a tiny baby, extracting his tissue whilst still alive, and then using it, are acceptable. They might justify this in the same way they paint a false image of God, namely by avoiding the gruesome reality.

So on this Good Shepherd Sunday, faithful souls are called to dwell on the Saviour, the crucified Redeemer who is covered in blood and His flesh torn. This Good Shepherd leads us to life and to salvation, and one must thus follow Him closely, even - nay always - unto the cross, since it is through the cross that He brings life.

False shepherds cannot understand the cross, they flee from it, allowing themselves to be governed by fear, instead of by faith. Faithful souls are called instead to run to the cross, accepting the sorrows and trials which God grants to them for their salvation, knowing that it is only through the cross that Life and Truth are found.