Low Sunday - ‘know the place of the nails and be not faithless, but believing.’ 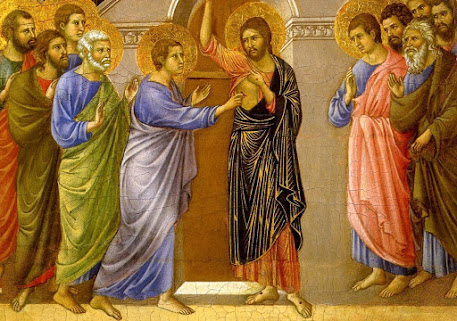 On this Low Sunday, the octave of Easter day, the Church presents the Gospel account of St. Thomas, the passage which has led to his styling as ‘doubting Thomas.’

There are many similarities between St. Thomas, and the state of world today, particularly in light of the chaos caused by the globalist response to COVID-19.

One week after Easter day, Catholics around the world find themselves struggling for Easter joy, since persecution is coming from all sides. Whether it be in the form of confusing, anti-Catholic or globalist style pronouncements from Pope Francis, or another directive from an increasingly tyrannical government curtailing freedoms, particularly that of worship, the faith is clearly under attack.

Confusion and chaos reign, disorder is allowed to grow unchecked, whilst the rights of countries, individuals and the Church are directly scorned and rejected. There can be no doubt as to this reality, nor as to where it is leading.

Perhaps then, it is not hard at all to emulate the doubting Thomas, instead of St. Thomas, that is to say, perhaps it is easier to copy his lack of faith as portrayed in today’s Gospel, rather than his great faith which sustained him through martyrdom.

In the face of so much persecution, hardship, evil and freedom accorded to the devil in today’s society, a reaction of doubt as to the veracity of the resurrection might even seem more logical and understandable.

Has Christ really defeated sin, one might ask? Is the Church true to Her calling, as the bride of Christ, or has She become instead the bride of the world? What use is faithful opposition to the forces of evil, when they seem so powerful, so all encompassing and so inevitable?

But, this is not the way of the cross on which Christ died for us only days ago. Allowing oneself to harbour such doubts, leads instead to the ‘way of the couch’ and this cannot lead to salvation. The devil loves this ‘way of the couch’, though, and he fosters doubt wherever he can.

He is well aware of the supreme, and utterly astonishing victory which Christ has won over sin and death. Completely unable to do anything to challenge this Divine victory (which is his defeat), the devil attempts to make Christ’s followers doubt the effectiveness of the cross. Satan seeks to cloud the light which Christ shines into the world: he tempts souls to ask questions such as those posed above, trying to make the way of the cross seem too arduous, or unrewarding.

He paints a false image of the forces of evil, attempting to make his demons appear all powerful, when in reality they are powerless and only permitted to act in accordance with the will of God.

Faithful souls today are called to remember the truth of the cross, for while satanic forces rejoice at the cruel death inflicted on the Son of God, that very same death seals the eternal damnation and condemnation of the demonic forces. Christ’s death brought life and confounded the devil.

Hence, not only this Easter, but throughout the entire year, we are called to remember the events of Good Friday and Easter Sunday, knowing that sacrifice has led to life, and that our salvation is found through that sacrifice. This must give us hope and joy, even when the world and the devil seek to undermine this and make all seem lost.

The victory has already been won - satan has been defeated and we have nothing to fear!

Christ, the eternal high priest, the Lamb of God and the innocent victim, allows us to experience toil, hardship, persecution and sorrow, in order to purify us so that we might more fittingly approach Him in heavenly glory. He calls us to follow Him, and unlike the devil, Christ is Truth, who cannot deceive. He is the Word Incarnate, the Way, the Truth and the Life.

Hope is found only by following Christ and clinging to the cross, and the more the devil attempts to make the cross seem arduous, the more faithful souls are called to hold onto its beams ever more closely.

Just as Christ called St. Thomas to put his finger into His side and believe, He calls us on this day to come and join Him on the wood of the cross, to receive Him in the holy sacrifice of the Mass daily, and to give witness to His truth through our daily actions.

“Blessed are they that have not seen, and have believed.”

But even though we do not have the awful honour of beholding Christ face to face, as did the apostles, we are given the privilege of receiving His body, blood, soul and divinity in Holy Communion. He has given us Himself in this sacrament, the unbloody sacrifice of the cross, so that we might be more able to conform ourselves to Him, and strengthen our faith so as to join Him on that same cross.

Hence, whilst the world and the devil seek to create an anti-Catholic, atheist world, actively seeking ways to insult and scorn God, we are called to have hope and faith. We are called to imitate the twelve, to go out and witness to the Truth in our lives, being ready to lose earthly life itself, if God so wills.

Persecution is not an occurrence merely of the past, nor limited to far off countries across the world. It is advancing ever more swiftly into the Western world, in a manner many could not have envisaged but a decade ago. The devil will make it seem terrifying: he will seek to weaken our resolve and attachment to Christ, so that when we are called upon to lay down our lives, we might crack and turn our back on Him.

But we must remember, Christ has won the victory! The devil has no power over us, and though times awful and terrifying may indeed appear, they are permitted, indeed allotted to us, by God, so that we may imitate Him on the cross. We have been placed in these very times, not in days of the past, nor in days of the future, be they easier or harder.

This Easter, we are called not to bewail the state of the world, but to fight back, to proclaim with renewed zeal our commitment to Christ, to the Catholic faith in its timeless teaching, and to the Church in all Her tradition. We are called to truly follow Christ and prepare ourselves to suffer and die in the upcoming persecution, scorning the temptations of the devil and instead answering the call of the cross.

The blood of the martyrs is the seed of the Church. Whatever the world will throw at faithful souls, let such souls be not afraid, for any suffering endured is short lived in comparison to an eternity with God.

“Put in thy hand, and know the place of the nails, alleluia; and be not faithless, but believing, alleluia, alleluia.”